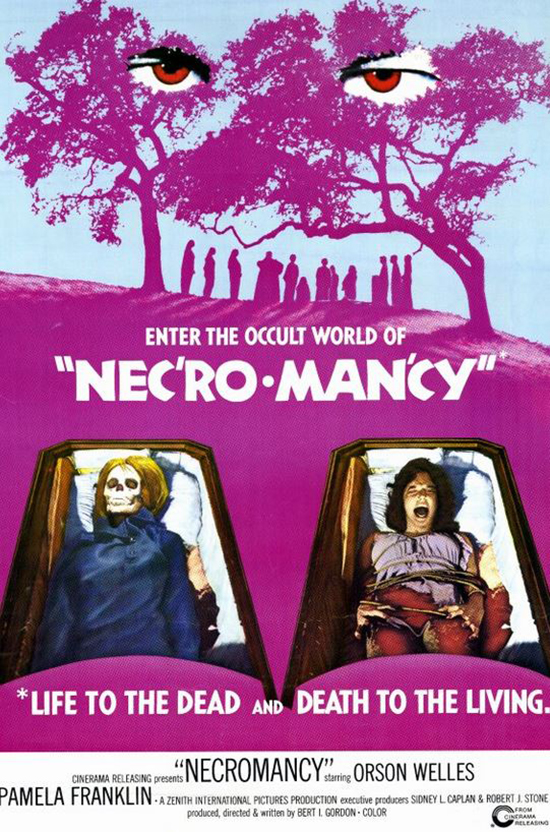 After losing her baby, Laurie and her husband Frank leave New York to start a new life in the small town of Lilith. But despite its bucolic façade, Lilith is no Mayberry. The local populous all practice witchcraft and Mr. Cato, the town’s patriarch has demonic designs on Laurie.

I vividly remember a Variety ad from the 1980s trumpeting, “When you want big box office returns just come to Mr. B.I.G. – Bert I Gordon!” It wasn’t all ballyhoo either— Bert I. Gordon was an indie filmmaker with big ideas. He packed his drive in era films with overgrown atomic mutations like The Amazing Colossal Man (1957) or mega sized grasshoppers in The Beginning of the End (1957) or rats the size of Toyotas in The Food of the Gods (1976).

But Mr. Big didn’t just produce, write and direct his films— he also created their special effects by combining rear projection with footage of normal animals. The quality of his special effects varied from impressive to ludicrous, sometimes within the same scene, but that was all part of their charm. 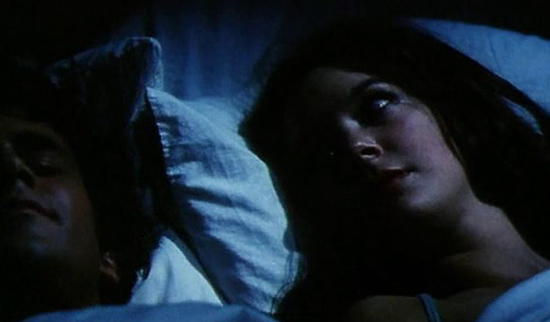 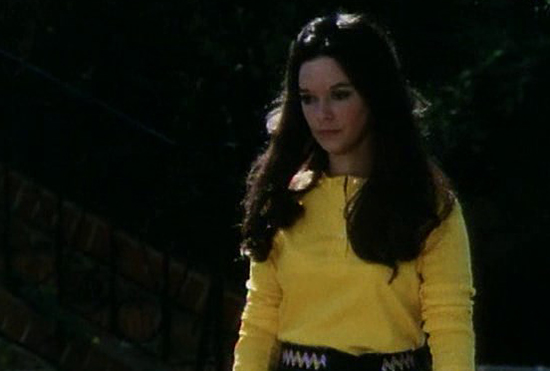 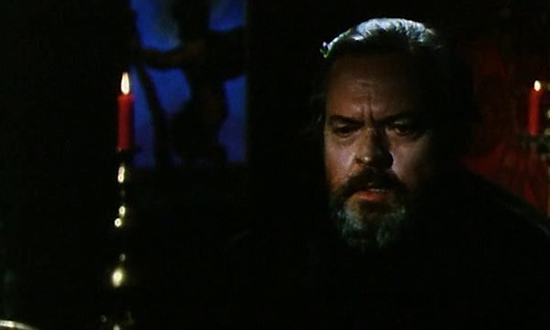 In 1972 he wrote and directed the Rosemary’s Baby inspired NECROMANCY, where the only onscreen giant was Hollywood legend Orson Welles, who’s girth had grown as big as his reputation. Unfortunately, it’s hard to tell if Gordon’s stab at an occult thriller was any good due to the radical re-editing and reshooting done after its brief theatrical release.

After failing to make an impact at the box office, Necromancy sank into obscurity until 1983, when Paragon Video acquired the home video rights. Paragon elected to hack out critical dialogue scenes while splicing in all new, all nude footage and re-titled this witches brew The Witching. They also released an alternate television version entitled Rosemary’s Disciples. Yeah, Paragon was a real class act. 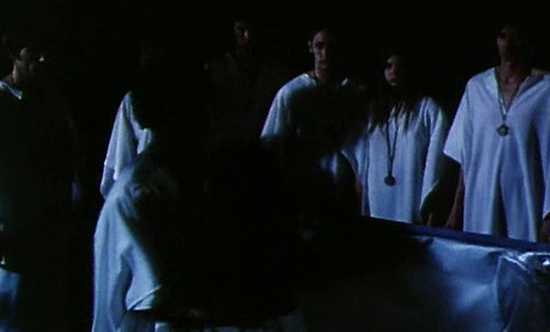 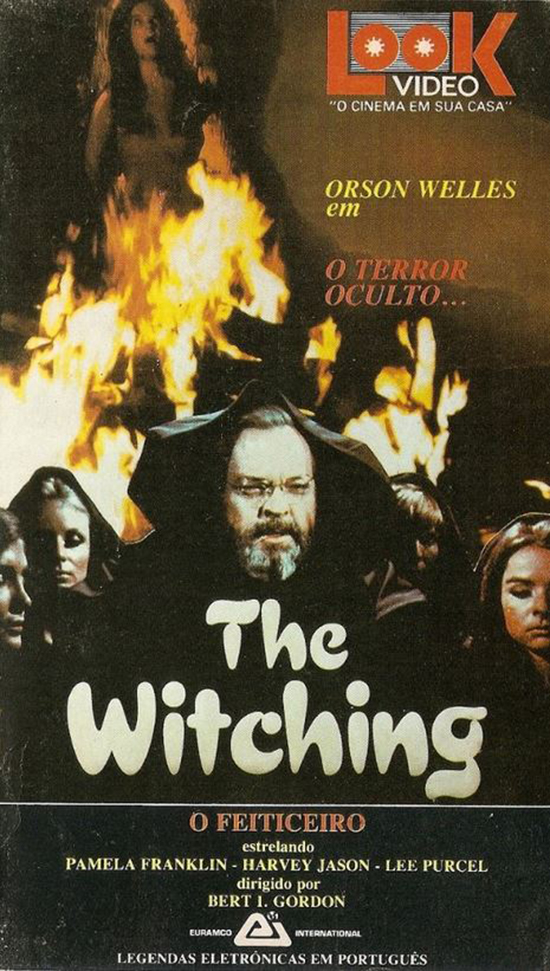 Altering films to increase distribution wasn’t a new concept. Renowned schlockmeister Al Adamson had made a career out of shooting half a movie, then transplanting it into another partially completed but unrelated flick. Dracula Vs Frankenstein (1971) is the most entertaining, but least coherent example of his cut and paste antics. But in the case of Necromancy neither director Burt I. Gordon nor any of the original cast was invited to the reshoots. Gordon was enraged by the results. You’ll just be confused.

Necromancy opens with one of those tacked on scenes featuring a coven of naked witches (including aspiring scream queen Brinke Stevens) writhing, moaning and performing some kind of satanic ritual. I’m a big fan of raunchy black masses, so I kind of enjoyed this tacked on prologue even if the goat headed coven leader looked more like a sports mascot than Lucifer.

Then we segue to the original film. It’s the tale of Laurie, a young woman who recently lost her baby during childbirth. Her husband Frank (Michael Ontkean) accepts a new job in the small town of Lilith, claiming that life in this tranquil village will help speed Laurie’s emotional recovery. They set out to begin their new life and things get very weird, very fast. This is also where the postproduction meddling becomes very apparent. 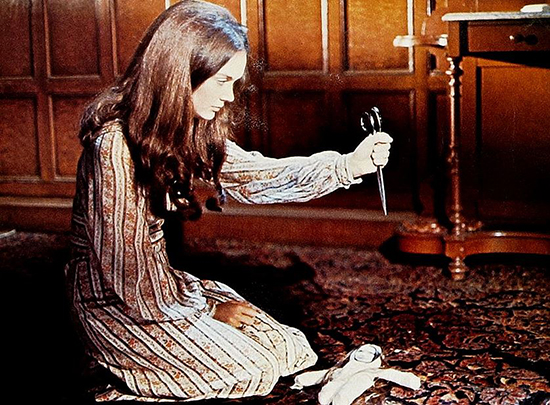 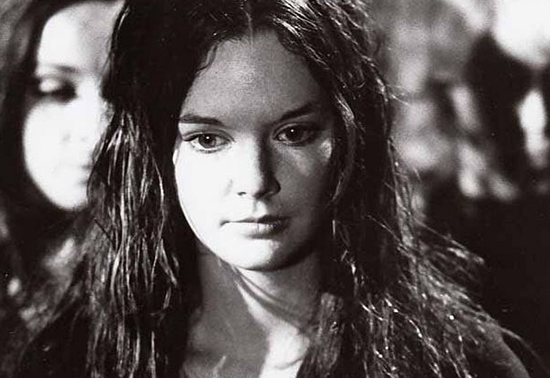 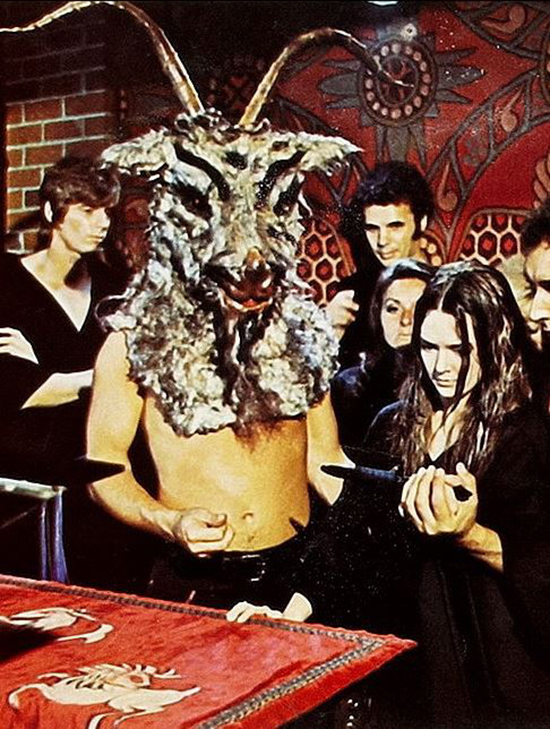 While driving erratically Frank accidently runs another car off a winding road, killing its female passenger. But Laurie and Frank don’t show an ounce of remorse over causing the accident. Police helicopters hover over the crash scene, but the cops never so much as issue the couple a traffic ticket. Laurie finds a doll among the burning wreckage and takes it with her despite it being a dead person’s property and also evidence. I’m assuming this seemingly callous behavior stemmed from Paragon’s haphazard re-editing.

Upon reaching the town of Lilith Laurie discovers that its residents all practice witchcraft and are eager to add her to their congregation. This isn’t revealed through any clever snooping on Laurie’s part— the locals just tell her outright. The village patriarch Mr. Cato, played by a slumming Orson Wells, explains that the town’s main business is manufacturing the world’s finest occult paraphernalia. Laurie’s husband Frank will become his right hand man in running the business.

The plot slowly unfolds revealing that Laurie’s lost baby and past experience at resurrecting the dead are vital to Mr. Kato’s supernatural plans. There’s also the ghost of a young boy, who was in the original version and a female ghost added during the re-editing who acts as a Greek chorus/narrator, explaining the plot. She fails miserably because the story’s an unholy mess.

The additional footage is often hilariously inappropriate, particularly when Laurie attends a wine and cheese party where the centerpiece is added footage of naked women feeding each other grapes. Laurie shows absolutely no reaction to this bacchanal, which makes sense considering it was shot ten years after the fact. 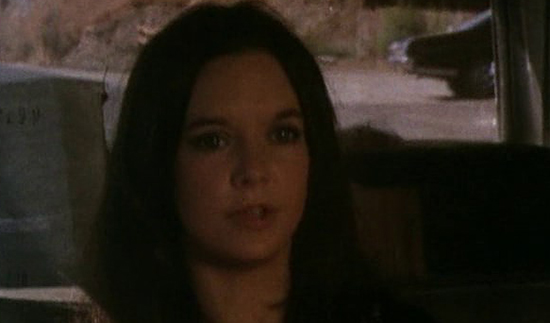 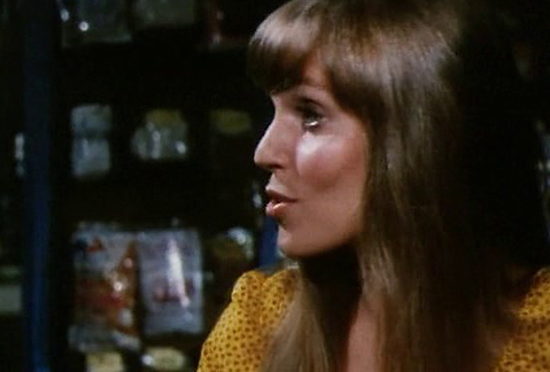 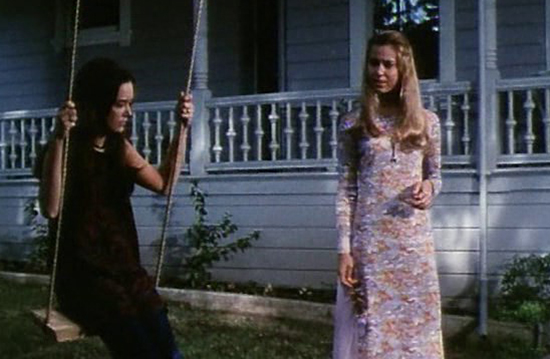 On the plus side Orson Welles is given some juicy monologues that offer a taste of his faded glory. Don’t forget, this was the man who terrified an entire nation with his War of the Worlds radio play and revolutionized filmmaking with Citizen Kane. His reward was having his reputation tarnished by a vengeful William Randolph Hearst (the real life Citizen Kane) and intense studio meddling on his later films. Welles was the Nicola Tesla of cinema— a man out of time, appreciated more after his death.

We also get a nice performance from Pamela Franklin. After her childhood debut in the classic ghost tale The Innocents (1961) Franklin became a horror film staple.  Some of her genre highlights include And Soon the Darkness (1970) and The Legend of Hell House (1973).  Necromancy includes her only onscreen nudity, so there’s some reason to endure the rest of the film. Franklin actually met her future husband Harvey Jason on this film, which according to her bio was “the only good that came from it.” But despite her dislike of Necromancy Franklin reunited with director Bert I. Gordon for his rampaging rodent romp Food of the Gods (1976).

Necromancy’s main crime is that despite the added exploitation elements it just isn’t fun to watch. Any fleeting joy is sucked away as you struggle to understand the story while enduring its lethargic pace. It’s hard to tell if you should blame Bert I. Gordon or the hatchet men at Paragon Video for its problems. So, rather than point fingers, I suggest you find a fun Gordon film like Food of the Gods (1976) or The Spider (1958) to experience Mr. Big in his giant monster element.

Code Red DVD allegedly released a legitimate version of Bert I. Gordon’s original edit, but I can’t find it listed for sale anywhere. So, I recommend waiting until someone unearths that lost version before exposing yourself to The Witching or Necromancy or Rosemary’s Disciples… because by any name it’s a disappointment.