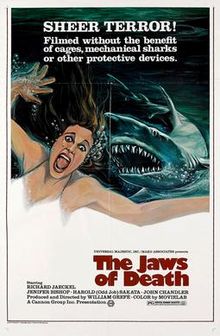 MegaCon Orlando in association with Fandomonium in Tampa Bay present the first annual MegaCon Orlando Saints & Sinners Film Festival, showcasing the very best domestic and international horror, science-fiction, and fantasy short films and features of the year!  Festivities begin on Saturday, May 27th at Noon in Room N319 at the Orlando Convention Center.
As a centerpiece of Saints & Sinners, the made-in-Florida cult classic Mako: Jaws of Death screens at 1pm on Saturday, May 27th in Room N319 at the Orlando Convention Center. Director, cult movie legend and Florida filmmaker William Grefé will be the special Guest of Honor and appear live in person!  Enjoy a lively, informative Q&A session + meet-and-greet with Grefé post-screening as he reminisces about the Mako production and Florida locales.  William Grefé will also be receiving the FIRST EVER MegaCon LIFETIME ACHIEVEMENT AWARD in a special ceremony following the screening/Q&A!
Released in 1976, Mako: Jaws of Death reexamines the classic Grefé cinematic themes of ecology, horror, and twisted human nature.  Richard Jaekel portrays “Sonny Stein”, a Vietnam veteran with an uncanny ESP connection to Mako sharks, originating from an eerie combat incident when he was saved by one.  Empowered by an occult medallion granted to him by a Filipino shaman, he uses his weird mental abilities to exact revenge on unscrupulous rascals who dare harm his beloved shark friends: a strip-club owner and quack scientist.  Like his 1972 rattlesnake hit Stanley, Mako spins the strange tale of a loner befriended by deadly creatures who only wish to be left alone.  Also stars Harold “Odd Job” Sakata, Jennifer Bishop (Impulse), and Luke Halpin (Flipper).
Saints & Sinners organizers are excited about their second time teaming up with MegaCon for milestone film festival events.  Rick Danford, festival organizer, exclaims: “Saints & Sinners is proud to be back, showcasing the immense talents of independent filmmakers, actors, and crew.  Our lineup is second-to-none, and we are very excited to team up with MegaCon for this special event that no movie fan should miss!”  Andy Lalino, co-organizer agrees: “We have a rich tradition of honoring the Cult Movie Masters who have shaped our appreciation of the fantastic.  We are honored beyond words to bring to the fans William Grefé, a living legend and one of the great Florida filmmakers.  We proudly present his made-in-Florida cult classic Mako: Jaws of Death.  The screening will be followed by a Q&A with William Grefé himself and a special presentation of a MegaCon Lifetime Achievement Award to be bestowed upon this irreplaceable master director.”
Plus: the Cast and Crew of the upcoming Action/Horror Web Series Dawn and the Dead will (www.dawnandthedead.com) be at the Saints & Sinners dealer’s booth (#3164) on Friday for pictures and autographing Exclusive promotional posters for the series.  And to all Zombie Cosplayers: Dawn and the Dead will be filming a special zombie horde scene at 10am on Saturday, May 27th – and anyone in Zombie make-up/costume may be part of the filming!
Celebrate with us Friday, Saturday and Sunday, May 26th – 28th as we present the MegaCon Orlando Saints & Sinners Film Festival with Special Guest director WILLIAM GREFÉ (Sat. only) at the Orlando Convention Center – Room N319.  Suggested parental supervision for children 17 and under.
Share