Home | ANOTHER EVIL In Theaters + Digital Platforms May 5th

ANOTHER EVIL In Theaters + Digital Platforms May 5th

A frightened husband goes behind his wife’s back to rid their vacation home of ghosts, but discovers that the supposed expert’s bizarre techniques may be causing more harm than good.
ANOTHER EVIL 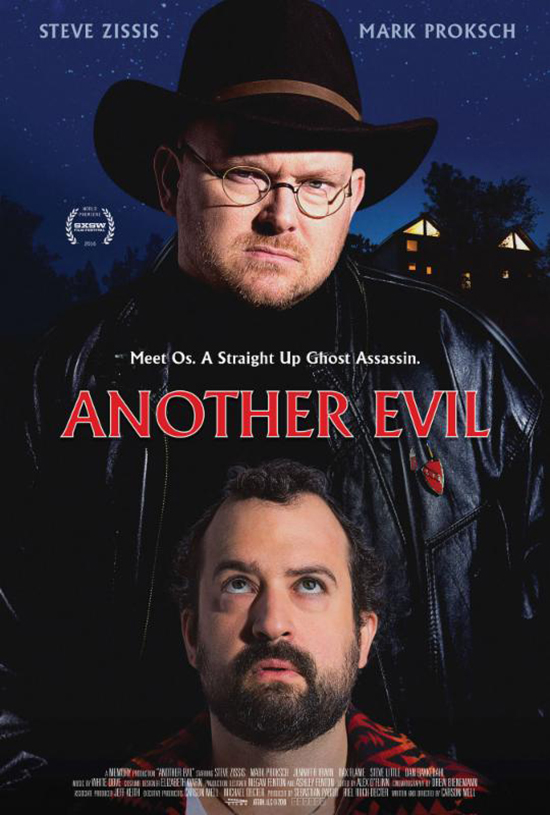 The Supernatural Comedy Festival Favorite Will Be Released In Select Theaters and on Digital HD on May 5, 2017
“Beautifully written, funny and awkward” – Anton Bitel, Sight & Sound
New York, NY (March 30, 2017)– Ridding your home of ghosts is serious business, but finding the right expert to do the job proves to be the real challenge in the new supernatural comedy, ANOTHER EVIL.  The film, a hit at SXSW, BAMcinemaFest and the Fantasia Film Festival, will be released in theaters and on digital HD by Dark Sky Films on May 5, 2017.
After encountering terrifying ghosts in their vacation home, modern artist Dan Pappadakis (Steve Zissis, Roadies, Togetherness) and his wife Mary (Jennifer Irwin, The Goldbergs, Halt and Catch Fire) consult a mellow ghost whisperer. Unsatisfied with his groovy verdict–that they should simply co-exist with the “pretty cool” ghosts-Dan goes behind Mary’s back to seek a second opinion, and secretly hires the eccentric Os Bijourn (Mark Proksch, Better Call Saul, Son of Zorn)Os quickly surmises that Dan’s home is full of “demons” and promises to get rid of the beings for a reasonable fee.
As the two spend several evenings trapping ghosts in Os’s increasingly bizarre, “ghost traps,” Dan learns that Os is emotional fragile due to his recent divorce and ongoing attempt to quit smoking. He is so in need of support, that he tries to befriend Dan almost as relentlessly as he tries to destroy “demons.” Due to the increasing awkwardness of the situation, Dan attempts calling the whole thing off, but it quickly becomes apparent that a great evil has embedded itself in his home, and that the fate of his entire family is at stake.
Also starring in ANOTHER EVIL are Dax Flame (21 Jump Street), Steve Little (Eastbound & Down) and Dan Bakkedahl (Life in Pieces, Veep).
ANOTHER EVIL is the feature writing-directing debut of Carson Mell, whose short films have been official selections at Sundance and other leading film festivals. He has written episodes of HBO’s Eastbound & Down and Mike Judge’s series Silicon Valley, and has also published two novels as well as short stories. He is currently working on his own animated television series “Tarantula” at TBS.
The film was produced by Sebastian Pardo & Riel Roch-Decter for the Los Angeles based company MEMORY also behind recent festival favorites MA by Celia Rowlson-Hall, Fraud by Dean Flesicher-Camp and Rat Film by Theo Anthony. MEMORY was named one of Filmmakers Magazine 25 New Faces of Independent Film 2016.
Shane Scott-Travis of Taste of Cinema said, “This eccentric, original and nimble film … wickedly unravels like a mumblecore Ghostbusters.” Cinevue‘s Martyn Conterio wrote, “Nothing else this year can match ANOTHER EVIL for its expert chills, comic dialogue, Office-level cringe and disturbing themes.” Adrian Mack of The Georgia Straight said, “With Ghostbusters gone … here’s 2016’s frankly superior, no-budget depiction of the porous membrane between the worlds of the living and the dead.”
Share