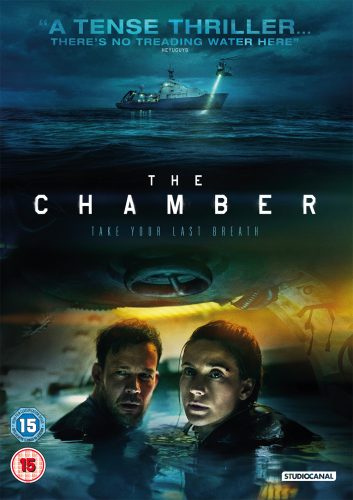 in a fight for survival. Features gripping performances from Johannes Kuhnke (Force Majeure) and Charlotte Salt (The Musketeers), playing the pilot and leader of the crew who find themselves not only fighting for survival, but against each other as the air supply runs out. Plus, a haunting, atmospheric score by James Dean Bradfield of the Manic Street Preachers – in his first work for film – that ramps up the claustrophobic tension in this taut underwater thriller.

The Chamber revolves around a special ops unit, who commandeer a commercial research vessel and its submersible to locate a mysterious item at the bottom of the Yellow Sea. When an explosion causes the sub to overturn and take on water, the crew begins to understand that not all of them will escape, and a fight for survival ensues.

Following his exciting short horror Shifter, this feature length debut marks Ben Parker as a standout British director to watch. The Chamber is a masterfully-constructed exercise in high-stakes tension, with Parker making brilliant use of the film setting’s closed-in, claustrophobic spaces and fight-for- survival concept to make this an intense movie experience.

Leading the action is Johannes Kuhnke, who – after his breakout performance in Force Majeure – continues to shine as a true star-in-the-making. He’s got an incredible support from the other cast members with rising talent Charlotte Salt and James McArdle, and one of Britain’s best character actors in Elliot Levey.

There’s more talent behind the camera too. The Manic Street Preachers’ James Dean Bradfield brings some genuine musical gravitas to The Chamber. His unnerving score helps build the suspense and crank up the tension to near-unbearable levels.

A stunning debut that’s not to be missed!

–  Beneath the Surface of the Chamber Featurette