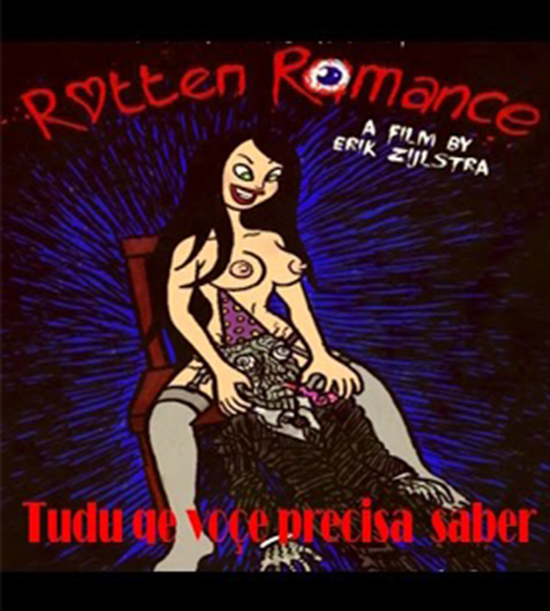 Three segments showing rather unusual love-related stories, each dealing with a dark and twisted love or desire, from cannibalism to self-mutilation.

Coming from the Netherlands, written and directed by self-proclaimed “Mr. Pervert,” Erik Zijlstra, Rotten Romance is not only a short film, but also a three-part anthology. Trying to fit three short films into just under 20 minutes is dangerous, as storytelling will often suffer, but Zijlstra manages the task by trimming every last ounce of fat from each tale. What we’re left with is an anthology of three films that get right to the point, say what they have to say, spill their blood (or guts), and then move on, no wraparound story necessary. Zijlstra is known for making the first hardcore adult film from Friesland (his area of the Netherlands), Friese Amateurtjes (Frisian Amatuers), as well as an arthouse film, Dreamvisitor, so it’s interesting to see the combination of the two genres with a bit of horror added in Rotten Romance.

Split into three chapters, each depicting tales dealing with twisted and deranged love and relationships, Rotten Romance begins with “The Blind Date.” We open with a man looking nervous as he walks up to a house and knocks on the front door. After no answer, he lets himself in, only to find a table set for two and a mask with a note that says “Wear me.” He does, and shortly a masked woman comes from downstairs (the basement, perhaps?) and sets a bowl in front of him. She moves over to him, sits on the table, and spoons food into his mouth. Before he passes out, assumingly from drugged food, she opens a bucket that appears to contain a severed head…and when he wakes up, he is bound to the same table he had been sitting at, a video camera pointed at him, and the woman approaching him. The blind date quickly goes bad for him.

Chapter two is called “Daddy’s Birthday,” and is, in my opinion, the strongest of the three. A tattooed woman wakes up, lights a smoke, and heads outside to see the beautiful sunny day outside her small shack. She heads back in, goes to the bathroom (pointed out for a reason), gets dressed, and begins decorating the place with streamers, as if for a birthday party. Then she sprays a hefty dose of air freshener around the room, and before we can fully question what is going on, she is on top of a party hat-wearing corpse. This section finishes up with equal parts Nekromantik – that we see a girl pee, as we often do in Jorg Buttgereit’s films, is not the only similarity – and Creepshow. Chapter two also happens to feature one of only two lines of spoken dialogue in the entire film. 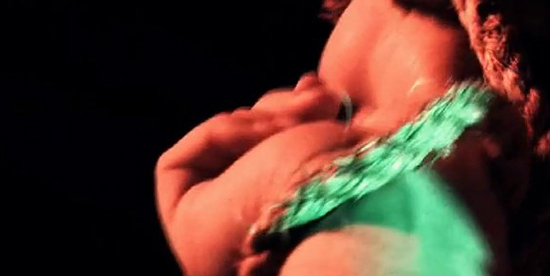 And finally, chapter three, “The Funeral of a Penis.” There isn’t a whole ton to this one, and it seems like it kind of gives itself away pretty much from the start, but it’s still something to experience. We open with a guy in a long blond wig and a skirt. There isn’t narration here, but instead words on the screen, not quite in the style of a silent movie but similar, and we learn about our protagonist. He says he was born in the wrong body, but today he is one step closer to his goal, part of which is getting a singer named Rinus to love him. We then see him walking in a field with a box in his hands, a graduation/wedding-type theme playing, as he finds a shovel and digs a hole. This short film telegraphs what is in the box, if not by title, by what the early narration told us. However, there is a bloody pay-off to tide the gorehounds over.

Erik Zijlstra presents a simple but unique style in his short film anthology. The whole thing is very simple and straightforward while also bordering on the edge of being an art film. Zijlstra’s effects are mostly well done for a low budget film, aside from a very fake looking phallus in the final chapter. The acting works, mostly avoiding dialogue while still telling a story through action and context. Flipping chapter two and chapter three around probably could have made the film end on a stronger note, but overall the whole thing works. Rotten Romance definitely lives up to its title, presenting three short stories about messed up, disturbing relationships. It’s a successful combination of arthouse and gore, one that horror fans and art film fans can no doubt find enjoyment in.