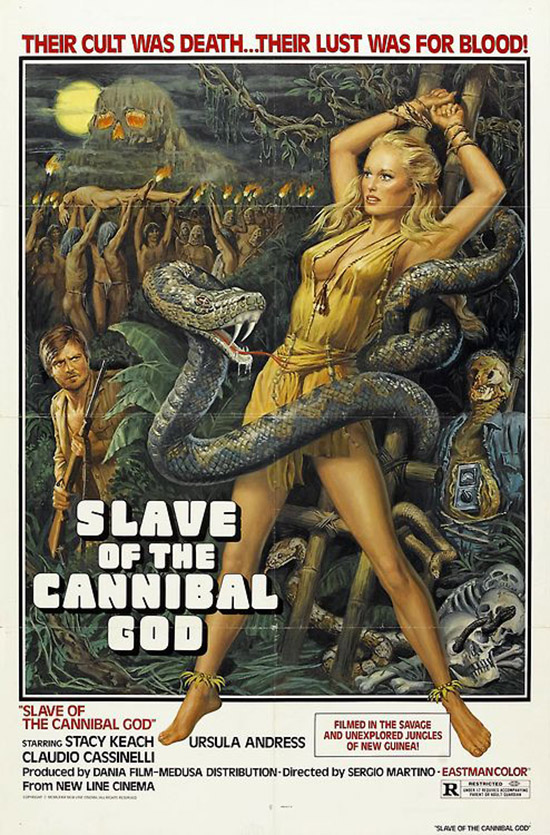 When her husband disappears in the deep dark jungle a woman and her brother hire a team and head there to find him. Unfortunately they run across a cannibalistic tribe once they get there and not everyone survives.

I am just not really into the cannibal movies that were all the rage in the 70’s and early 80’s. Aside from a couple of them they just don’t really do much for me and I think that if you’ve seen one of them then you have pretty much seen them all (with the exception of The Man from Deep River which is an awesome little flick that is probably the best of the bunch if you ask me). I recently watched 1978’s The Mountain of the Cannibal God and can’t say that I was particularly blown away by it as it was just pretty much more of the same and didn’t really offer anything new that I hadn’t already seen countless times before. It is pretty much your standard “a group of people head to the jungle to search for someone only to run afoul of a tribe of cannibals” flick and doesn’t really bring anything new to the table. It isn’t terrible and is at least watchable (well, sort of), but at the same time I have serious doubts that I will ever take the time to watch it again.

As I said the premise is pretty cookie cutter. A woman and several other people head into the jungle to find her missing husband and before you know it members of the team start dying off until just a few remain. Sounds pretty familiar, doesn’t it? That’s because it’s pretty much the exact same thing that happens in Cannibal Holocaust, Cannibal Ferox, and several other similarly-themed movies (though to be fair The Mountain of the Cannibal God did come before the ones that I mentioned).  It’s got the old tired been there, done that, seen it all before feel to it and as I was watching it I successfully predicted pretty  much everything that was going to happen before it happened because I’d already seen it all before. It’s a pretty predictable movie and I couldn’t help but feel a sense of déjà vu as I was watching it. I wish that the people behind it had tried something at least a little different instead of following the same old tired and clichéd formula as it definitely would have helped the movie stand out from all the other movies with the same plot. It definitely suffers from a lack of originality and as such it keeps it from being very memorable for the most part. 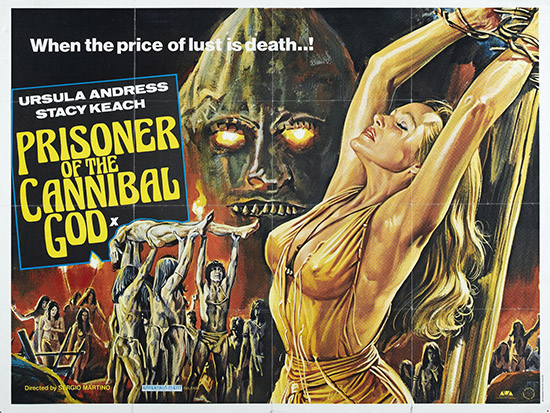 I also didn’t like the fact that the filmmakers felt the need to show real animals actually being killed. As a huge animal person I think that this is just unacceptable and I have a big problem with it. During the course of the movie we see a monkey killed by an anaconda (and it is obvious that the filmmakers threw the poor little monkey to the snake despite the fact that they have denied doing so), an iguana cut to pieces, and several other animals being killed in various ways. I personally don’t want to see this type of stuff and think that it is horrible that several animals had to die for the sake of making a sub-par film.

Most of these scenes are rather graphic and go on a little too long so I spent a lot of time fast-forwarding through them because to be honest they sickened me.  You can make fun of me all you want and say that I’m a wuss, but hurting or killing an animal of any kind for the sake of entertainment is wrong and this is part of the reason that I really didn’t care for this movie.

The only good thing about the film is probably the cast. Ursula Andress is good as the main character Susan and I liked the fact that she actually has an ulterior motive for going to the jungle as opposed to doing so to find her missing husband.  The always cool Stacy Keach (who must have really needed a paycheck) is great as usual as Edward but I sort of got the feeling that he really wasn’t into the role and wanted to be somewhere else. 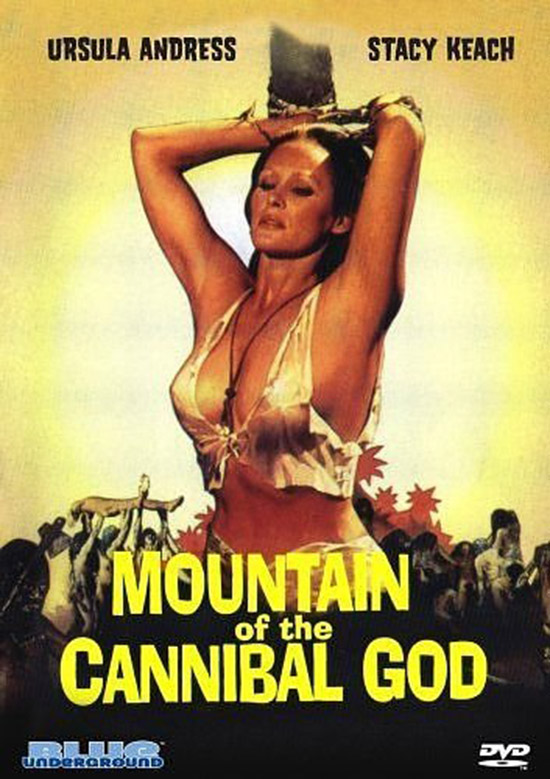 The rest of the cast is decent as well, especially Antonia Marsina as the Susan’s asshole brother Arthur. He does a good job of playing a creep and I couldn’t wait to see him get what was coming to him. I do have to commend the people that were in it because despite the fact they had to know they were making such a lackluster film they did try their best regardless and didn’t just phone in their performances.

I just wasn’t a fan of The Mountain of the Cannibal God. It wasn’t the worst movie I have ever seen but there wasn’t a lot about it that I enjoyed. If you ask me it’s just another forgettable cannibal movie that isn’t anything special. It doesn’t really have a whole lot going for it and unless you are just a hardcore cannibal horror movie fan you probably won’t really enjoy it either. Check it out if it sounds like it might be your thing, but be aware that if you’ve seen any other movie that featured a tribe of cannibals then you have pretty much already seen this film.