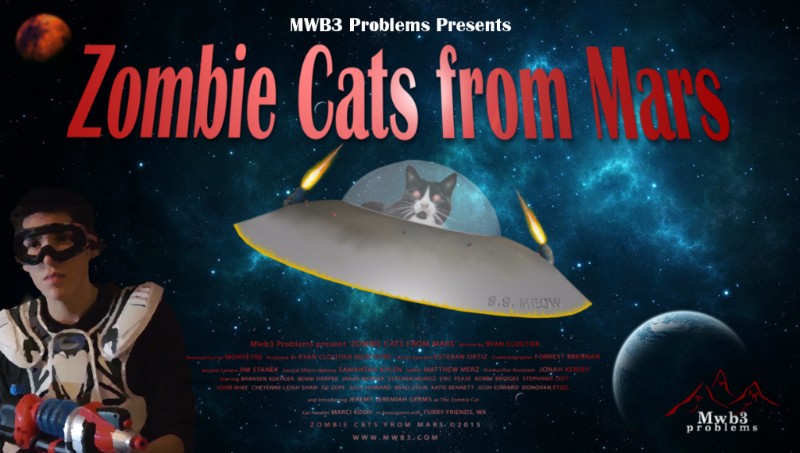 Zombie Cats From Mars Invades Blu-Ray and DVD from Back Aisle Video.

Synopsis:
The story centers on Billy, an effeminate fan of vintage science fiction action thrillers. His only friend is Cameron, a nerdy film buff who tries to boost his confidence whenever he can. After seeing a UFO land, Billy retreats into his head, imagining that aliens are taking over the town. Cameron is skeptical, as is the rest of the town. Meanwhile, people are starting to die. First, the reclusive cat lady, Percis, is discovered mutilated by Lester, the churchgoing husband of Carolyn, Percis’s depressed caretaker. Random deaths soon follow, first a jogger, and then a janitor at the Carbonics Warehouse. A pair of news reporters share this information with the public while the Detective and his Chief try to solve the killings. Meanwhile, the killings continue. Billy, wrapped up in a world of fiction, discovers a story in which Martian Cats land on Earth and inflict horror upon the town. Confident that the killings are the result of the UFO delivering alien cats, he sets off on his own …

The Blu-Ray and DVD will be available on Valentine’s Day exclusively at www.backaislevideo.com and will head to Amazon on February 28th, with a wide VOD release in the Spring.