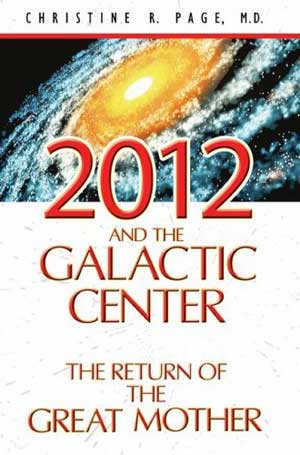 The time for books on the 2012 phenomena are increasing by the day. With each comes a slightly different take and approach to embracing, understanding and contemplating our future that is drawing near by the hour. “2012 and the Galactic Center” is not your usual approach to the issue. Christine R. Page gives us a journey that is more spiritual and esoteric in relationship. As I entered the first chapter I was engulfed into a smattering of new age philosophy. Much was as new as the pages they sat on so I tried to find my place in the chapters that lie ahead that communicated to me.

One mention points to the spiritual self and our ability to embrace, engage or do anything we chose by setting our path and mind on it. In some sense this echoed the thoughts of the “Secret” though its root is of higher thought for most casual readers. We get the sense though that the essence is that life and death are one and in constant flux. Meaning motion and growth. The great mother refers to a godlike position that we all return to. And for clarification this place is compared to voids, heavens, zero point and related. Maybe alot to swallow…so I read ahead.

After plunging thru 3 chapters I realized that this was not the book for me. Though in all fairness I say this because at this point I was feeling like maybe I should back track and read a “new age for dummies” book before taking on something so esoteric. From what I could gather there is some deception in the title. 2012 instantly paints visions of magnetic fields, mayan prophecies and tales of solar flares.

What Ifound instead was book rich in astrology, religion , mythology, new age and a Wiccan base that combined altogether is just too much to jump into. It was hard to differentiate fact from fiction from metaphysical from historical. Things discussed include the cycles of the moon, the perception of perception, the DNA strands and the percentage of unaccounted for strands. Then it moves into astrological perceptions, historical points that link to origins and alot of relationship psychology with the term “great mother” and the oneness of the masses. Even with that said it wasn’t another “secret” book, it wasn’t a mayan 2012 book, it wasn’t a religious book and it wasn’t a science book….so you can see how one could have a hard to finding a base in this material.

To defend the author I will say she is passionate about the work, and knows alot about she is talking about, however how many others share this relationship with the material enough to embrace it? For these reasons I’m simply gonna say its too much to swallow as a passerby.

Perhaps a initiation of primer materials will someday motivate a return to the materiel but for now this isn’t the kind of 2012 book most 2012 enthusiasts will enjoy. Page manages to bring a sense of truth to a notion of Harry Potter meets goliath kind of literary combination. Will this book prove to be important in years to come? Its anyone’s guess ….. I say if inquiring minds must know then draw your own conclusions.