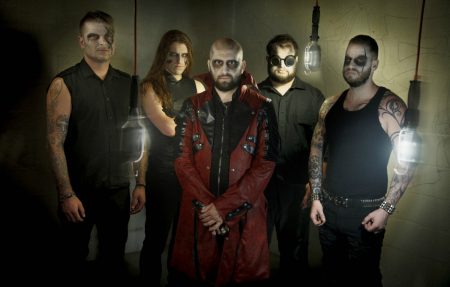 Canadian horror inspired symphonic power metallers MALACODA (named after a demon from Dante’s ‘Divine Comedy’) return with their new six track EP ‘Ritualis Aeterna’ out now as of December 2nd. The EP is the follow up to their well-received 2014 self-titled debut album. Packed with dark atmosphere, originality and innovation, this is gothic power metal for the 21st century with intelligence and intensity to rival that of their infernal inspirations!

“After a long journey filled with equal measures of happiness and misery, large helpings of hope and despair, and a pinch of euphoria and rage…. we can finally say “It’s here!” Enjoy the tracks, and we’ll see you on the road soon…. These six tracks are full of character and are definitely a sign of things to come.”

‘Ritualis Aterna’ is now available digitally on iTunes and on CD at MalacodaMetal.com plus can be heard in full stream at www.malacodametal.com/music.

Plus the band’s new music video inspired by the since canceled Showtime TV show by the same name ‘Penny Dreadful’ can be viewed at www.youtube.com/watch?v=NTJfr292o7g.

The video was directed, produced and edited by The Laundry Design Works. The song explores the themes of the show, each section of the song being a different character’s personal struggles. Just as the show paid homage to horror’s roots, the band’s music video pays respects to classic horror films, using only practical effects to achieve everything from the dark corruption of the blood in the veins of the possessed woman, to the sped up and jerky motions the band members display as the song crescendos.

Taking their name from a demon from Dante’s ‘Divine Comedy’, Malacoda’s dark gothic vision is indeed divine but no laughing matter.

As band leader Lucas, who studied Literature and Religion at University explains: ‘Malacoda was the name of a very minor character in the book, a fallen angel who flies around with a small army of demons torturing helpless souls in Hell. From a literary perspective, I found it interesting that he wasn’t merely an evil creature being tortured for his sins, but was given free reign to do what he pleases and takes it upon himself to torture other wicked souls in the spiritual prison that is Dante’s Inferno. I wanted a powerful name that fit not only the sound of the band but also the lyrical themes I touch upon. I wanted something dark, but not something that would be blatantly devilish sounding. The name translates roughly in Italian to ‘Cruel Tail’ and most people don’t see it and think “this band is named after a demon” and see it as something more romantic sounding.’

Like the ‘Inferno’ that inspired their name they forge metal without limits in sonic shapes endless and horrifying in equal measure. Malacoda’s music vision shares much in common with Dante’s, they are unafraid to gaze into the abyss, unafraid to be inspired by the myriad of human horrors within and without. They are not blind to the worlds within them waiting to be born.

Malacoda are about to follow their well-received self-titled debut with the horror-themed ‘Ritualis Aeterna’, which enters this world on December 2, 2016. Festive it most certainly isn’t, magnificent it certainly is. Full of dark atmosphere, originality and innovation, this is gothic power metal for the 21st century, intelligence and intensity to rival that of their infernal inspirations!