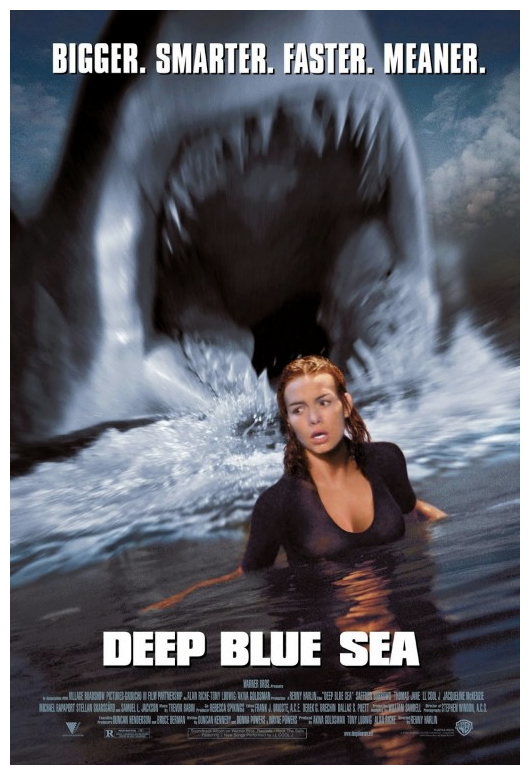 “Aquatica is a research lab located in the ocean. Doctors Susan McAlester and Jim Whitlock are currently doing research to help in the re-activation of dormant human brain cells like those found in Alzheimer’s patients. It seems that sharks do not lose any brain activity as they age, leading Susan and Jim to think that the proteins found in the sharks’ brains may lead to a cure for Alzheimer’s, which is what killed Susan’s father. The research is being funded by a group of investors headed by Russell Franklin, and the investors are getting impatient with the pace of the research. It doesn’t help that a shark got loose from Aquatica and attacked a few teenagers who were on a pleasure romp. In an effort to save her project, Susan gets a forty-eight-hour reprieve from Russell, who goes to the Aquatica to see how his money is being spent. Susan skips a few steps in the research project and genetically re-engineers the DNA of three mako sharks in order to create larger makos so the makos will have larger brains. With only her weekend skeleton crew on board – marine biologist Janice Higgins, engineer Tom Scoggins, shark expert Carter Blake, meteorologist Brenda Kerns, chef Sherman ‘Preacher’ Dudley – Susan prepares for her experiment. The test is successful, but then they all see what Susan’s genetic re-engineering on the sharks has done – one of the sharks wakes up from an anaesthetic and kills Jim. Susan and her crew radio for help, and a rescue helicopter crashes into the station during a tropical storm, and then another shark attack leaves Aquatica sinking into the water. The surviving crew members do whatever they can think of to escape from Aquatica while they’re trying to fight off the three sharks.” (courtesy IMDB)

Seaside resorts worldwide suffered a slump in business in 1975 due to a Universal Studios movie about a man-eating shark and its reign of terror in a small New England beach town. Destined to become a horror classic that would make young novice director Steven Spielberg a household name, Jaws (1975) so thoroughly traumatised an already shark-phobic public, it sent millions scrambling for dry land. Ironically, the real-life object of all the fuss was considerably less impressive than its screen persona. Spielberg’s cinematic star was in fact a temperamental animatronic creation so unconvincing, its presence on screen had to be limited to brief edits. A quarter of a century later audiences were once again confronted by the cold dead eyes of one of nature’s most lethal predators, in the Warner Brothers film Deep Blue Sea (1999). But this time around technology was up to the task of bringing terrifyingly real-looking sharks to the big screen. Deep Blue Sea had been in development at Warners for several years before noted action director Renny Harlin was signed to helm it. 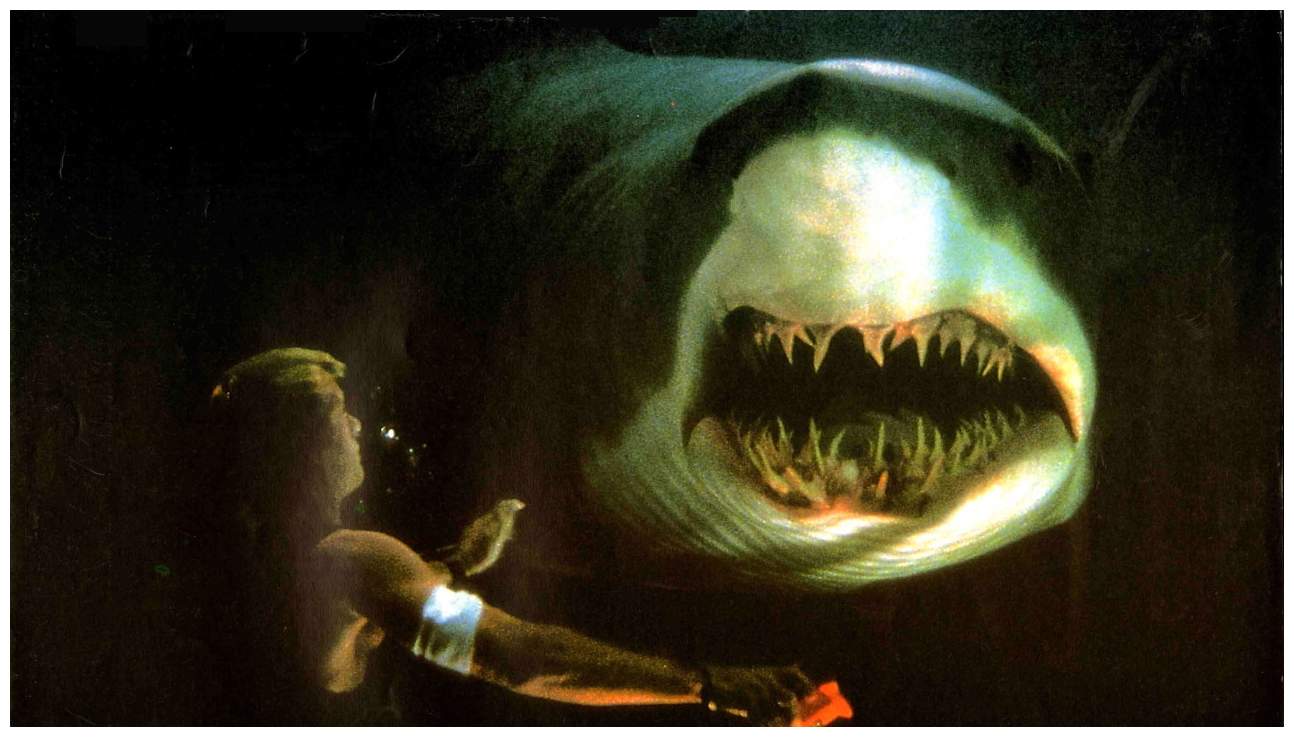 Best known for such high-voltage thrillers as Die Hard 2 Die Harder (1990) and Cliffhanger (1993), Harlin was intrigued by the prospect of venturing into new cinematic territory: “I’ve done big action films but this was more of a horror film than an action film. Although it does have some big-scale action sequences, what we were trying to do was the first large-scale horror movie since The Shining (1980) or The Exorcist (1973) or Jaws (1975). There have been a lot of low-budget horror films with a certain tongue-in-cheek mentality but, with all due respect to those films which have been very successful, we wanted to make a seriously scary horror film with believable characters and situations so that the audiences could be scared in a big way. I felt that was a different kind of challenge for me.” In the script by Wayne Powers and Donna Powers – reworked from an original screenplay by Australian Duncan Kennedy – the villains of Deep Blue Sea are genetically engineered super-sharks, bigger and far more aggressive than their naturally-spawned counterparts and uncannily intelligent. 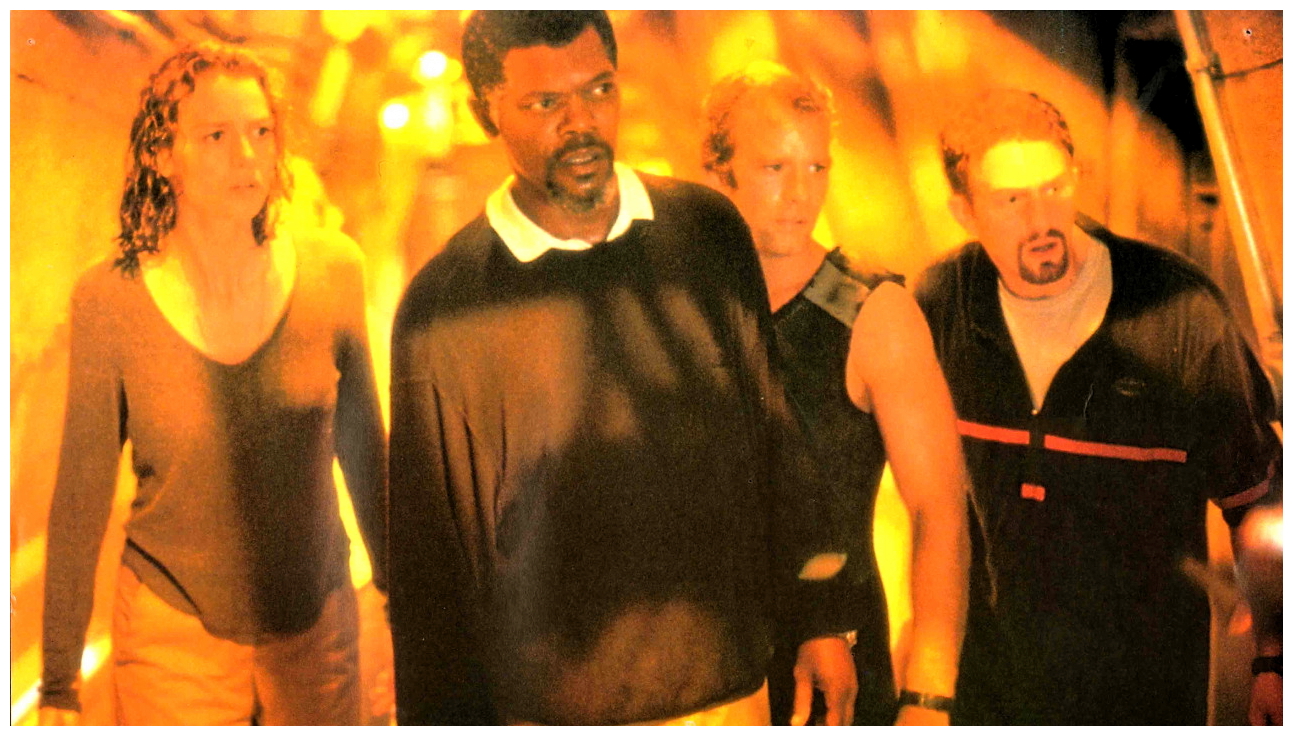 Their fifty-million-year evolutionary leap is the result of experimentation on board the Aquatica, a former submarine refuelling station retrofitted for oceanographic research. Scientists Susan McAlester (Saffron Burrows) and Jim Whitlock (Stellan Skarsgård) have been conducting highly unorthodox (not to mention downright unethical) experiments on three genetically enhanced mako sharks, hoping to increase the size of their brains and facilitate the extraction of a rare protein complex that they believe will result in a cure for Alzheimer’s Disease and other ravages of human aging. After one of the sharks escapes and attacks a boatload of teenagers, Aquatica’s corporate accountant Russell Franklin (Samuel L. Jackson) is sent in to investigate. To prove that their research is working, the scientists remove fluid from the brain tissue of the largest shark. While examining it, Whitlock is attacked by the shark and his arm is bitten off. 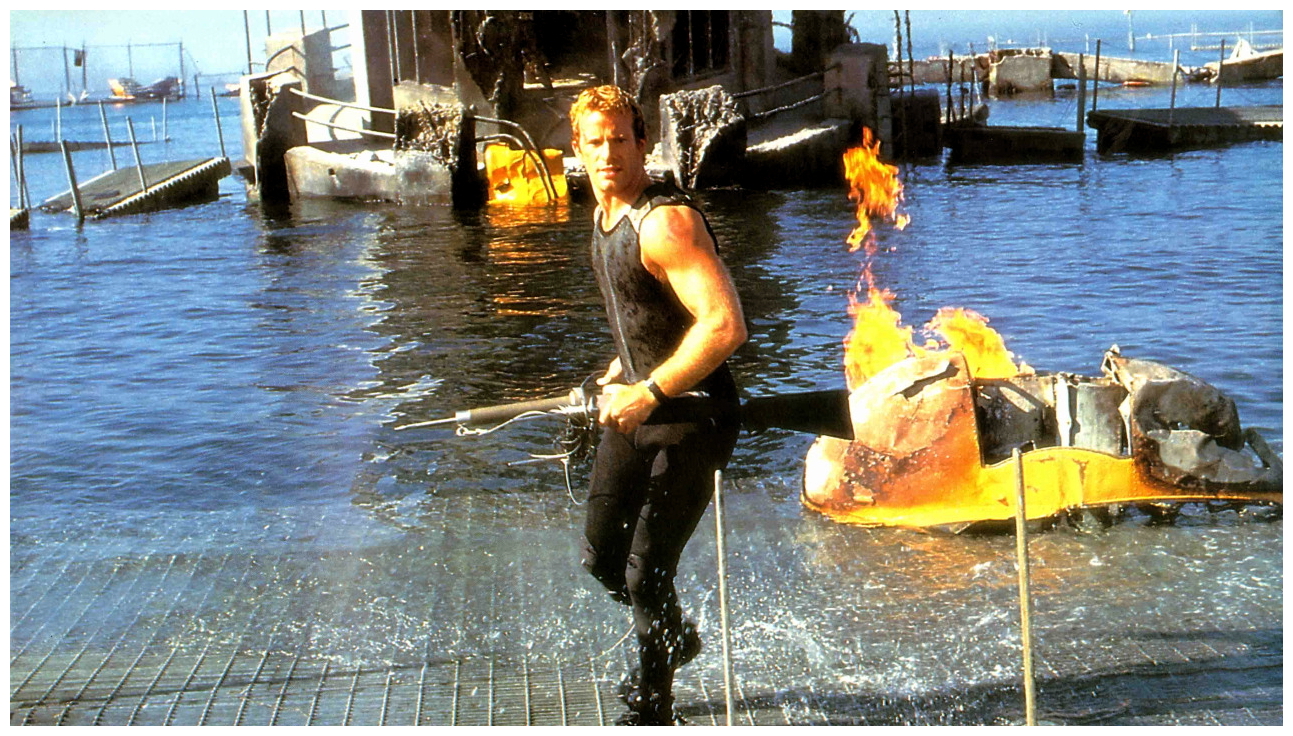 Control tower operator Brenda Kerns (Aida Turturro) calls for a helicopter to evacuate Whitlock but, as he’s being lifted in a gurney, the cable jams and he falls into the shark pen. The shark grabs the gurney and pulls the helicopter into the tower, blowing up Kerns and the pilots. In the ensuing chaos, the shark uses Whitlock’s gurney as a battering ram to smash an underwater window, flooding the facility, freeing the other sharks and gaining control of the rapidly sinking sea lab. The remaining survivors make their way to the surface and Franklin, while making a dramatic speech about group unity, is snatched and dragged into the water by one of the sharks. We eventually meet up with the Aquatica’s head chef Sherman ‘Preacher’ Dudley (LL Cool J), who is attacked by one of the sharks but defeats it by throwing a cigarette lighter into the kitchen’s gas oven. Stalking their human prey with cunning, the two remaining ocean predators begin a cat-and-mouse game aimed at winning their freedom and exacting a deadly revenge. 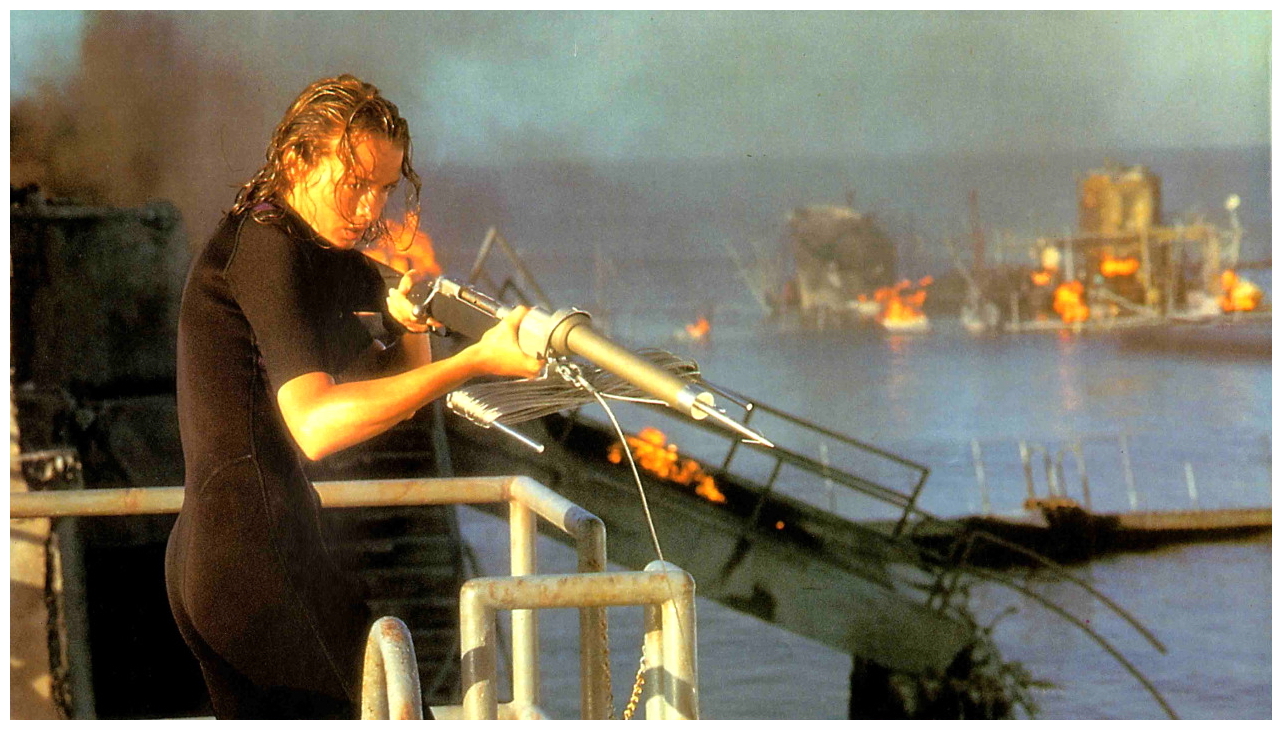 I enjoy a good old Mad Scientist movie, don’t you? Their mono-maniacal view of the world, the handicapped assistants, the snappy retorts, tampering in God’s domain, etc. The Mad Scientist is a staple of the genre and, sadly, he doesn’t come around much any more except in anaemic, fairly pointless exercises. Deep Blue Sea features that rarity, the Female Mad Scientist. Why so rare? This is a question I’ve asked myself again and again. Against all expectations, there simply aren’t a whole lot of movies featuring Female Mad Scientists, at least not Mad in the classically accepted hand-wringing, “I’ll show you, I’ll show them all!” sense of the word. Some flexibility may be required when defining Female Mad Scientists. A few thousand years of cultural pressure informs us that women are to be protected, and that they are more sensitive and in-tune to life and nature’s patterns and vibrations. 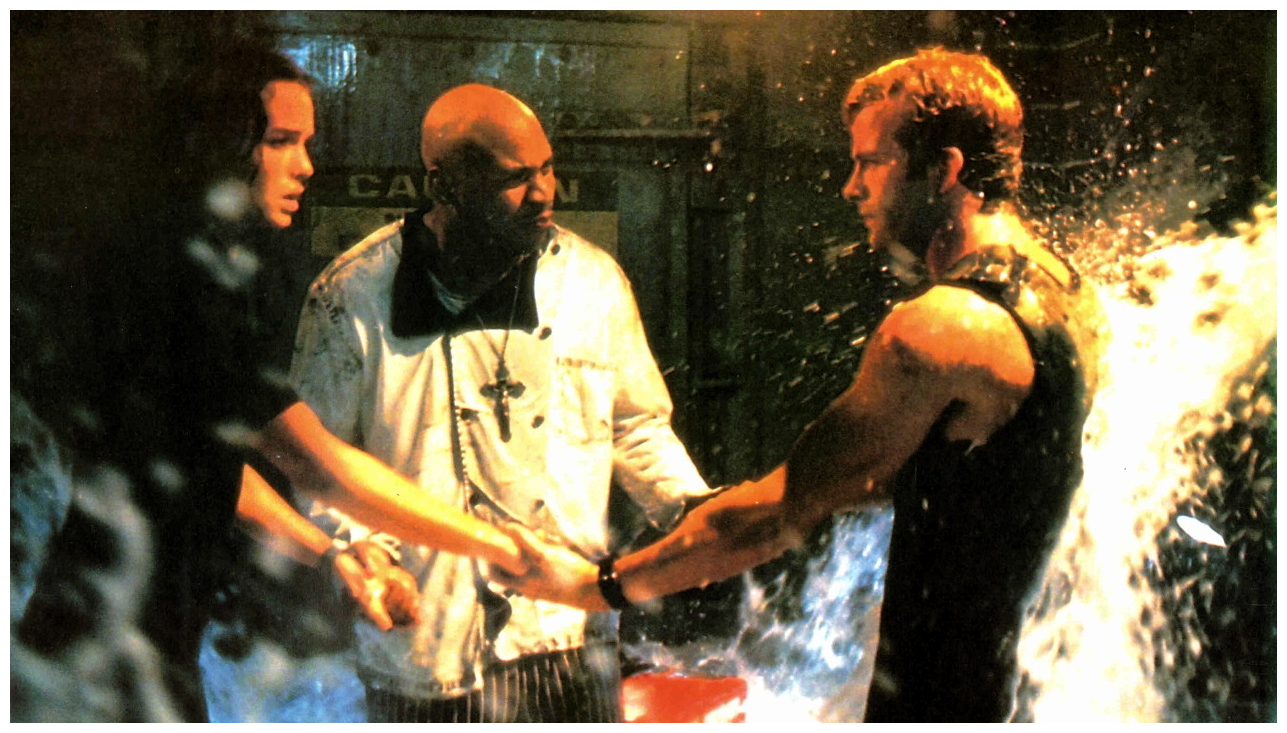 Overcoming these stereotypes requires some actual effort on the part of the screenwriter, so it’s the uncommon filmmaker, or the canny one searching for a marketable hook, who will breach the staid walls of tradition and give us a tale of a woman messing about with the natural order of things. But I digress – Saffron Burrows earns her pay as the Mad Scientist in Deep Blue Sea, and she’s ready to strip down to her underwear if the situation calls for it. Character actor Ronny Cox, with more than a hundred credits from Deliverance (1975) and The Car (1977) to RoboCop (1987) and Total Recall (1990), is seen briefly but not heard as the CEO of Aquatica, which is why he doesn’t even get a credit, and the rest of the cast do okay with what they’ve been given. Ex-rapper LL Cool J actually improves upon what could have been a very clichéd character (man-struggling-with-faith-facing-death) and injects the role with a little humanity and humour. 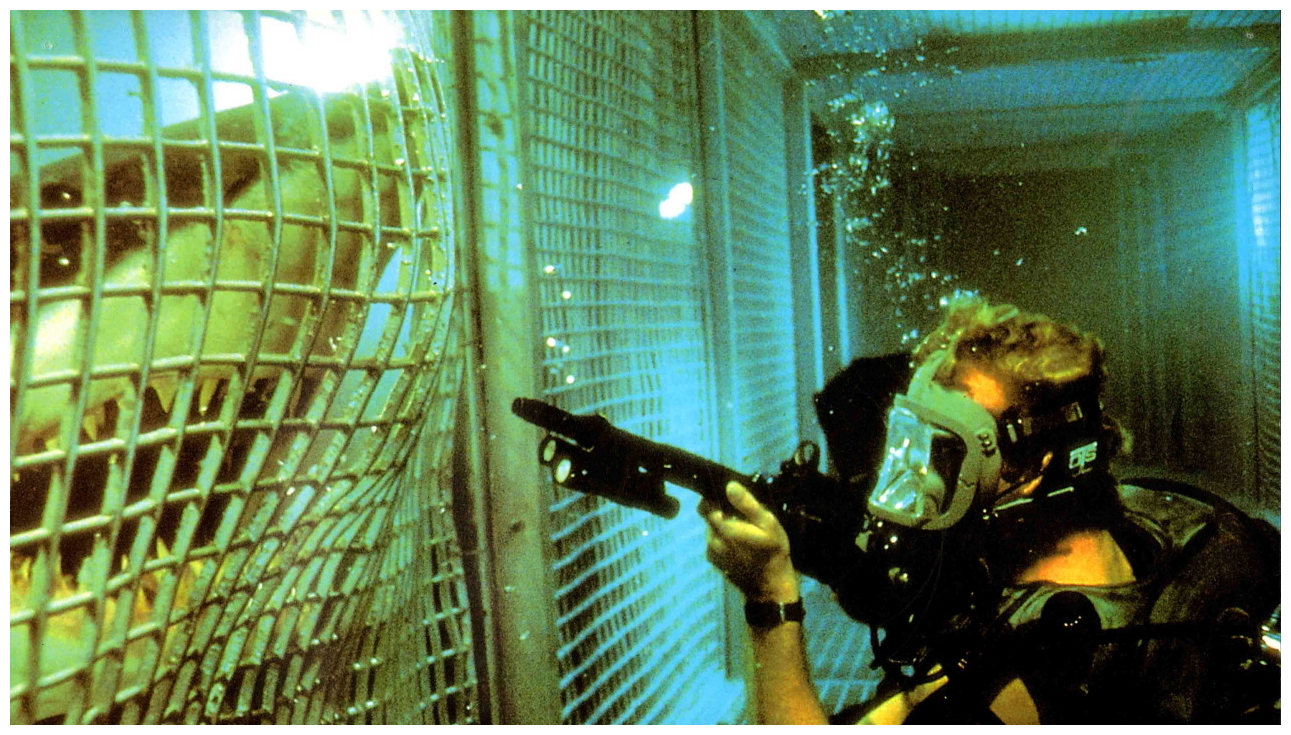 He also performs the end credits song Deepest Bluest aka Shark’s Fin, but it’s not as if anyone will be watching Deep Blue Sea for the performances – the sharks are the stars, and everyone involved with the movie knows it. A big, loud action movie that doesn’t try to pretend to be anything else, short on logic, the dialogue is dumb, the science is dubious, the actors don’t seem to be trying terribly hard yet, despite all that, it still manages to be entertaining. If you don’t believe me, just ask Roger Ebert (“In a genre where a lot of movies are retreads of the predictable, Deep Blue Sea keeps you guessing.”) or Stephen King (“My first trip after being smacked by a van and almost killed was to the movies, Deep Blue Sea, as a matter of fact. I went in my wheelchair and loved every minute of it!”) or Empire Magazine (“It was never going to crash any parties come Oscar night or usurp previous nature-fights-back epics, but Deep Blue Sea remains defiant. It’s about giant sharks eating people, and that’s exactly what you get.”). 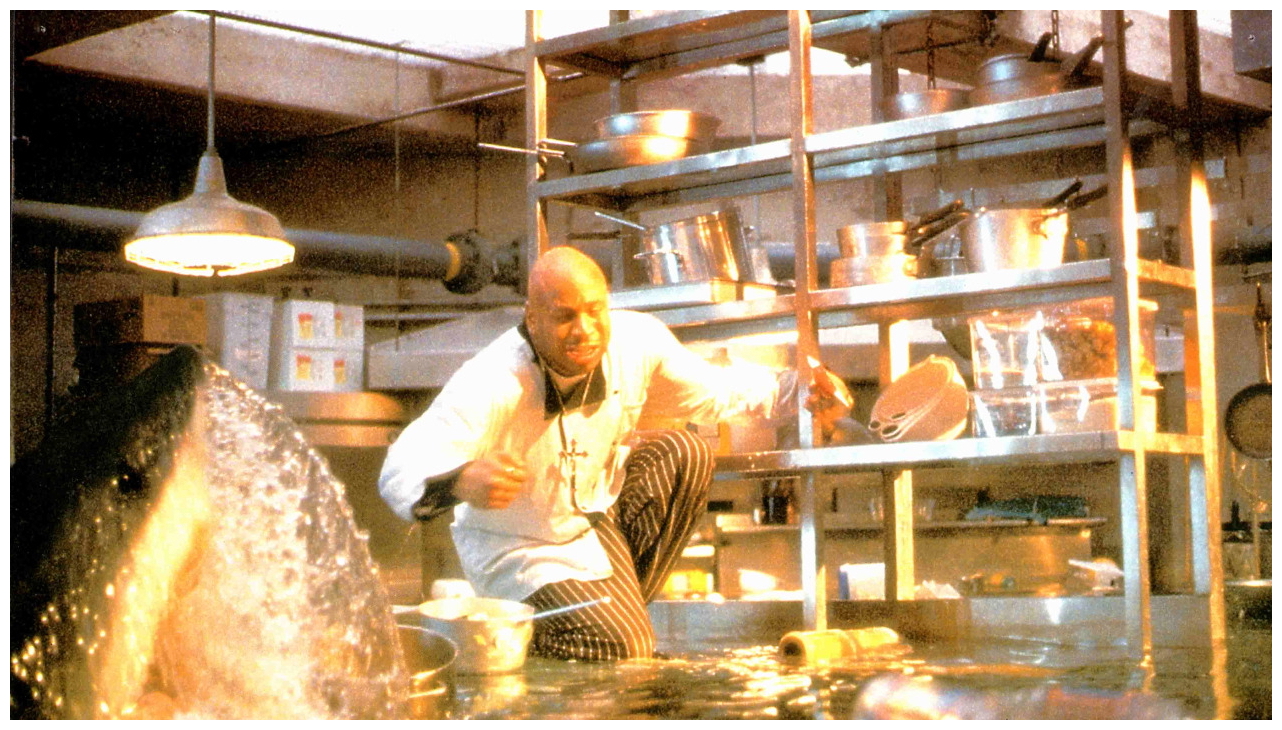 It’s no classic by any stretch of the imagination, but Deep Blue Sea delivers in its own modest way. If you can’t get enough movies about stupid people and the sharks that eat them, this film is for you. There are some good jolts and action sequences but don’t expect anything particularly fresh. For instance, the three sharks are killed in the same way as the three sharks in Jaws (1975), Jaws 2 (1978) and Jaws 3-D (1983) – explosion, electrocution, incineration – and a car number plate pulled from one shark is identical to the number plate seen in Jaws. Furthermore, according to Harlin himself, the abrupt death of company man Franklin early in the film was directly inspired by the untimely passing of Captain Dallas in Alien (1979). Having demonstrated to you the unrelenting duplication to be witnessed while probing the dark depths of Hollywood, I’ll vanish into the night, but not before inviting you to rendezvous with me at the same time next week when I’ll discuss another dubious treasure for…Horror News! Toodles! 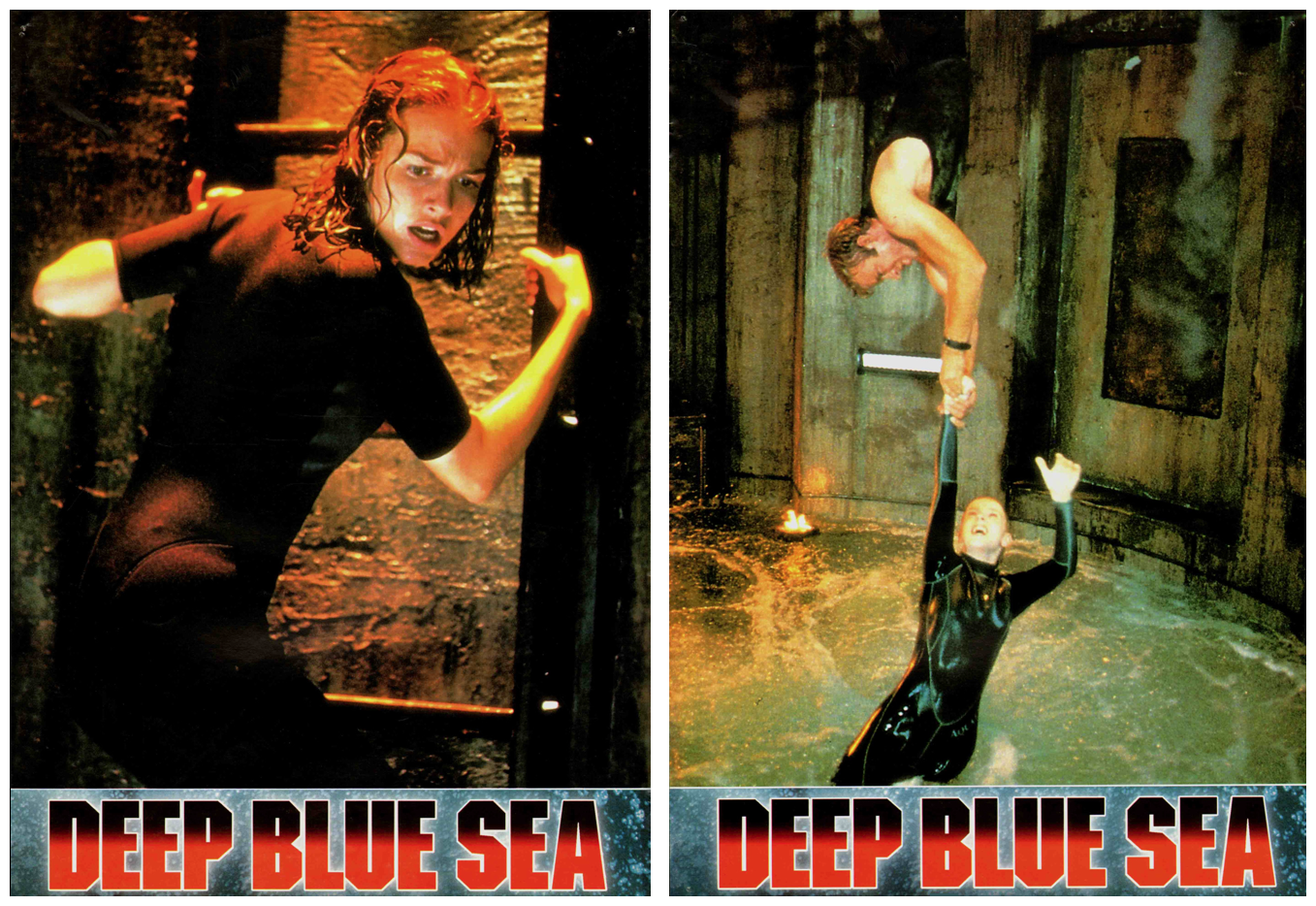