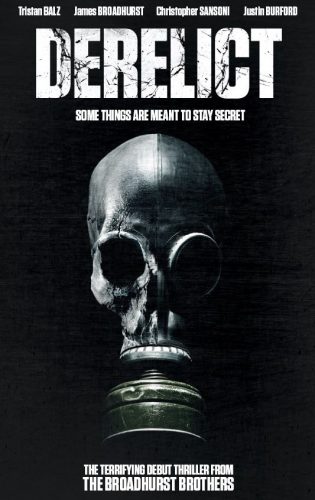 A journey into terror. That’s the promise of Derelict, the feature film debut of brothers Cris and James Broadhurst. The official trailer for Derelict, which was shot in Perth, Western Australia and stars Justin Burford (Foreshadow), has just been released.

The film tells the story of three urban explorers who venture into an abandoned industrial complex which contains a deadly secret.

Their excursion turns into a fight for survival when they are trapped and hunted by a malevolent figure. To survive the night the three men must put aside the growing tension between them to find a way out. Cris and James have worked in the local industry for the past decade and had made several short films prior to Derelict.

There was no question that they would choose to do a horror for their first full length film. “We love the genre and I think we watched every horror on the shelves at our local video shop back in the VHS days,” said Cris. “What really inspired us are the independent horror films of the 1970s which have a raw and gritty quality about them. “That’s the tone we wanted to re-create with Derelict.” The result is a classic horror story that will satisfy fans of the genre while providing new twists on a familiar set-up.

“We wanted to do something different from the ‘woman in peril’ scenario which is so prevalent in a lot of films in the genre,” Cris said.

“It’s the dynamic between the three main characters that really interested us, their conflicting motivations and different reactions to what is a very intense situation. “And of course it’s fun to see which of them make it out alive and which of them don’t. “We set out to make a film that we would want to see ourselves and hopefully others will enjoy it as well.”