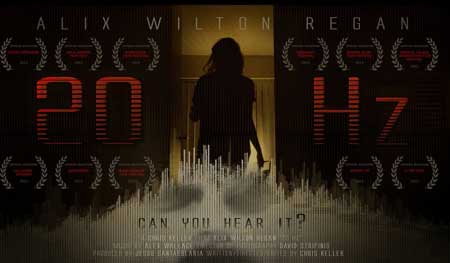 Human hearing is capable of detecting sound waves between 20 and 20.000 Hz. … merely a small fraction of the frequency spectrum. Most sounds around us go unnoticed.

Our story focuses on a young musician (Alix Wilton Regan) recording a demo tape on a dark and stormy night. But there’s some sort of interference being picked up by her Digital Audio Recorder and it’s very distracting. So she goes in search of what is causing the problem.

This is a straight forward tale of things that go bump in the night. Not special effect heavy in any way, but the sound engineer and composer, Alex Wallace, really takes the lead role in this film.

Mr. Keller is an established visual effects artist, whose work you will have seen in AVENGERS:AGE OF ULTRON, CAPTAIN AMERICA:THE FIRST AVENGER, MAN OF STEEL and other major releases. As a writer and director, he has three other short films in addition to this one.

Ms. Regan has had an extensive career so far as a voice talent, appearing in several video games and cartoons. She has also appeared in a few live action shorts and features. So you may recognize her…you may not.

This film is, as I said, straight forward and scary in the classic sense. Good stuff.

So using my special short scale of one to five, five being awesome, I’m giving this film 4 soundcards.