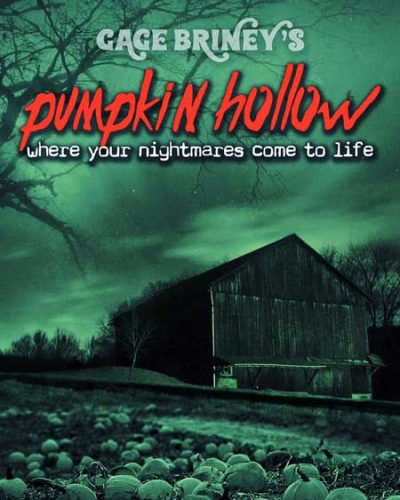 He’s captivated YouTube with his horror fan films, web-series “Melody Heights” and original short film Floaters, and now 20-year-old Gage Briney is in pre-production of his debut feature film Pumpkin Hollow.  In a move that will ripen the interest in horror fans, Briney, an Arkansas native, will focus primarily on his original, intricate story and its use of special effects over the common place tactics of jump scares and CGI gore. With production slated to begin in November, Gage formally welcomes you to Pumpkin Hollow. Pick your friends wisely.

Pumpkin Hollow will see five college students traveling from New York to Arkansas as Gavin prepares to introduce his girlfriend, Blair, to his parents for the first time. Gavin hasn’t seen his parents in three years and upon reuniting with his relatives he discovers that they are now the proud owners of a huge pumpkin patch and scream park called Pumpkin Hollow. The reunion is also met with the murder of two teenagers, resulting in the hollow’s sudden closure by state officials. Undeterred, the group of friends head into the attraction and are alarmed to discover that the attractions – werewolves, killer clowns, doll-faced killers, backwoods hillbillies, etc – come to life. This isn’t the only secret hidden in the catacombs covered in orange gourds and now the college kids must try to survive creepy re-animated killers… and each other.

A GoFundMe campaign will be launched in support of Pumpkin Hollow soon. Until then, please follow this upcoming title on Facebook: www.facebook.com/PumpkinHollowTheMovie/.