EVIL DEAD IN CONCERT – A Halloween Experience in DTLA 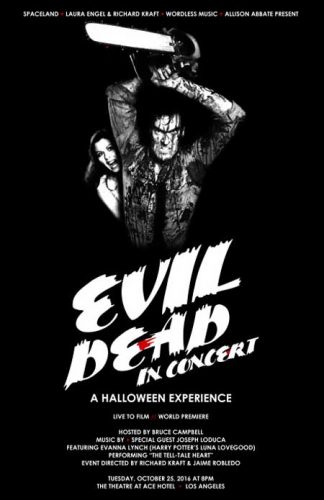 On Tuesday, October 25, the Gothic 1920’s movie palace The Theatre at Ace Hotel will be transformed to celebrate Halloween with the World Premiere of  THE EVIL DEAD IN CONCERT / LIVE TO FILM: A HALLOWEEN THEATRICAL EXPERIENCE.
This event, hosted by Evil Dead star Bruce Campbell, will include LA’s wild Up chamber orchestra performing a re-imagined score of Sam Raimi’s classic horror film live to picture. This score is written by the film’s original composer Joseph LoDuca, who will also be a featured artist. Opening the show will be Harry Potter’s Luna Lovegood, Evanna Lynch, and violinist Lili Haydn, performing the World Premiere of Joseph LoDuca’s The Tell-Tale Heart: A Duet In Terror based on Edgar Allan Poe’s horror classic.
Legend has it that The Theatre at Ace Hotel is haunted by the spectral remains of singers and musicians from jazz’s Golden Age. These phantasmagorical artists will be acting as a Greek chorus throughout the evening.
Co-directing the event are Award-winning Jaime Robledo and Richard Kraft who was recently the creative director on the highly acclaimed Disney’s The Little Mermaid In Concert at The Hollywood Bowl starring Sara Bareilles and Rebel Wilson. The show is being produced by Wordless Music, Laura Engel & Richard Kraft, Spaceland and Allison Abbate.
The Evil Dead has developed an expansive cult following and has been cited among the greatest horror films of all time, notably gaining support from horror author Stephen King and leading to sequels, as well as accompanying video games, comic books and a television series.
Tickets are available over at: www.acehotel.com/calendar/losangeles/evil-dead-concert-live-film
Share

Tags THE EVIL DEAD IN CONCERT