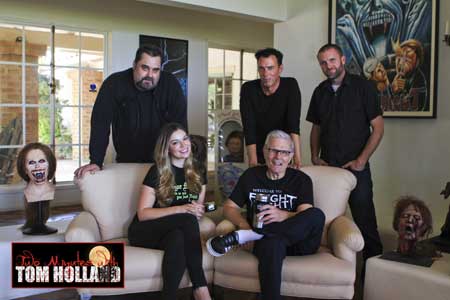 Weekly Documentary Series with Master of Horror Looks to Fans

Los Angeles-based executive producer Jack Ulrich is proud to announce the launch of a GoFundMe Campaign for “Two Minutes with Tom Holland,” a twenty-two episode weekly documentary series which will feature writer, actor and director Tom Holland, the creator of the horror classics Child’s Play, Fright Night and Psycho II.

“The goal of the documentary,” said Ulrich, “is to delve behind the scenes of Mr. Holland’s films, and to shine a light on his often times entertaining and occasionally bizarre journey from starry eyed actor to a genuine ‘Master of Horror’.”

“If you’d like to hear never before told stories from Fright Night, Psycho II and many more, from Tom himself,” said Baker, “please visit our GoFundMe page and get involved. We’ve got some incredibly cool perks for our contributors, as this series will be for the fans and by the fans. Let’s keep horror alive!”

Offered Holland, “I’d like to take a moment to thank the horror fans out there for their years of love and support of my work, and I look forward to many more years of scaring the hell out of you, and of telling you a little bit of how I did it, in Two Minutes with Tom Holland.”