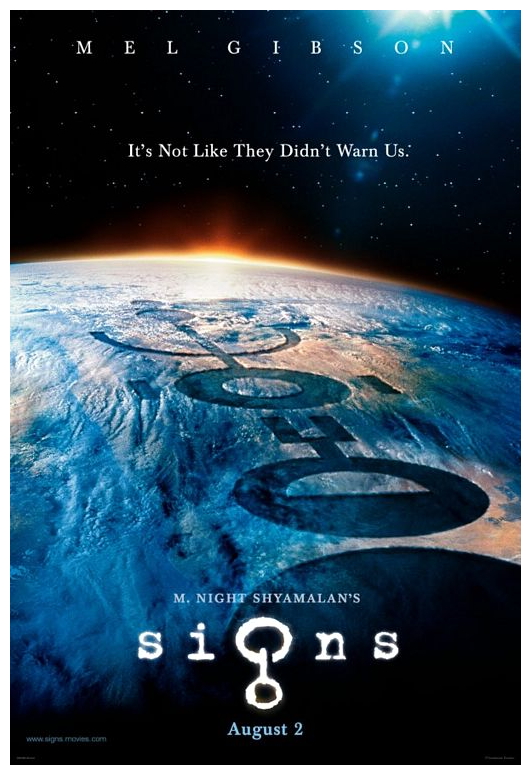 SYNOPSIS:
“Following the death of his wife, former man-of-the-cloth Graham Hess lives on a farm with his two young children and his younger brother. One morning, huge crop circles appear around the world, and a five hundred foot one shows up right outside the Hess house. Is it a prank, or a sign of an alien invasion? Cue Hess embarking on a voyage of discovery.”

REVIEW:
As if you couldn’t tell from the plastering of his name all over the marketing, writer-producer-director M. Night Shyamalan‘s brooding low-key style – which entranced film-goers with The Sixth Sense (1999) but had them running for the exits during Unbreakable (2000) – is heavily present throughout his claustrophobic and expertly orchestrated science fiction thriller Signs (2002). Australia’s own Mel Gibson is in terrific form as Graham Hess, the widowed father of young Morgan (Rory Culkin) and Bo (Abigail Breslin), and older brother to Merrill (Joaquin Phoenix). Hess is a simple farmer who discovers there might just be something more to the remarkable topiary that appears one morning in his crops. While the deliberate pacing doesn’t always pay off, we have expert performances from a professional cast, excluding Shyamalan himself, who makes a short but obviously uncomfortable appearance as Ray Reddy, responsible for much of the Hess family’s angst. We also encounter an unexpected sense of humour as well as the director’s customary expert use of sound make this teasing tale of faith lost and found an interesting (if not altogether satisfying) curiosity. 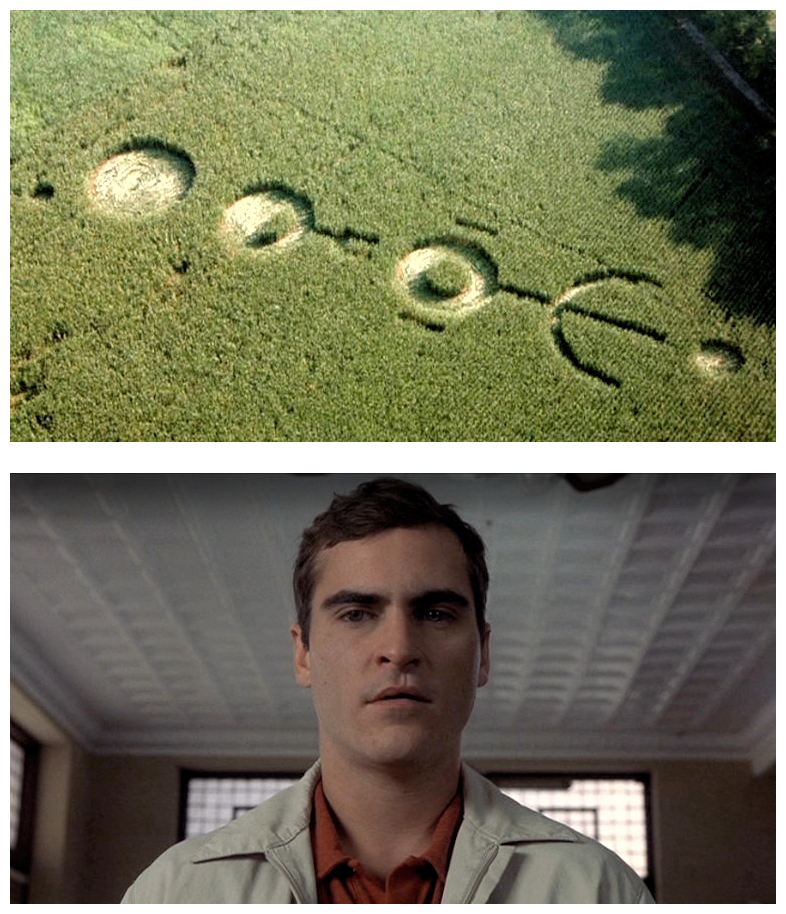 Science fiction fans who were expecting the spectacle of Close Encounters Of The Third Kind (1977) or the visceral thrills of Independence Day (1996) were possibly the most disappointed, as Shyamalan keeps the locations, characters and special effects to a bare minimum. It’s almost as if the script was originally conceived as a stage play, or a Dogma ’95 submission, but Shyamalan insists otherwise: “Initially it was like a big family thing with so many characters, a big Thanksgiving and then the end of the world comes. I started doing that but it felt like The Towering Inferno (1975) – the screaming aunt was over there, and then you’d have the hero, like ‘Quiet down everyone’. It didn’t feel right. I couldn’t get to know the characters enough so I just kept whittling down from seven to six to five. I had one more character in the house, she was like a nanny/teacher character and I was going to cast Toni Collette, but then I lost her.” 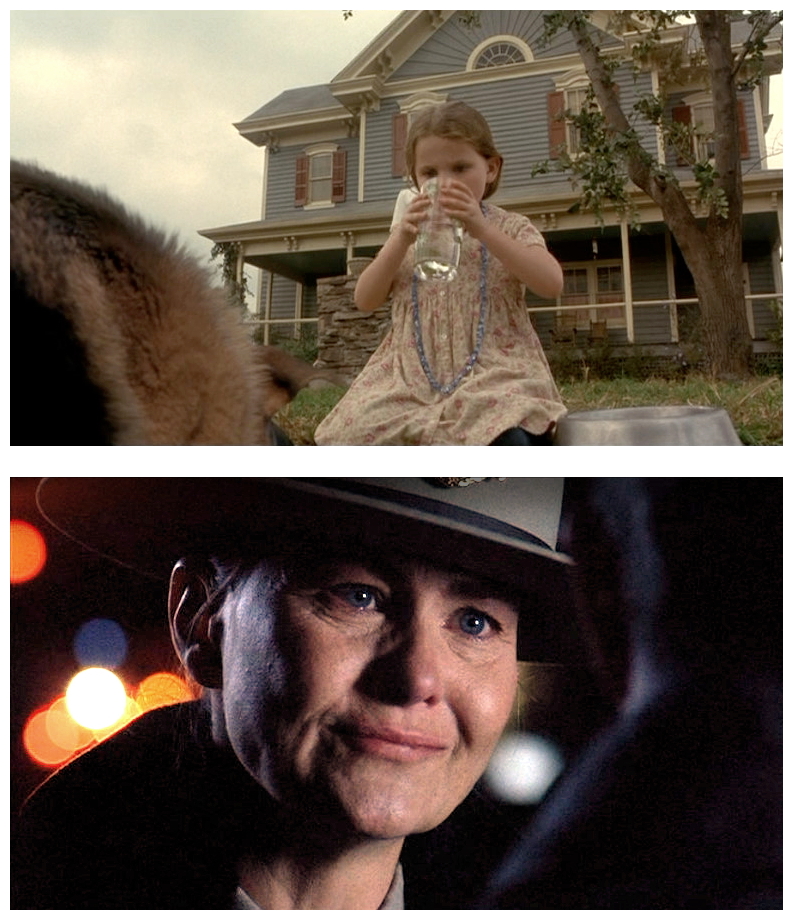 There were other casting casualties along the way. Graham Hess was originally written as an older character. Paul Newman was offered the role but turned it down, as did Clint Eastwood. Johnny Depp and Mark Ruffalo were both approached for the role brother Merrill before being replaced by Phoenix (Ruffalo had to pull out of the film due to a brain tumour which was later found to be benign). But this restraint and careful building of shadowy menace are undoubtedly his forte. The second half of the film changes gears to become reminiscent (well, it reminded me) of the classic Twilight Zone story The Invaders, in which Agnes Moorehead spends a terror-filled night in her lonely farmhouse attempting to elude a number of alien spacemen. By this time Shyamalan’s work had become strongly linked with major plot twists and, to an extent, Signs participates in this game-playing with audience expectations. 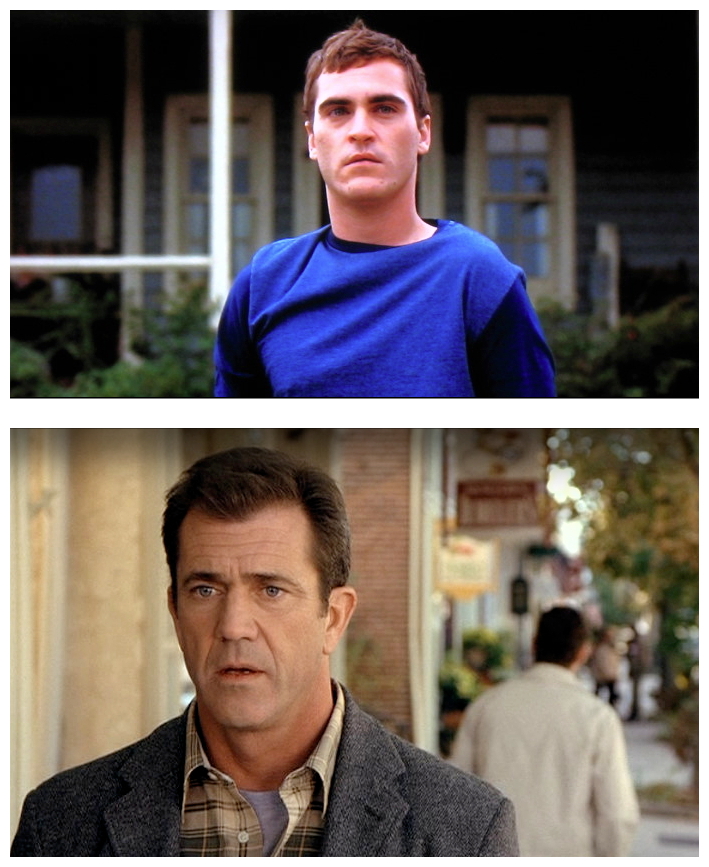 This time around, however, Shyamalan didn’t just offer up a surprise ending but also toyed with the limits and frameworks of genre, delivering an alien invasion tale in which very few aliens are ever seen, and the invasion itself occurs pretty much off-screen. The aliens were originally scripted as having feminine builds and movements, thus the movements of tall, thin, female actors were used as models for CGI tests and some shots. However, it was decided that female bodies did not convey a threatening enough posture for the creatures, and a male CGI stand-in ended up being used in the final scene as well as on the rooftop. The script originally called for the aliens to have a camouflaging ability much like the one portrayed by the alien in Predator (1987). However, when Shyamalan saw the test shots of the creatures produced by Industrial Light & Magic, he decided that it was too effects-heavy and dropped the concept entirely. 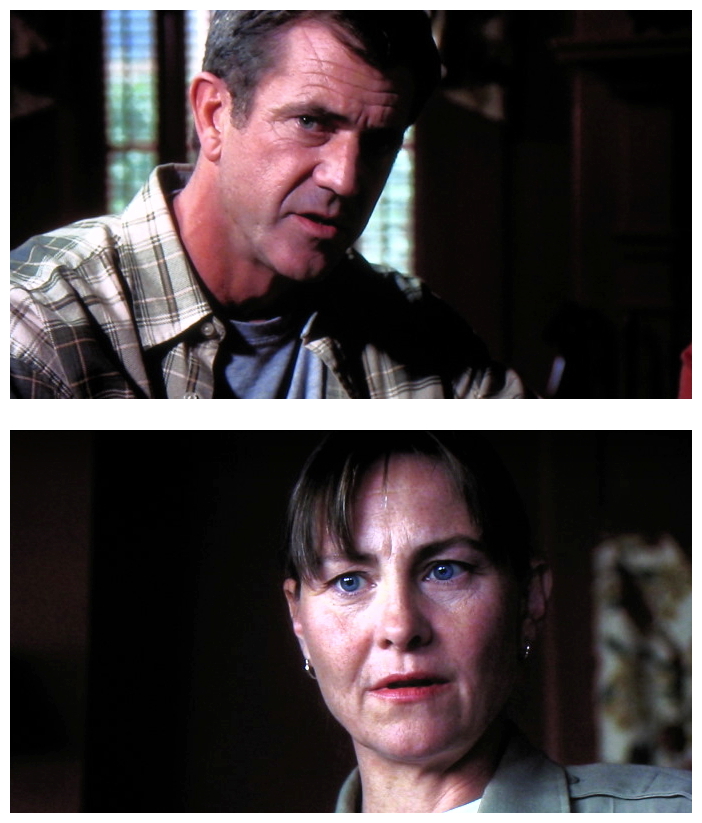 Instead of large-scale visions of cities being destroyed, Shyamalan focuses on one family and a microcosm of small-town rural lives. The titular signs are not just the mysterious crop circles that appear around the world to announce the arrival of demonic extraterrestrials – they are also the signs of faith and divine intervention as interpreted by Hess, who happens to be a retired priest. As such, Signs audaciously reworks the conventions of the alien invasion story by filtering these through an existential (and theological) lens. The film’s relative departure from blockbuster norms may have irritated some moviegoers hoping for a more conventional genre film but, by working to produce a sense of awe and wonder at signs of transcendence, it is definitely science fiction, at least in terms of basic themes. In form and content, however, Signs owes much more to Alfred Hitchcock, Nigel Kneale, George Romero and Steven Spielberg. Speaking of which, Spielberg’s favourite producer Frank Marshall acted as co-producer on Signs: 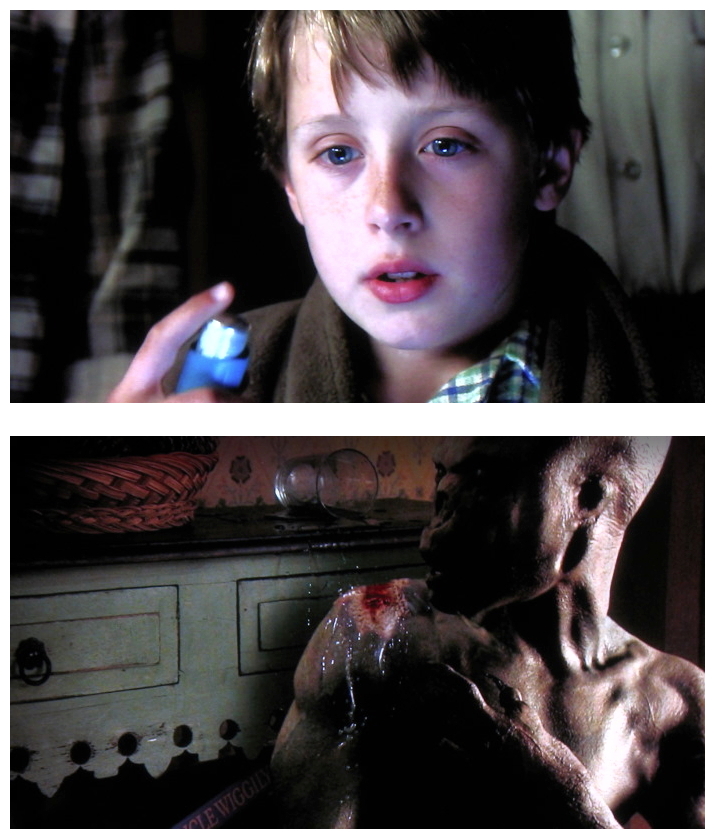 “I find what’s interesting about the stories Night writes is that he takes these B-movie ideas – ghosts in The Sixth Sense, comic book heroes in Unbreakable, and aliens in Signs – and kind of turns them upside down by crossing genres. I wouldn’t call Signs a science fiction movie, it’s about so many other themes and layers. Night ran Hitchcock’s The Birds (1963) for the crew just to give us an idea of the tone he was after and, if you look at The Birds, it’s called The Birds, but it’s not about birds. That’s kind of what he’s saying to us.” The rural setting gives the film a timeless feel, and its narrative imaginatively seeks to explain profound coincidences, not as the work of a writer looking for a radical new twist, but rather as markers of divine potency and planning. Ultimately, Signs stands as an impressively ambitious auteur project within mainstream blockbuster parameters. It may yet prove to be Shyamalan’s genuine masterpiece. Before you have time to digest that crummy nugget of knowledge from a very special source, I’ll quickly say my goodbyes and disappear into the night, but not before inviting you to return next week to sacrifice another ninety minutes of your precious life to witness dark depravities never before realised (well, almost never) with…Horror News! Toodles! 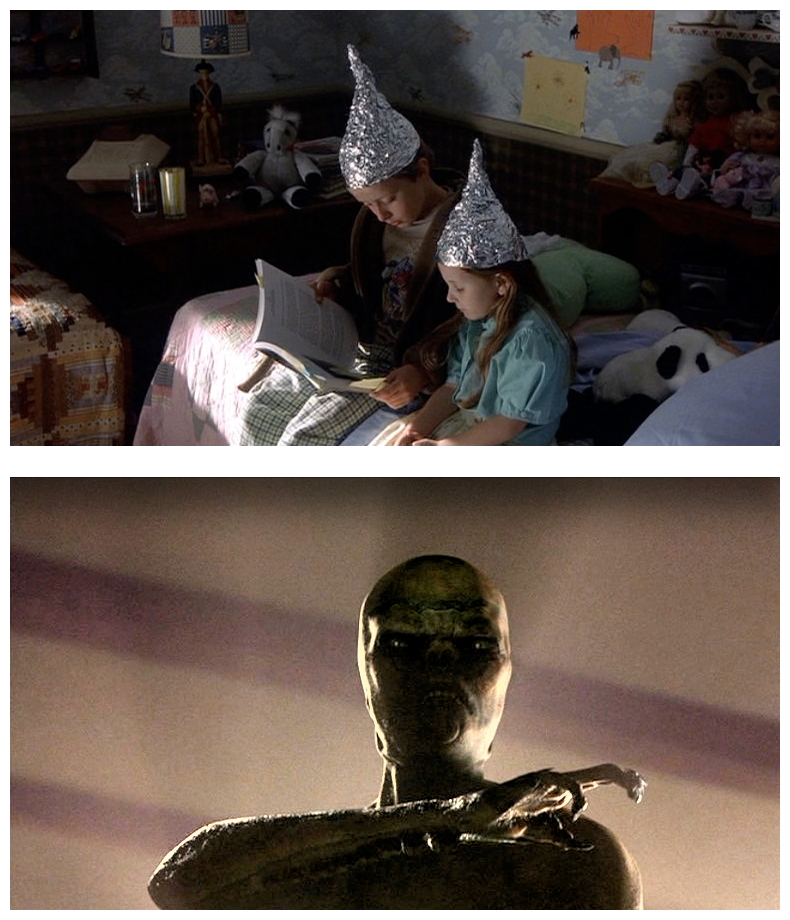