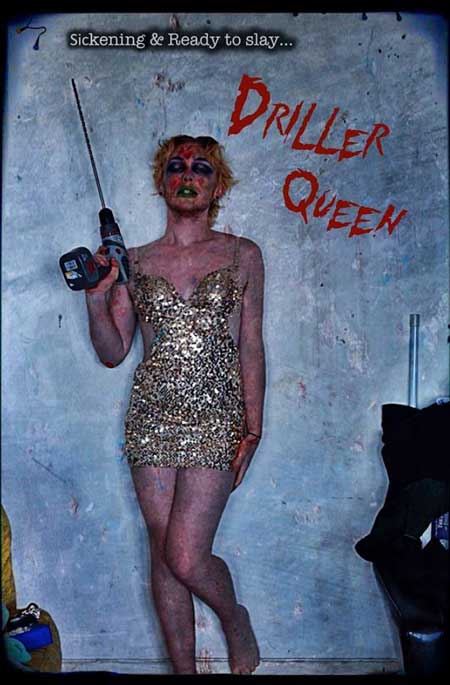 From experimental horror filmmaker Kurt Dirt comes the first official trailer for his nostalgic exploitation horror movie DRILLER QUEEN
DRILLER QUEEN is the brand new exploitation film from 29 year old British musician/performer turned filmmaker Kurt Dirt.  Self described as “a cross between ‘Party Monster’, ‘Maniac’, and every HG Lewis movie ever made” DRILLER QUEEN is John Waters influenced Producer/Director Kurt’s second feature film to date.
The plot focuses on a scalp snatching killer drag queen and follows the same retro shot on video style of Mr Dirt’s previous experimental horror feature film LIFE IS CHEAP.  ‘Life is Cheap’ received critical acclaim for it’s artistic and nostalgic elements, and has attracted a solid fan base since it’s DVD and VHS release in March.
Mr Dirt had this to say about the trailer’s release:  “I’m very excited to get stuck in and realise this project as its been something buzzing around the back of my brain for a while.  I grew up in the Manchester Drag / Queer Alt Scene and everywhere you look there’s talent that is just crying out to be put to use in a project like this.

Another great thing about this scene is that the Manchester lot aren’t afraid to get their hands dirty or suffer for their art, much like John Waters ‘Dreamlanders’ or Warhol’s Factory stars.”

www.youtube.com/watch?v=GLilpPQUKf0&feature=youtu.be
For those who would like to see more the film’s funding campaign launches on Kickstarter soon! 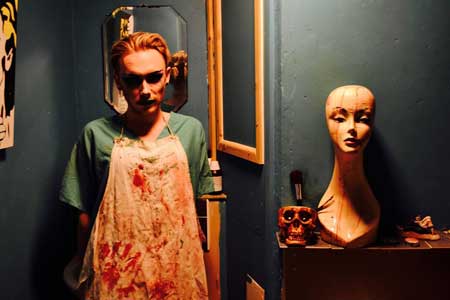 Ida Skinner is a young down and out morgue attendant / drag queen with personality disorders that would make Jeffrey Dahmer blush.  He is constantly ridiculed for not being able to afford nice wigs or clothes but one day this all changes when a dead lady with fantastic hair is brought in.  Unable to resist Temptation Ida scalps the body and finds himself the toast of the local drag scene.  Soon he is inundated with requests for his fabulous human hair wigs and as the morgue begins to dry up he realises he must turn to murder to find the perfect material for his weaves…
The film stars Violet Blonde as Ida Skinner.  This is Violet’s first acting role but she’s no stranger to performance, and Violet caught the directors attention with her wild and outrageous home made looks, veering from immaculate drag to twisted club kid akin to something from a Cronenberg movie.  Violet was originally penned to play “Bubbles” in ‘Life is Cheap’ but had to pull out at the last minute.
The rest of the cast, so far, includes ‘Life is Cheap’ stars Joe Spencer, Ben Atomgrinder, Lou Woodcock, and a few more exciting new names to be confirmed.
As with Kurt’s previous film the directing, editing, special effects etc. will be handled by himself with help from his wife Lisa.  US based writer Heidi Moore is set to assist with the script.
The film is to be scored by 70s/80s Lucio Fulci / William Lustig inspired composer Polypores, AKA Stephen James Buckley.
Social Media links
Driller Queen: www.facebook.com/drillerqueenmovie
Life is Cheap: www.facebook.com/lifeischeapmovie
Share