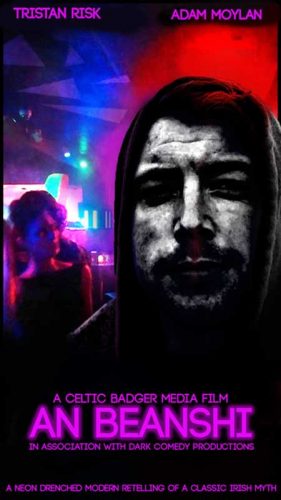 The film is directed by Paddy Murphy of Celtic Badger Media, with Barry Fahy as director of photography. Celtic Badger Media recently secured distribution for their debut feature film, a dark comedy called The Three Don’ts which is currently in post-production. An Banshie takes place during a Halloween party at an abandoned factory that is a facade for something much darker. Murphy describes the film as “A surrealist visual piece, with plenty of nods to Giallo classics, but also modern films such as “The Neon Demon” and “It Follows”. It was loosely inspired by Dantes Infernoas we watch the lead character JAKE SOLOMON (Adam Moylan) descend into the depths of depravity in his pursuit of a mysterious woman dressed all in red (Tristan Risk).

This is the second time Murphy, Moylan & Risk will all have worked together, having been involved in Spade Lion Productions short film, Ground Floor almost two years ago. Tristan Risk said “I am so excited to work with Paddy Murphy again. It’s been too long and as soon as I read this script, it was something I knew I wanted to do”. Adam Moylan added “Working with Paddy is always a blast and I’m just so psyched to see Tristan again.

Ali Gordon of SomeDevil SFX Workshops is building prosthetics especially for the film, while Paddy’s wife, Kathy Murphy is handling the Production Design. Dark Comedy Productions in the US have helped to Co-Produce the film. This is the second in a series of shorts created by the two. The first film, an art horror, called The Sad Ones wrapped shooting Sunday the 17th of July 2016 and stars Brian Clancy, Lisa Tyrell and Piper Murphy.

An Beanshi begins shooting in August 2016.