Home | Killer Shrews Gear up for the Attack

Killer Shrews Gear up for the Attack 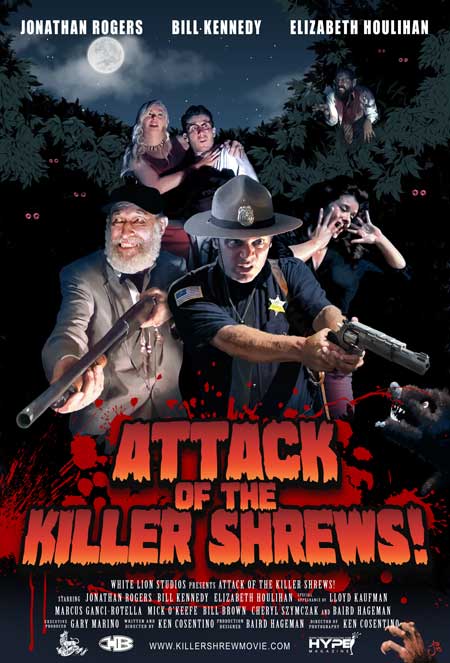 For the past two years, Niagara Falls based White Lion Studios has been cooking up something awful: A splatstick remake to the 1959 cult classic “The Killer Shrews”, a low budget creature feature made popular by Mystery Science Theatre 3000.
The original film, directed by Ray Kellogg and starring James Best, is best known for it’s schlocky monster puppets and dogs in costumes. “We did our very best to stay true to the original,” says writer/director Ken Cosentino, “Our puppets are really quite terrible and there’s hardly any CGI used in our version.” Cosentino has worked as a hired gun for companies such as Troma and The Asylum. This is his fourth feature film as director.
www.youtube.com/watch?v=lmRP3i_Va_E

The remake stars Bill Kennedy and Elizabeth Houlihan, as well as newcomer (to acting), legendary animator Jonathan Rogers. At 78 years young, Rogers promises to steal the show with his physical comedy. The film also includes a special introduction by Lloyd Kaufman, the creator of “The Toxic Avenger.”

“Attack of the Killer Shrews!” is slated to be released this September by White Lion Studios. Says Cosentino, “We decided from the very beginning to distribute it ourselves. We really want to make sure that it finds it’s audience…. b-movie lovers and fans of the original, because this is a love song to Kellogg’s cult classic.”
For more information, please visit the film’s official website at www.KillerShrewMovie.com
Share

Tags Attack of the Killer Shrews!