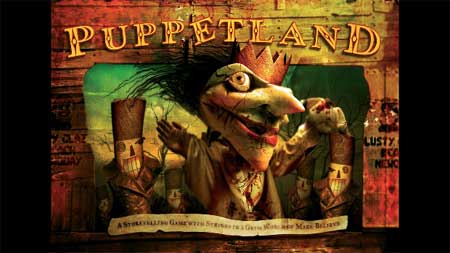 With a sharp rap-rap-rapping at the door, Puppetland is reborn!
Puppetland RPG is available NOW

Arc Dream Publishing announced today that their new expanded edition of the  Puppetland role-playing game is available online at www.rpgnow.com/product/186347/Puppetland. The print version will arive in stores in September. This will be the third incarnation of Puppetland with previous versions being published online by author John Scott Tynes (Delta Green, Unknown Armies, The Unspeakable Oath) and in a 21-page paperback by Hogshead Publishing.

This new edition is 158 pages long, hardback, full color, with full-page paintings by award-winning artist Samuel Araya (White Wolf, Road Runner Records) and new illustrations by Hollie Mengert (Necropolis, Shadowrun Returns) and Heather Hudson (Wizards of the Coast, Chaosium) to go with classic Puppetland illustrations by Raven Mimura (Dungeons and Dragons, Pathfinder, Shadowrun). It features expanded and clarified rules and suggestions for play, a charmingly creepy new storybook about the murder of the Maker of All Puppets, an essay about the history of the game and the role of puppets in the author’s life, and 16 new tales (one-hour scenarios) by some of our favorite writers and game designers. Distributors and retailers interested in the print version should contact Studio 2 Publishing at jims@studio2publishing.com or check out the September issue of Game Trade Magazine!
About the New Puppetland RPG

THE SKIES ARE DIM ALWAYS SINCE THE MAKER DIED

In one golden hour, you and your friends shall weave a tale none will soon forget: a tale of good-hearted puppets in a bad-hearted world. You shall rise up against the savagery of Punch the Maker-Killer with his army of Nutcrackers and his terrible Boys, sewn from the flesh of the Maker of all puppets. You shall be steadfast and true. You shall likely die trying.

Puppetland is a storytelling game. You play a valiant puppet who speaks aloud every word you say. You speak for your puppet and the Puppetmaster says the rest. You surprise each other at every turn, collaborating moment by inspired moment to unlock your own creativity and find the puppet within. This lavishly illustrated edition of Puppetland has been significantly revised and expanded. It includes a grim storybook fable of the Maker’s foul murder; the true story of the creator’s life in Puppetland; and new Tales ready to be played, written by a brilliant collection of authors:

Your puppets are ready to take the stage. But speak softly, lest the Nutcrackers hear — and come to call with a sharp rap-rap-rapping at the door.