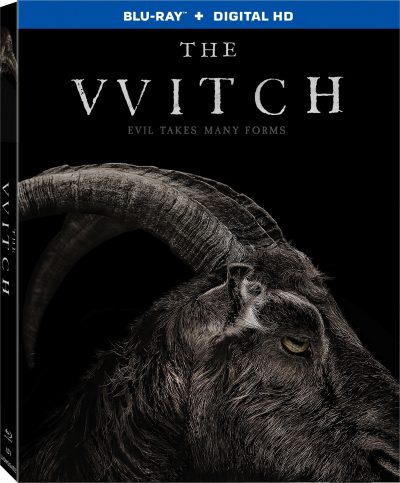 A family of seven in New England try to make a life of their own after being banished by their community, only to find that there are nefarious forces at work.

William (Ralph Ineson) and Katherine (Kate Dickie) are a Puritan couple who have been exiled by the elder council in their community due to a disagreement and are forced to live elsewhere.  Angered by this fate, William vows to raise his family in a small location far away, swearing to be self-sufficient.  They have five children: Samuel, an infant; Jonas (Lucas Dawson) and Mercy (Ellie Grainger) who are twins and are roughly five years-old; Caleb (Harvey Scrimshaw) who appears to be twelve; and Thomasin (Anya Taylor-Joy) who is the oldest at eighteen.  Thomasin does her best to look after the young ones, but all goes awry when she plays “Peek-a-Boo” with Samuel who suddenly and mysteriously disappears.  The family’s stern devotion to God is put to the test as they search for their missing baby while the twins appear to communicate with Black Philip, the name given to the family goat.  Appearing sinister, there is nothing cute about this animal.

Writer and director Robert Eggers, who previously made the short films Hansel and Gretel and The Tell-Tale Heart, makes his feature film debut with The Witch.  His attention to detail is startling and revelatory, pleasing experts on the Salem Witch Trials and those who have made the study of New England the focus of their career.  It should also come as no surprise that he also has amassed a considerable number of credits as a production designer.

Cinematographer Jarin Blaschke bathes the frame in a highly desaturated, almost monochromatic palette that telegraphs to the audience just how devoid of joy are the lives of this family.  You cannot help feeling sorry for them, especially the mother and father who firmly believe in the Word of God and do their best to shower their children with knowledge and admonitions of brutal ramifications in an effort to make them virtuous.

The film also sports a very delicate and interesting audio mix which is comprised of a very creepy score by Mark Korven and ominous sounds that permeate the soundtrack.

The film moves very slowly for a contemporary film, however that is part of the reason why it is effective.  Too often horror films of this type try to hit the viewers over the head with either special effects or clichéd scares that consist of loud sounds and characters who come into the frame “unexpectedly”, but The Witch avoids these tried and tired maneuvers.  The dialogue, culled from court documents and records from the 1600’s, is a bit difficult to make out but it adds an air of authenticity which would be lacking were it not for its presence.  The new Blu-ray, which sports a stellar transfer, provides much-needed subtitles as the accents of the performers make it a challenging listen.

Critics have been quick to refer to the film as one of the scariest films they have ever seen.  I wish that I could agree with them, but whereas The Blair Witch Project (1999) terrified me, The Canal (2014) stunned me, and It Follows (2014) was genuinely unnerving, The Witch is a film that I found to be not only very creepy, but extremely distressing.  How unfortunate it must have been to have lived during the 1600’s when all instances of joy were removed from daily life and one was forced to recite the Bible, or accused of being a witch.  What a life!

The Blu-ray has some nice features: a feature-length audio commentary with director Eggers who is quite eloquent in discussing how the film came about; The Witch: A Primal Folktale is an nice promotion piece that runs just shy of nine minutes; a 28-minute panel discussion with Robert Eggers, Anya Taylor-Joy, Brunonia Barry and Richard Trask; and a design gallery.

Don’t go into this film expecting lots of gore or shocks in-your-face style.  The Witch is a fairly quiet, moody and creepy film that attempts to (and ends up succeeding) give the viewers a window into a past that, mercifully is just that – the past.