We are thrilled to announce that George has been selected to be an official mentor at Shudder Lab’s inaugural horror directing, writing, screenwriting and special makeup FX program taking place this upstate NY in June. Check out what’s cool, obscure, strange, scary and on our radar for April! 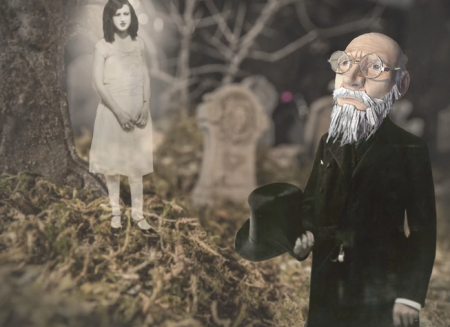 The Planet Of Doom

Halvar the brave seeks vengeance aboard a witch-born chopper, journeying across a psychedelic landscape on a quest to defeat the deadly beast Mordvel for the slaying of his beloved bride. Unwinding across 14 song-chapters filmmakers David Paul Seymour and Tim Granda stoner-doom saga features a who’s who of bands and artists from the doom-stoner-psych-metal universe.

The feature adaptation of the viral short of the same name, R’ha follows a unique vision of an alien world and its inhabitants as they struggle to survive a self-created interplanetary war.

The Grim Reaper Killer is on the loose on prom night in Concord, North Carolina. The feature adaptation of filmmaker Jim Rothman’s eponymous short.

A group of dwarven miners must work together to combat starvation, despair and a mysterious creature after the collapse of a tunnel.

The Grave Of Saint Oran

From Jim Batt, a stop-motion adaptation of Neil Gaiman’s poem “In Relig Odhrain” that keeps the brooding atmosphere & metaphysical horror of the source material intact.

Twenty years after his father mysteriously disappeared, Locke steps past the edges of our dimension and into the beyond in search of him.

A slasher film centered on the “game of games” — Rock, Paper, Scissors. The finished short will be part of the 2016 edition of the long-running Maine-centric genre program Damnationland this October.

In a cabin in the middle of the woods a deaf woman tries to save her marriage to a struggling writer while dealing with the terrors of sleep paralysis.

A look into the mind of a psychopath as a journalist interviews a fame-obsessed serial killer about his past crimes.

No Place For The Living: The Mad Story Of Carl Von Cosel

Fascinating, true story of Count Carl von Kosel who tried to use supernatural and scientific methods to bring back the woman he loved from the dead – told with puppets!

A history of video game box art and the artists responsible for it. Featuring a virtual who’s who of  artists, illustrators, game developers, programmers, fans, collectors and more. From filmmaker Rob McCallum (Nintendo Quest, Power Of Grayskull).

“Be patient. Explore. Observe.” In this ghost-hunting adventure game, join a university research team as they investigate real haunted places.

An 80 page art book and accompanying coloring book collecting the Lovecraft-related work of artist Jacob Walker into one place.

The award-winning stage play that pits the world of musical theater against the creature from the Alien series is looking to leave their Los Angeles home and take the show on the road to New York City.

God Has Amnesia. On Purpose.