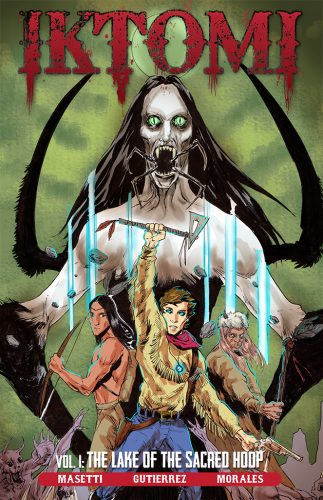 IKTOMI is a Dark Fantasy/Western Graphic Novel that will drag readers into the different worlds of Native American Mythology, post-Civil War America and Dark Magic, all perfectly blended. The well-crafted ensemble cast of rough and down to earth trailblazers of the West, brave Natives and sinister disciples of the Occult, promises to deliver exciting stories filed with blood, grit and glory.

Evoked by Huracan, he is given the task of electing disciples among the Human Race who, through Dark Magic spells and ceremonies, will allow Huracan and his Army to invade and conquer Our World. Among this herd of devoted disciples, there’s Sly, a ruthless bandit who also murdered Jack’s girlfriend (Allie Morrison). A memorable clash soon erupts, and the fate of all Humanity will lie in the hands of Jack, Medicine Eagle and their…”doubles” in Xibalba. The Graphic Novel is penciled, inked and toned by Ryan Gutierrez (who also penciled, inked and colored the Covers) and lettered by Joseba Morales.

Ryan’s ability to bring to light all the characters’s intense cinematographic expressions has been matched by Leonardo’s skills in creating authentic, unique and signature dialogues, making Iktomi a one-of-a-kind saga. Source Point Press has announced that the firs Volume of this brand new creator-owned Graphic Novel will hit the stores in May of 2016.

The primary goal of this Detroit-based indie Publisher is to bring quality new creator-owned content to readers in the form of books, graphic novels, and comics; and to raise recognition of lesser-known talent. They are best known for their titles in the horror and pulp genres.