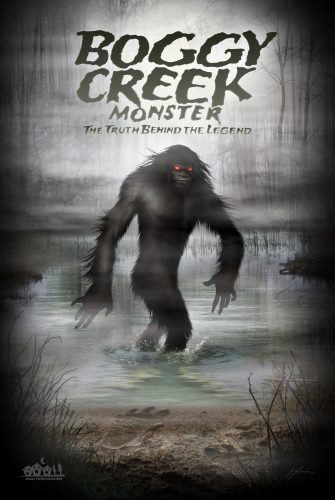 The first documentary feature film to tackle the true story behind the classic horror film, The Legend of  Boggy Creek, is about to begin production in southern Arkansas. The film is titled Boggy Creek Monster  and will focus on the history of Bigfoot sightings in and around the community of Fouke. Delving into  both the classic sightings that inspired the 1970’s drive‐in chiller, as well as sightings that have occurred  more recently, the documentary aims to be the first definitive film history of the Fouke creature. Boggy  Creek Monster is a Small Town Monsters production in association with author, musician, and television  personality, Lyle Blackburn, who released a book on the subject in 2012.
The upcoming Boggy Creek Monster production recently made headlines when it was successfully  crowd‐funded on Kickstarter for $17,000. It raised its initial goal of $9,000 in just four days and became  a true success story by nearly doubling that initial goal in only 29 days. Small Town Monsters creator,  Seth Breedlove, attributed campaign’s success to the ongoing interest in the Boggy Creek case and the  desire of fans and enthusiasts for an in‐depth look at the subject. The film goes before cameras on April  22.
Breedlove said the film will be Small Town Monsters’ biggest production to‐date with massive amounts  of equipment (including cinema‐grade cameras, helicopters, drones for aerial footage, and night‐vision  cameras) being taken to Fouke for the shoot. At the heart of the film will be the sightings of the monster  itself by many locals.
Boggy Creek Monster will be directed by Seth Breedlove, and produced by Brandon Dalo and Lyle  Blackburn who is serving as a consultant on the film. Mr. Blackburn will also appear on camera.  Cinematographer, Zac Palmisano, a Full Sail graduate with previous experience in filmmaking, is set as  cinematographer. This will be the third in the Small Town Monsters series following Minerva Monster  and Beast of Whitehall, the latter of which took honors at the Film Awards and Hollywood International  Independent Documentary Awards.
For more information, visit smalltownmonsters.com or  facebook.com/smltownmonster
Share