Another short film, this time a film from Denmark called THE SUN HAS DIED (Nu er solen død) written and directed by Daniel Bødker Sørensen. The film is in Danish with English subtitles.

One of the things that really interested me was the title. I was expecting a science fiction film, to be honest. Then I looked up a few things and found out that the title of the film is taken from a popular Danish lullaby called “Solen er så rød, mor (The Sun is so Red, Mother)”. This is considered a classic among Danish lullabies, written in 1920 by the Danish novelist, playwright and poet, Harald Bergstedt (1877-1965), with music composed by the world-renowned classical composer, Carl Nielsen (1865-1931).

Once I looked up the English translation of this lullabye, the film suddenly made a lot more sense. So no…not a science fiction film. More of a psychological experiment. 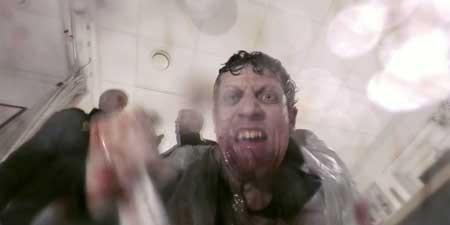 Our story follows Anette (Anette Støvelbæk) as she reports for her first day of work as an overnight housekeeper in a kindergarden. Her new employer leaves her to it as a storm is rolling in. But Anette fears thunder, and as the storm gets worse her fear increases. She begins to panic and is convinced that someone is there with her. But is it just paranoia? Or is there something really wrong?

The film is shot all first-person, possibly using a GoPro or a steadycam. So we go on this adventure literally through Anette’s eyes. I have said before that I really am over first person shooter films, but in this case it really works. The technique is used properly in this film and makes the viewer part of the story.

Ms. Støvelbæk has a lot to carry in spite of not being in front of the camera, but she does an amazing job. After looking up her IMDB listing, this comes as no surprise. She has a lot of experience in Danish television and film.

So using my special “short scale” of one to five, five being awesome, I’m giving this film 4 biscuits.