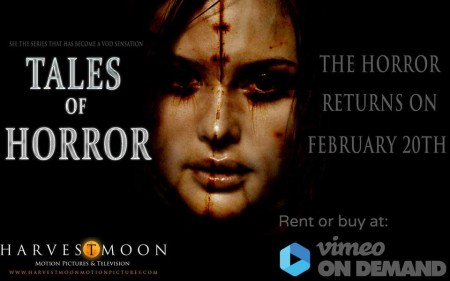 Harvest Moon Motion Pictures & Television announces their new contest “Share The Scare” to tie-in with their hit series, “Tales of Horror.” The contest began on February 4th and will allow fans and viewers to use social media to enter the contest as well as spread the word about the VOD series hosted by actress Jessica Felice as the mysterious “Lilith Death.”

The contest will run through February 20th when “Tales of Horror” returns with its mid-season premiere. Below you will find details about the contest & prizes as well as the giveaway link:

Harvest Moon Motion Pictures & Television Studio SHARE THE SCARE contest has started!!! You can win an awesome TALES OF HORROR prize pack including the following:

A FULL SEASON PASS TO SEASON ONE OF TALES OF HORROR

To win fans will have to SHARE THE SCARE! You will be able to enter by “liking” our Facebook page, following us on Twitter, and Tweeting about us (you can do this once each day of the contest and it will allow you more chances to win.)

The contest will run from February 4th through February 20th when TALES OF HORROR returns for the mid-season premiere.
You can find the Giveaway tab on our Facebook page as well as the link below on our main Harvest Moon Motion Pictures & Television site.