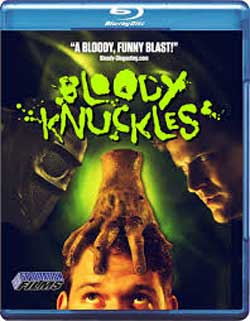 Travis is an underground comic book artist with a penchant for the obscene. When one of his comics insults a Chinatown crime boss, the gangster punishes Travis by removing his drawing hand. A daunted Travis retreats into a life of alcoholic misery. That is, until his hand returns from the grave…

I think it’s fair to say that, as a genre, ‘comedy horror’ is seldom done right. Directors seem to struggle to provide the correct ratio of fear and laugher inducing scenes so the end results usually just get filed under ‘gross-out comedy’. That’s not to say that it is impossible to make a funny horror film, as Rare Exports and What We Do In The Shadows prove otherwise, there just needs to be a bit of care and attention. There’s a saying for when someone doesn’t use any care or attention, they are described as acting like a ‘bull in a china shop’. Well, when It comes to the subtle handing of Matt O’Mahoney’s film, Bloody Knuckles, the bull is driving a crawler-transporter through a warehouse stacked to the rafters with porcelain! Anyway, on with the review and I promise to use less apostrophes. 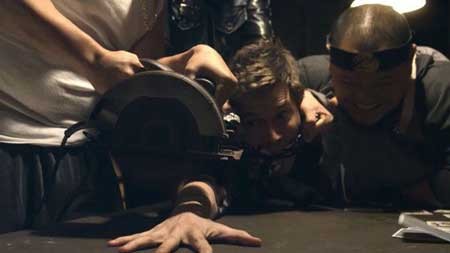 Travis Warner (Adam Boys) is an underground comic book artist who focuses on the controversial and obscene to make his political statements and, after a rather unfortunate accident in which a boy drinks poison, he turns his artistic attention to a local crime boss, Leonard Fong. The latest artwork featured in Vulgarian Invasions unsurprisingly causes deep offence to Mr Fong so, as a warning, he amputates Travis’ right hand by means of a circular saw. After this incident, Travis slumps into depression and alcoholism which neither his step brother, Ralphie (Ken Tsui), or his recent love interest, Amy (Gabrielle Giraud), can bring him out of. However, the story is not over for Travis’ hand which, after being puked on, develops a vengeful mind of its own and sets about bringing Mr Fong to justice with the aid of the gay vigilante, Homo Dynamous, and Travis himself. 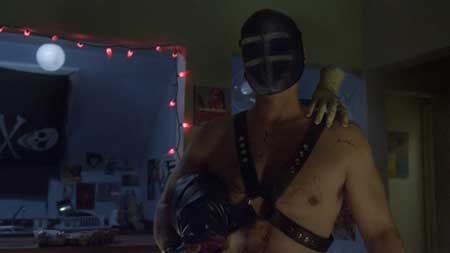 Bloody Knuckles is a silly film from the beginning to the end and, while the humour has definitely jumped over the border into juvenile, it does have its moments. I was instantly turned off at the start as it felt as if O’Mahoney was so desperate to gain some reaction from the viewer he may as well have turned up at literally every showing to poke all the audience members with a stick. However, the film builds up to such a crescendo of stupidity that I couldn’t help but be won over by its idiotic charms. When Homo Dynamous shows up, as the movie heads towards its hilarious finale, is when the cavalcade of cringe finally jumps the shark. 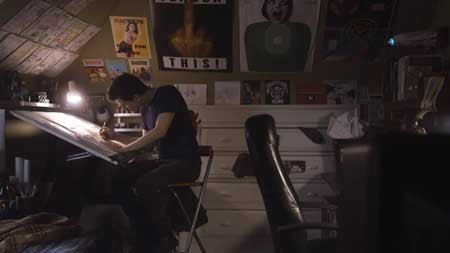 While some of the acting in Bloody Knuckles is particularly stunted, with Ralphie and Detective Frank being the main offenders, the characters are really likeable. Travis is obnoxious but I really warmed to him over the course of the film. He delivers some ridiculous one-liners, such as “I know you don’t have ears but listen to this!” and lets out some gloriously effeminate screams in the later parts of the movie. Generally speaking, however, the characters in Bloody Knuckles fall into one glaring stereotype or another and I hate to admit that very early on in the film I found one depiction of a person with learning difficulties a tad offensive. Maybe it’s just me but I thought we were over that now! 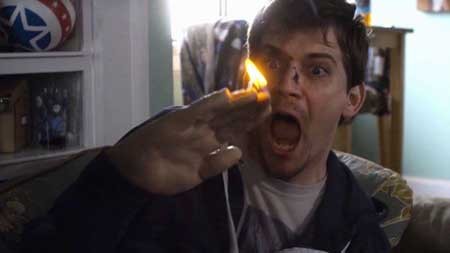 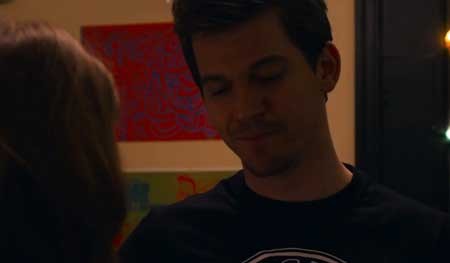 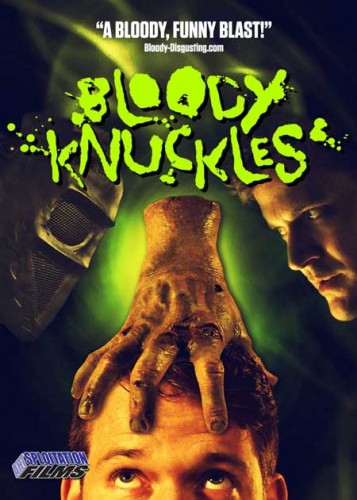 There were things that I liked and didn’t like about Bloody Knuckles. As I’ve mentioned, I found its need to shock something akin to an annoying, attention-seeking child but behind the façade there is some genuine charm, such as the relationship between Ralphie and Travis and the knowingly dubious special effects. If you revel in watching indie films that are awash with childish humour and knee deep in bizzaro, then you can do worse.