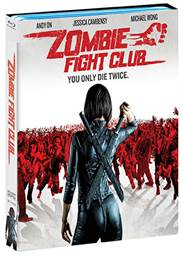 Brace yourself for a gritty, zombie apocalypse action film that delivers non-stop action, edge-of-your-seat thrills, bloody violence and gore in equal measure. On February 2, 2016, SCREAM FACTORY™ is proud to unleash ZOMBIE FIGHT CLUB on Blu-ray and DVD, as well as being made available on digital entertainment platforms. This much-anticipated film premiered overseas and at numerous film festivals to great audience enthusiasm.  ZOMBIE FIGHT CLUB is a must-have for action movie fans, zombie terror enthusiasts and movie collectors.

In a corner of the city, in a building riddled with crime… there is an outbreak of zombies. When one young woman (Jessica C, Double Trouble) witnesses her boyfriend falling victim to the zombie horde, she must team up with a police officer (Andy On, The Viral Factor, Special ID, Cold War) in order to stay alive and escape the building. But the once warm-hearted chemistry teacher, Wu Ming, is now the zombie leader following the chaos, which has transformed him into a cruel, vicious and formidable opponent.

Ratcheting up the terror, an evil organization has begun pitting humans against zombies in a malicious killing game. The good side of humanity has seemingly all but vanished and a world of uncertainty awaits…