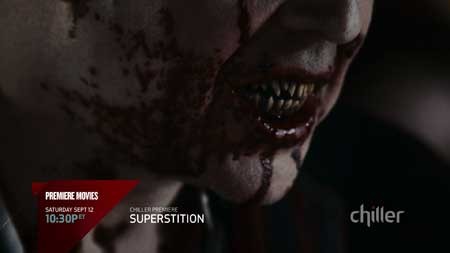 “In the time leading up to the rebrand, Chiller became the only network dedicated to horror entertainment 24/7,” says Shea Pepper, VP Creative, Marketing, Syfy/Chiller. “We wanted to fully embrace that identity, and King and Country gave us an on-air environment as premium as our new mainstream content.”

The goal for K&C was to create a dynamic, contemporary graphics toolkit that truly possessed the soul of the Chiller network. Using a combination of live-action and VFX, K&C took Chiller’s signature “sliced” screen look to a gritty level with photo-real cracked glass and creepy environments, such as a forest, an abandoned house, a victorian bedroom and a subway tunnel. The transitional device of mirrored footage allowed for endless graphically-composed scenes. 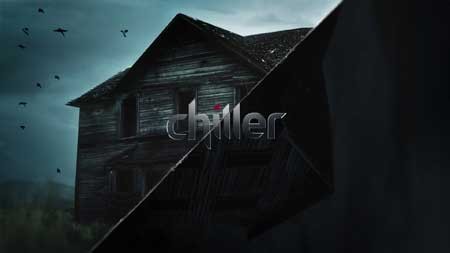 “We wanted to develop a modern conceptual style that echoed Chiller’s film-dominated content without actually showing violence or gore,” says Rick Gledhill, Partner/Creative Director at King and Country, who led the project. “It had to be atmospheric, textural, and gripping – but most of all, we wanted to establish a visceral response that made being scared fun.”

Within each promo environment, an ominous character — a man with a chainsaw, an Edwardian nurse, a stalker or a forest nymph — randomly jumps out at the viewer from various places on the screen, depending on how the promo is edited. Animated shards of glass crack and slide to become the base for navigation of programming-related information.

“King and Country’s previous work for other partners was beautiful, captivating and distinctive, and we very quickly saw they would be a good fit for our kind of content,” says Pepper. “They not only demonstrated a knowledge of the type of branding we needed and wanted to achieve, but they also figured out how to ensure this package worked for us in the long term.”

K&C developed a comprehensive messaging system that unified and encompassed all of Chiller’s current branding systems and looks, including their three signature nights: “Throwback Thursday,” “Friday Night Premiere,” and “Don’t Watch Alone.” It was imperative that the graphics toolkit not only be highly flexible and unified for a broad range of promotional material and packages, but also align with Chiller’s overall brand identity.

“We devised a curated system of short elements that act as modular building blocks, which can be effortlessly interchanged in many ways,” says Gledhill. “For instance, sometimes the stalker in the tunnel will get you, and sometimes he won’t. Sometimes you’ll see the ghost in the mirror, and sometimes you won’t. It’s the editor’s choice — and this ability to turn the characters on and off makes the package interactive for the the viewers and hopefully, sends a chill up their spines.”

True to the K&C approach, every detail was well planned out, so there were no surprises during the shoot or in postproduction. The environments were created entirely in CG in After Effects and Cinema 4D. The characters were shot on green screen during a one-day shoot in Hollywood, CA. K&C shot the live-action on a 6K Red Epic Dragon camera, which also provided Chiller with print assets.

Gledhill credits Chiller’s in-house team, which provided versioning support on a number of items, so K&C could concentrate on the main package elements, making for a great collaboration.

“King and Country’s roots are in design-based animation and production, so we felt our sensibilities were very well-suited for this rebrand,” concludes Jerry Torgerson, Partner/Executive Producer of K&C. “Prior to this project, we had the privilege of working closely with this same creative team at Syfy and showed our proven talent and skills in design and branding. We went into this Chiller project with a lot of trust already established, and it was rewarding to see some of our more ambitious ideas come to life in the final identity.”

The controversial MR. SAM – “A mortician falls in love with his corpse” 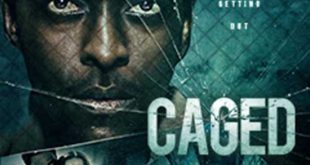