Two of 2015’s most critically acclaimed genre films – TURBO KID and TALES OF HALLOWEEN – are now “Certified Fresh” on Rotten Tomatoes.  With the year drawing to a close, we hope you’ll consider these film’s for any year-end “best of 2015” film lists you may be planning. 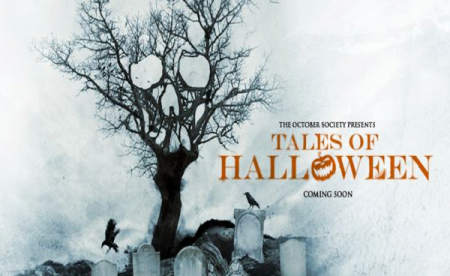 Winner of multiple awards including the 2015 SXSW Film Festival Audience Award for Midnighters, TURBO KID is a post-apocalyptic retro-futuristic tribute to the 80s action-adventure films like Mad Max, starring genre icon Michael Ironside (Total Recall, Starship Troopers).  An orphaned teenager named The Kid (Munro Chambers) is scavenging for relics when he befriends a mysterious girl. Yet, when she is kidnapped by Zeus (Ironside), the tyrannical leader of the Wasteland who murdered The Kid’s parents, The Kid must face his ultimate destiny: destroy Zeus, avenge his parents’ death and get the girl of his dreams.  itunes.apple.com/us/movie/turbo-kid/id1028217287

TALES OF HALLOWEEN sees eleven directors, renowned for their contribution to the horror movie genre, join forces to create a series of interconnected stories, each with a unique Halloween theme. Ten short films have been woven together by a shared theme of Halloween night in an American suburb, where ghouls, imps, aliens and axe murderers appear for one night only to terrorize unsuspecting residents. itunes.apple.com/us/movie/tales-of-halloween/id1042511764