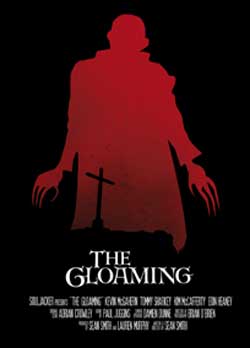 Ireland, 1849. The Great Famine. As a church bell tolls and the gloaming descends, a father and son working the land are forced to confront an ancient evil.

Yet another short film. Today we have THE GLOAMING, a tasty entry from Ireland, written and directed by Sean Smith.

For those who don’t know, I looked up the word “gloaming” – twilight, the time after sunset and before dark. Important to know when watching this film.

The story is set in 1849 during The Great Famine. Father and son James (Tommy Sharkey) and Tadgh (Kevin McGahern) are harvesting peat in the countryside. They must hurry in order to be finished and indoors before the gloaming. Tadgh finds out why in the worst possible way.

The film is very Hammer-esque, both in overall look and presentation. It’s not in English, but it is subtitled in English, so you don’t have to know Gaelic to watch it. Don’t let the subtitles turn you off, though. The dialogue is really minimal and not all that necessary to get the gist of the story.

So using my special “short scale” of one to five, five being awesome, I’m giving this film 4 peat logs.