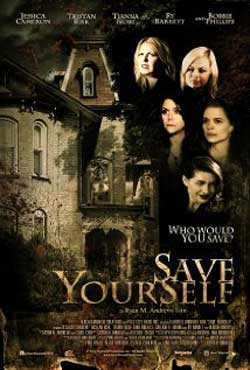 Five female filmmakers en route to screen their new horror film in Los Angeles, experience their own real life terror when they cross paths with deranged scientist hellbent on using them for his twisted experiments.

The mad scientist in Ryan M. Andrews’ Save Yourself is a brooding, old-timey country man. At first he seems warm and welcoming; offering various hospitalities to his guests. Along the walls of his rural home are dusty black and white photographs; unmistakably from the wartime 1940s. The doctor and his brunette beauty of a wife stand stern and flat faced, a dead still, like many portraits from that era. But something isn’t right; the couple doesn’t look a day older than they did during the second world war.

A group of female filmmakers, led by sassy director Crystal Lacroix (Tristan Risk), are heading to a Los Angeles screening of their latest horror movie. Alongside Lacroix are producer Dawn Sommerville (Lara Mrkoci), quirky screenwriter Lizzy Miller (Caleigh Le Grand) and scream queens Kim and Sasha Tobin (Jessica Cameron and Tianna Nori, respectively). They’re eager to storm down south, but events take a dark turn when Crystal goes missing at a rest stop. The remaining girls split up and search for her, eventually finding themselves at the door of Chris and Astrid Sauter’s farmhouse.

What follows is a by-the-books indie horror flick, one that tries to escape the horror genre’s formulaic chains, but ultimately adheres to several tired cliches. Canadian Writer/Director Andrews had some underground success in 2012 with the post-apocalyptic gorefest, Sick, so he knows how to construct a horror narrative. The script dips into meta territory often — Lacroix points out the killer’s droning monologues — and even has some thought-provoking themes; all cumulated in a slow burning mix of torture p*rn and old woods slasher material.

Andrews’ directing is effective and escapes a low budget feel with creepy locations and visual storytelling techniques. If you pay close attention, he leads on with clues and subtle exposition, giving the film atmospheric depth. Cinematographer Michael Jari Davidson delivers beautiful shots, keeping things sleek and effective. Unfortunately, the talent in front of the camera isn’t up to snuff. The leading ladies muddle their lines often. Risk — who has the most interesting arc — delivers a flat performance, which is unfortunate because her character is the foundation of Save Yourself’s sketchy ethos. However, Jessica Cameron is a treat to watch, and the formidable Ry Barrett shines as the twisted experimenter. His “better half”, Mrs. Sauter (Elma Begovic), is menacing, brutal and unforgiving towards the kidnapped ladies, she’s as much the film’s star antagonist as her diabolical husband.

A lack of suspense plagues the movie; characters spend too much time locked up in a grim basement, crying, conversing and waiting for the horrors that await upstairs. Why not include a chase through the surrounding forests, or an extra dose of hand to hand combat? The girls don’t stand a chance, and it’s hard to care about any of them. Allocating time to expository dialogue isn’t necessarily a bad thing, but this collection of “badass chicks” just aren’t interesting. And the juicy subtleties in the story don’t flesh out until the very end, when boredom has already taken effect. 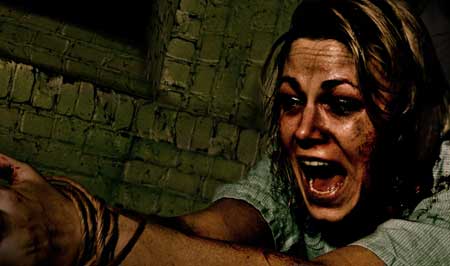 Save Yourself is worth watching. It’s technical achievements, reflective motif (would you commit monstrosities to stay young forever?) and clever twists show Andrews’ potential as a filmmaker. Next time he needs stronger protagonists, a meatier first half, and ways to gracefully introduce his ideas.