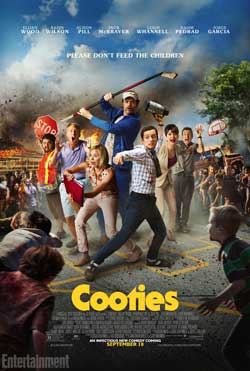 A mysterious virus hits an isolated elementary school, transforming the kids into a feral swarm of mass savages. An unlikely hero must lead a motley band of teachers in the fight of their lives.

Review: As some of you may know, I love me some Comedy-Horror. My favourite sub-genre in the vomit filled, limb torn, puss smeared, blood soaked rainbow that is horror, nothing makes me happier than to watch a film with gore and comedy spliced together like a bastard child of Dr. Moreau, so when I was assigned Cooties, I was obviously excited. I’ve been waiting for the film to grace my eyeballs since my knowledge of its production a few years ago. I won’t say my expectations were high considering the star power and the production companies involved, but I will admit they weren’t low either…

So the low-down of Cooties in a disease ridden nutshell: Infected chicken nuggets are manufactured, consumed by school kids and said kids turn into zombies. Simple and to the point. You can easily leave your brain at the door with this film and just enjoy.

Once we witness the chicken nugget infection via an intro of a very authentic chicken “preparation” that will make a vegetarian’s stomach churn, those who don’t like seeing the meat processing, er, process squeamish and those like me cheer with delight, we meet our “hero” Clint, played by the perpetually doe-eyed, Elijah Wood. A teacher/writer who is likable enough to relate to, but is self-centered enough to spout his writing aspirations to anyone willing, and unwilling, to listen, even getting students to read chapters from his book in class, Clint has returned home from New York trying to write his first horror book but has taken up sub-teacher work at the very primary school he attended back in the day.

When Clint arrives, the vice principal relays the “story convenience”– I mean, “no cell phone” rule and then Clint, and we, are introduced to the rest of the colourfully misfit teachers of the story, mainly being Rainn Wilson as Wade, the typical washed-up, testosterone filled gym teacher (though they do force a softer side later on), his girlfriend and Clint’s love interest, the always positive Lucy, played by Alison Pill and Doug (Leigh Whannell), the socially inept sex-ed teacher who has no tact and no qualms about going elbow deep in feces and brains. Jack McBrayer is also part of the cast but he has very little lines and whenever he does have dialog it’s inconsequential or hinting that he is gay. Pretty unfunny stuff, to be honest.

To the story’s credit, things get going pretty quickly, and when the shit hits the fan we are treated to a playground full of festering children tearing teachers limb by limb and devouring their innards like a horrific all-you-can-eat buffet. Clint and the surviving teachers find themselves trapped inside the school’s walls as the students rule the surrounding grounds, but not for long as the zombified students, who have some smarts to them over your typical zombie horde, breach the school’s walls, ravenous for adult brains. Clint and Co. must flee through the halls to try and stay alive long enough for help to arrive… If it does… 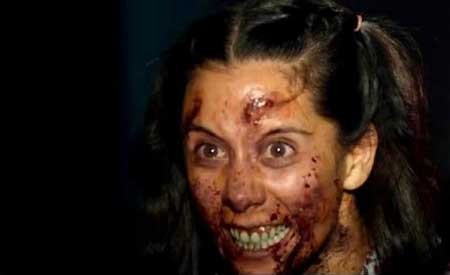 Cooties was an entertaining movie, no doubt. Though not laugh out loud funny, the interactions between characters and their dialog was witty and snappy, leaving you smirking like an idiot. Acting was great, as expected, considering the talent involved and cinematography also was very good. I loved how the constant sounds of zombified children filled the background as the characters spoke, etc. It made the experience more realistic and involving. Gore was nice, squishy and red and used sparingly, but to good effect.

Unfortunately, redundant, underdeveloped character development and an awkward attempt at giving Clint a love interest let down the script. For those who are sticklers for character arcs, themes and all that hoity toity stuff, you will find absolutely none of that here. This is a bare bones script that just wants to have fun. Though I personally prefer my comedy-horrors to be light on character development, when it is done right it can make the film shine even more. Tucker and Dale vs Evil and Shaun of the Dead are prime examples. Unfortunately, the attempts made in Cooties felt awkward and forced. They didn’t help the story, the characters or their journey at all and felt tacked on to pace the film out. Don’t get me started on the stereotyped Asian janitor…

Like many horror films, Cooties suffered from the typical plot conveniences of the genre, one being our monsters kill/eat/destroy anything that’s not central to the script within seconds, but let the main characters ponder about so their dialog can be delivered before attempting anything malevolent. I find this annoying and detrimental to the story as it removes the feeling of danger and urgency the script tries to build.

The above are just nit-picky things that I, as a reviewer, need to pay attention to and review on. You can easily disregard it all since Cooties isn’t trying to be anything more than what it is, however, my biggest problem was the third act. It waned as it panned out, with the writers obviously running out of steam as a Deus Ex Machina that would bring Sophocles to his knees was utilised instead of developing a pretty cool set-piece (they had the location and the props, but it was just rushed through) to really drive it home. The ending was so abrupt I thought my file was corrupted on initial viewing. Cooties just ends without a typical closing scene or anything to indicate the movie is ending. It was completely jarring, weak and let down the script as a whole. The writers were clever, for the most part, right up until the third act and particularly this point where it seems that they just ran out of ideas. Does it allow for a Cooties Part II? Yes it does, but this could have been accomplished in another, more satisfying way. 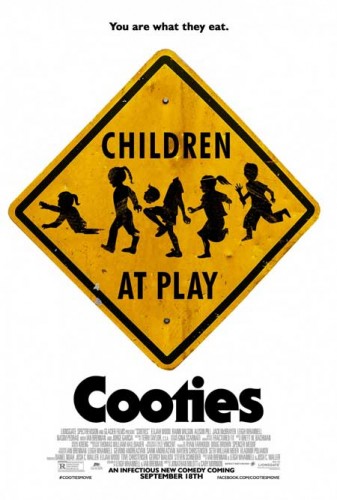 Would I watch this again? Though it isn’t of the same caliber as Shaun of the Dead, Tucker and Dale, Army of Darkness or Dead/Alive, Cooties is a fun little film that has more than enough to satisfy comedy-horror fans. The film just wants you to sit back and revel in the absurdity and violence of the story without having to worry about overarching themes, subplots and other cerebrally exercising feats.

Would I recommend it? Definitely. This is a film best viewed with a group of mates, some junk food and a good sense of humour.