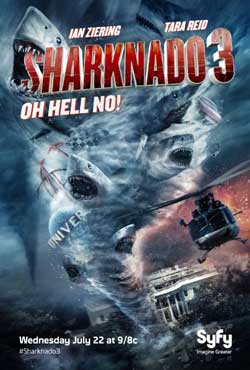 A monstrous tornado unleashes ravenous sharks from Washington, D.C., all the way down to Orlando, Florida.

In a modern world where the internet is a big part of anyone’s life, social media can be a big influencer in whether or not a movie is seen as a success.  Sure, money comes first when it comes to theatrical movies.  There is no doubt about it.  But when it comes to television movies, such as those which air on SyFy, the resonance that a movie has in the world of social media can mean a lot.  The more people are talking about something, the more it is in the cultural mind.  If people like it and talk about it, they probably want more of it.

That was the case in 2013 when Sharknado hit the world by storm.  The movie brought back some stars that people might consider washed up and pitted them against tornadoes that were full of sharks.  These stars included Tara Reid and Ian Ziering.  Social media was buzzing during the lead-up to the initial airing and exploded as the movie aired.  SyFy quickly threw together a sequel which improved upon the formula of the first while bringing in more recognizable stars who were no longer considered A-list.  The 2014 sequel was an even bigger hit on social media and led to a third movie being produced, which aired for the first time a few months ago. 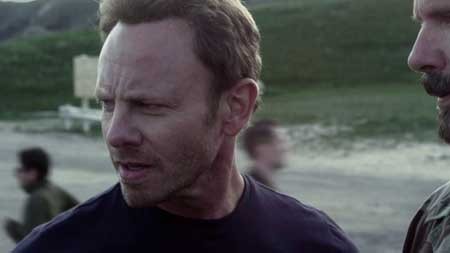 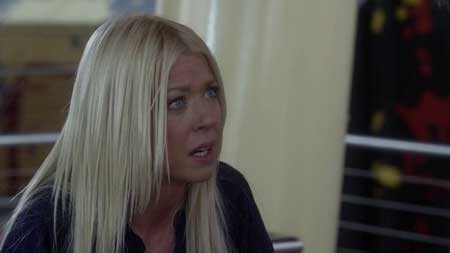 The evolution of the Sharknado franchise is interesting to look upon.  The first movie was a typical storm road movie from The Asylum.  There’s a storm, the main characters flee, then they have to fight the storm and stop it.  It took the story seriously, and the characters were serious.  The sequel got rid of the story being serious and just had fun with the concept.  The main characters were serious, but the movie was playing around and having fun.  The third movie went even farther in that direction to the point of finding the perfect spot to play around with these movies. 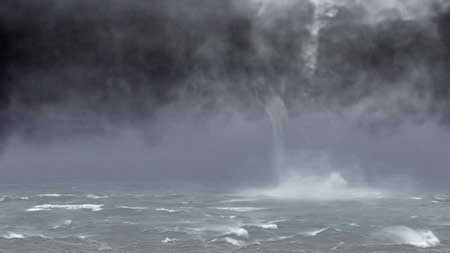 Sharknado 3: Oh Hell No! sees the return of Ian Ziering and Tara Reid as the main heroes of the franchise.  It also brings back Cassie Scerbo from the first movie and Mark McGrath from the second movie.  As the series has progressed, the severity of the storm has increased steadily.  This time out, the sharknado is ready to take down the entire eastern coast of the United States of America.  Fin Shepard (Ziering) first encounters it in Washington with his brother-in-law Martin Brody (McGrath).  From there, he road trips down the eastern seaboard to Florida to find his wife April (Reid) and daughter Claudia (Ryan Newman).  Along the way, he is picked up by Nova (Scerbo) and her sharknado fighting partner Lucas Stevens (Frankie Muniz).  Finally, we are introduced to Fin’s dad Gilbert (David Hasselhoff) who is the only person that can save the world from this threat.

The popularity of the Sharknado franchise has exploded since the first movie’s premiere in 2013.  Many celebrities have wanted to dip their toes in the franchise.  This has led to the second and third installments being filled to the brim with cameos and bit parts for many notable people.  This trend starts early in Sharknado 3: Oh Hell No! as Fin is receiving a commendation for his work in saving New York.  Not only do people like Mark McGrath and Robert Klein return from the second movie, but we get newcomers such as Bill Engvall, Lou Ferrigno, Mark Cuban, Maria Menounos and Ann Coulter joining in on the shark killing fun.  The cameos in this portion are plentiful.  However, they soon take a back seat to the action that unfolds as the sharks descend upon the capital of the USA.  Though Mark Cuban isn’t the greatest actor by any stretch of the imagination, he and Ziering play off of each other well and are having a lot of fun running through the fake White House decked out in guns and other weapons.  Their time together is one of the highlights of the movie and brings you right into the attitude of what the Sharknado franchise is. 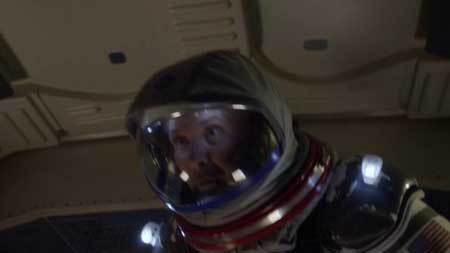 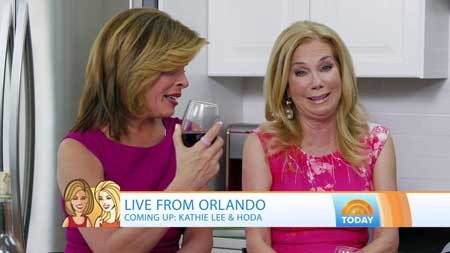 The cameos continue throughout the movie.  The bulk of Sharknado 3: Oh Hell No! takes place at Universal Studios Orlando and on Fin’s road trip to get there and meet up with his family.  This road trip brings back Nova, who was noticeably and sadly absent from the second movie with no explanation at the time.  We discover in the threequel that she has been busy training and studying to prevent sharknados from hurting anyone else.  This portion of the movie is the meat of the story.  It is your basic man saving family storyline, played out in a way that only the Sharknado movies would play it.  While Fin is making his way to Orlando to find his family, April is struggling with her mother (played by Bo Derek) over whether or not Fin is a hero and whether or not she is a hero.  There are moments when her mother holds her back from saving people.  It comes to a satisfying enough conclusion when Fin shows up and saves his family from the sharknado that is ravaging the park.  Notable guest appearances in this section include Chris Jericho, Kim Richards (playing Babs, a good reference to Animal House), and George R.R. Martin.

We are also treated, throughout the movie, by a series of news coverage cutaways.  This is something that first happened in Sharknado 2: The Second One, as we continuously went back to the set of The Today Show.  The newest installment in the franchise continues this by expanding to having more Today Show hosts and having them all experience the sharknados.  The use of the morning news/talk show is a good way to convey just how widespread the problem has become.  It is also some good brand synergy with the SyFy/Universal/NBC link.  Having The Today Show and Universal Studios Orlando in a hit SyFy movie can only help to make more brand awareness. 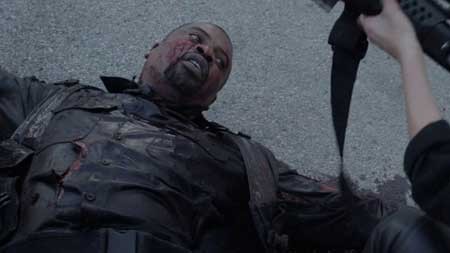 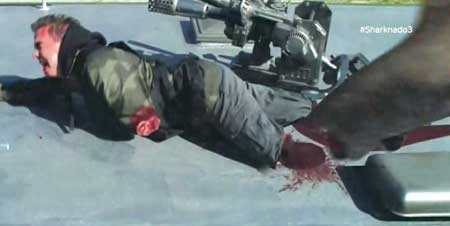 The final portion of Sharknado 3: Oh Hell No! involved Fin and his father Gil going into space in order to stop the Sharknado from overtaking the entire eastern seaboard.  Where the first two portions of the movie were building upon the previous installments of the Sharknado franchise, this section brought the movie to a whole other level.  The space expedition begins with Fin walking to the shuttle while a song about being a badass plays in the background.  That one detail perfectly exemplifies the Sharknado movies, an on the nose declaration of badassery.  The sequence continues with the trio of Fin, Gil, and April in space, destroying the sharknado, inadvertently bringing the menace to space.  That’s right.  Fin fights sharks in space.  He even gets to use a laser chainsaw. 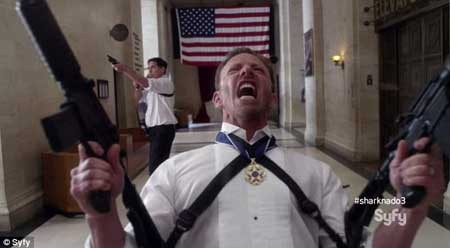 It gets difficult as a franchise moves forward to up the ante each time.  If one movie goes crazy and audiences eat it up, the next movie has to go even crazier to get the audience as excited.  Sharknado 3: Oh Hell No! managed to bring the same sort of balls out mentality that the previous two installments brought, while taking audiences to new places.  The White House sequence alone is worth watching, and the space adventures of the Shepards were the icing on the cake.  In much the same way as Gil saluted his son at the end of the movie, I salute the people behind Sharknado for finding their footing and making a great, insane action movie in Sharknado 3: Oh Hell No!  I’ll be there when the fourth airs on SyFy.