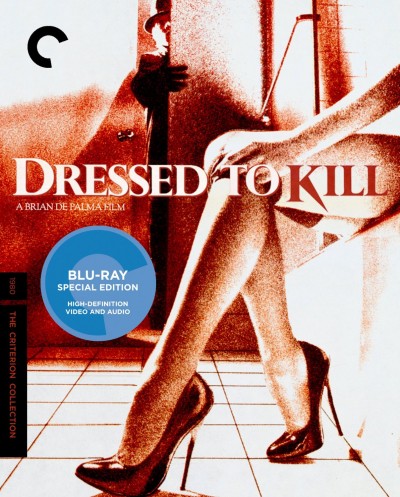 PLEASE NOTE: This review is of both the film and the new Criterion DVD and Blu-ray releases which are both available now. When the discs were originally scheduled for release in August, there was an error in the transfer of the film which is discussed on Criterion’s page here. A second pressing of the discs have been made. In order to make sure that you purchase the correct disc pressing, check the rear of the packaging in the section that says the following in small red lettering: “Under exclusive license from Twentieth Century Fox Home Entertainment LLC…” On the last line it will have the words “Second printing 2015”. This is the correct pressing you want. It will also have the words “Second pressing 2015” on the actual disc itself.

A frustrated New York City housewife looks for adventure in the wrong place and ends up paying for her curiosity with her life as a killer stalking the city now has his eye on her son.

Brian De Palma’s Dressed to Kill (1980) is one of the director’s best and most entertaining works. It also appears to be ahead of its time in some ways while simultaneously paying homage to Alfred Hitchcock’s Psycho (1960), something Mr. De Palma also did to great effect with his excellent 1973 Staten Island-lensed thriller Sisters, a film that Stephen King loved so much that he championed Mr. De Palma to make his own novel Carrie into the 1976 film of the same name. His 1976 romantic thriller Obsession was also inspired by the Master of Suspense.

Filmed in the autumn of 1979 and released on Friday, July 25, 1980, Dressed to Kill pits Kate Miller (Angie Dickinson) as a woman who is bored and sexually frustrated in the Big Apple as she looks to spice up her boring afternoons. Her teenage son Peter (Keith Gordon, who would play Arnie in John Carpenter’s Christine in 1984 before becoming a film director) is a computer geek at a time when being a computer geek meant being male and having zero sex appeal (he has built a computer that carries binary numbers; he is also adept with booby traps and other forms of technology). Kate is under the psychiatric care of Dr. Robert Elliott (Michael Caine) for her frustrations and attempts to seduce him during a session, but is rebuffed. 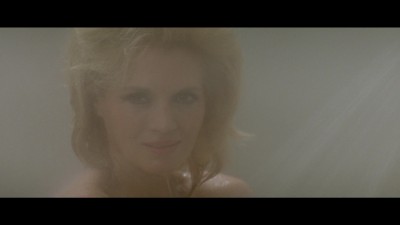 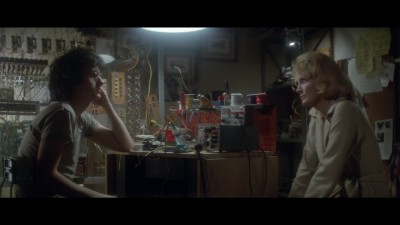 An afternoon trip to the Metropolitan Museum of Art in New York results in the film’s most talked about scene wherein she is “picked up” by a stranger who never says a word, and playfully entices her in an extended and wordless “chase” in the museum which ends with illicit sex in the backseat of a taxi and climaxes (no pun intended, of course!) with the quickest female orgasm in cinema history. Kate ends up spending the evening with her mystery man in his swanky Front Street apartment, only to discover surreptitiously that he has a venereal disease. This leads her to rush off in haste and be unceremoniously dispatched by a razor-wielding nut job in a carefully orchestrated elevator murder sequence that is intercut with the introduction of Liz Blake, a call girl played by Nancy Allen, who witnesses the murder. 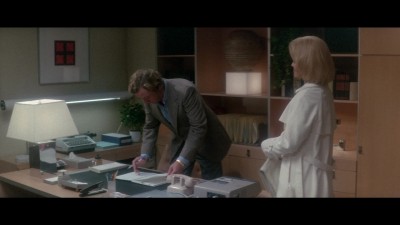 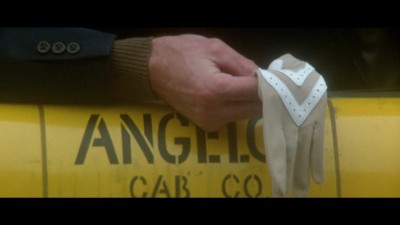 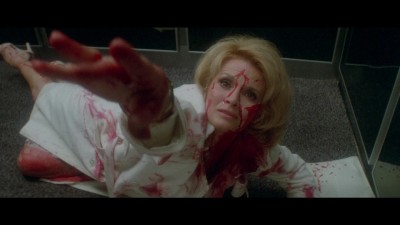 Her son is obviously shattered by his mother’s death, although we only see his stepfather very briefly – at the start of the film during a “wham-bam-thank-you-ma’am” sex scene with Kate, through the shower as he shaves, and later on after Kate’s murder when Peter is at the police station. Detective Marino (played brilliantly by Dennis Franz) tries his best to get what info he can out of Liz and Dr. Elliott, but Peter teams up with Liz to find the killer themselves who appears to be a man dressed as a woman, with long blonde hair and dark sunglasses. The obvious tip of the hat to Psycho, complete with Ms. Dickinson’s death scene a third of the way through the film (making her a modern day Janet Leigh), should give a clue to the killer’s real identity. 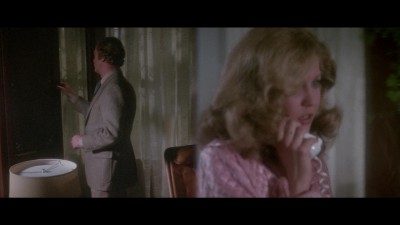 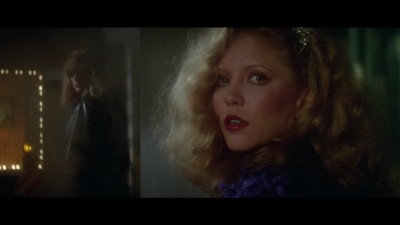 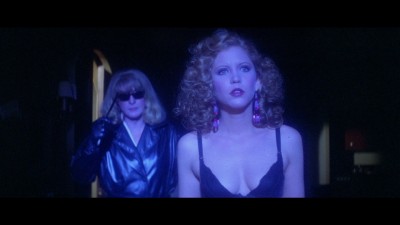 There is a great deal of sexual tension and graphic violence in Dressed to Kill, so much so that when the film was released 35 years ago it was initially given an X rating by the MPAA. Jack Valenti, who was president of the MPAA at the time, had stated prior to the film’s release that the political climate in the U.S. had been shifting to the right which in turn meant more conservative attitudes toward sex and violence (those of us who lived through the Meese Report days know this all too well). Interestingly Zombie (1979), the Italian Lucio Fulci gross-out film, was released the same day as Mr. De Palma’s film, unrated and with a similar caveat that appeared on the poster of George A. Romero’s Dawn of the Dead two years earlier since newspapers would not run ads for X-rated films. So, violence was certainly still acceptable on the big screen, as long as it was rated accordingly.

Some of the dialogue in the film was also sexual in nature and had to be altered, but the cuts that were made for the theatrical version have all been reinstated for this Criterion release. In this day and age wherein XXX-rated hardcore p**nography is just a computer mouse-click away, just about anything in Dressed to Kill seems tame in comparison.

Mr. De Palma has consistently received critical flak for “ripping off” Alfred Hitchcock, but this time he manages to create and sustain a visual style all his own. Hell, even Vincent Canby liked the film, which is saying a lot! Had Bernard Herrmann still been alive (the great musical collaborator of Mr. Hitchcock), he no doubt would have been commissioned to write the score, having already delivered two excellent scores for Mr. De Palma’s Sisters (1973) and Obsession (1976), the latter of which is sumptuous and gorgeous, clearly one of his best. His successor proved to be quite formidable. Pino Donnagio, who wrote brilliant music for Don’t Look Now (1973) and Tourist Trap (1979), delivers another great piece here, and has gone on to work with Mr. De Palma on many other films.

Dressed to Kill has been released in many formats since its theatrical release. Warner Home Video released it on VHS in the big clamshell box at least twice; Image Entertainment released a somewhat letterboxed laserdisc; and MGM/UA released it on both DVD and Blu-ray in a special edition. Criterion has just released it on DVD and Blu-ray, and the latter is the way to go. The anamorphic Panavision frame is retained and the transfer is of the usual excellent quality that we have come to expect from Criterion, and they once again deliver the goods. This is necessary to retain the split-screen technique that the director uses to great effect.

This new edition is loaded with extras, some of which are new and some of which have been ported over from the aforementioned MGM/UA DVD:

Interviews (all new and shot in high definition):

Brian De Palma (19:25) – a discussion with filmmaker Noah Baumbach wherein the director talks about how he saw a transsexual on Phil Donahue’s show and this planted the idea in his mind for the film. With the recent news regarding Bruce/Caitlyn Jenner, the subject matter of “transitioning” from one sex to another is more topical than ever now.

Nancy Allen (16:10) – talks about how she was filming 1941 with Steven Spielberg and how Mr. De Palma wrote Liz for her; speaks quite eloquently about how Ann Roth’s costumes made her feel both sexy and strong as well as vulnerable; and her work with Michael Caine and how he made her feel at ease when she was dolled-up in lace and garter belts.

George Litto (12:02) – discusses his experiences working with Mr. De Palma on some of his best films.

Pino Donnagio (15:41) – talks about his collaboration with Mr. De Palma and his wish to score some of his action films, not just thrillers.

Victoria Lynn Johnson (8:42) – The Penthouse Pet of the Year explains how she came to be Angie Dickinson’s body double in the shower.

Stephen Sayadian (10:15) – one of the most neglected and never-talked-about areas of film marketing is the art of the movie poster. Mr. Sayadian started out with Hustler Magazine and discusses how he came to construct the image that became the key art for the film. I would have loved to have heard more about his career, and this is an area that I would love to see future DVD and Blu-rays explore and discuss. Movie poster art, up until the homogenized and bland creations done on computer workstations, were truly art, and conveyed our first impressions of a film. Criterion, which usually designs their own cover art for their discs based on key moments from a film, wisely used Mr. Sayadian’s poster art for their cover.

The Making of Dressed to Kill (43:51) – a 2001 documentary shot in standard definition which includes recollections from the cast and crew.

An Appreciation by Keith Gordon (6:04) – Keith Gordon in 2001, shot in standard definition, on how the film operates visually and with no dialogue in the most memorable sequences.

Storyboards, visual comparison between the R-rated and X-rated versions, and the trailer round out the supplements.

Let’s hope that Criterion bestows their grand treatment on Obsession, which has been available in the UK in a much-improved Blu-ray for four years.