Rate This Movie SYNOPSIS: Detective Eva Thörnblad must begrudgingly return to her hometown of Silverhöjd several years after her young child disappeared from a nearby  forest lake. The child’s body was never found and therefor presumed drowned, though Eva  has always felt like there was more to what happened that day. Upon her return to the strange, small town another …

Shudder Giveaway Free 30 Day Trial of Shudder brought to you by Horrornews.net !  Shudder has partnered with Horrornews.net to make this incredible offer possible.  FREE is what happens when the # 1 horror screaming service meets the # 1 horror news website.   Use the  promo code: HORRORNEWS to unlock your free trial. Sign up here: 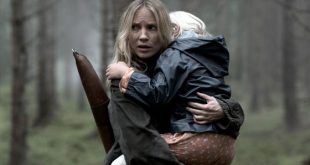 AMC’s horror streaming service, Shudder has announced their latest television series acquisition, Jordskott. The series is a critically acclaimed Scandic-Noir hit and Shudder will exclusively premiere the first two episodes on April 6th with two new episodes released each week. Think of it as the new take on the Nordic noir detective genre (The Killing, The Bridge) with supernatural, folk horror twists.