Film Review: The Bird With The Crystal Plumage (1970) 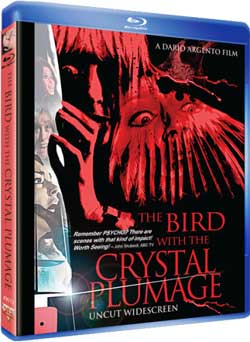 “Sam, an American writer in Rome, witnesses a murder attempt on the wife of the owner of an art gallery by a sinister man in a raincoat and black leather gloves – but Sam is powerless to do anything as he gets trapped between a double set of glass doors in going to her aid. The woman survives, and the police say that she is the first surviving victim of a notorious serial killer. But when they fail to make any progress with the case, Sam decides to investigate on his own, turning up several clues that point in the direction of just one possible suspect – assuming that he really knows who he’s looking for.” (courtesy IMDB)

Since the passing of Mario Bava in 1980, Dario Argento has pretty much reigned as the uncrowned king of Italian horror and Giallo movies. Argento’s films are consistently stylish, assaultive and cinematically inventive, and has proven to be a big influence on a number of other directors, perhaps most notably John Carpenter, who seems to have learned several tricks of the trade from this Italian master of horror. Because several years pass between projects, Italian horror fans greet each new Argento project with a fervor not unlike mainstream fans facing the opening of a new Terrence Malick film. Argento takes his time, but the results generally set the standard for the rest of the Italian horror film industry, leaving such contemporaries as Lucio Fulcio, Umberto Lenzi, Pupi Avanti, Enzo Castellari, Luigi Cozzi, Ruggero Deodato and even Lamberto Bava behind in the dust. 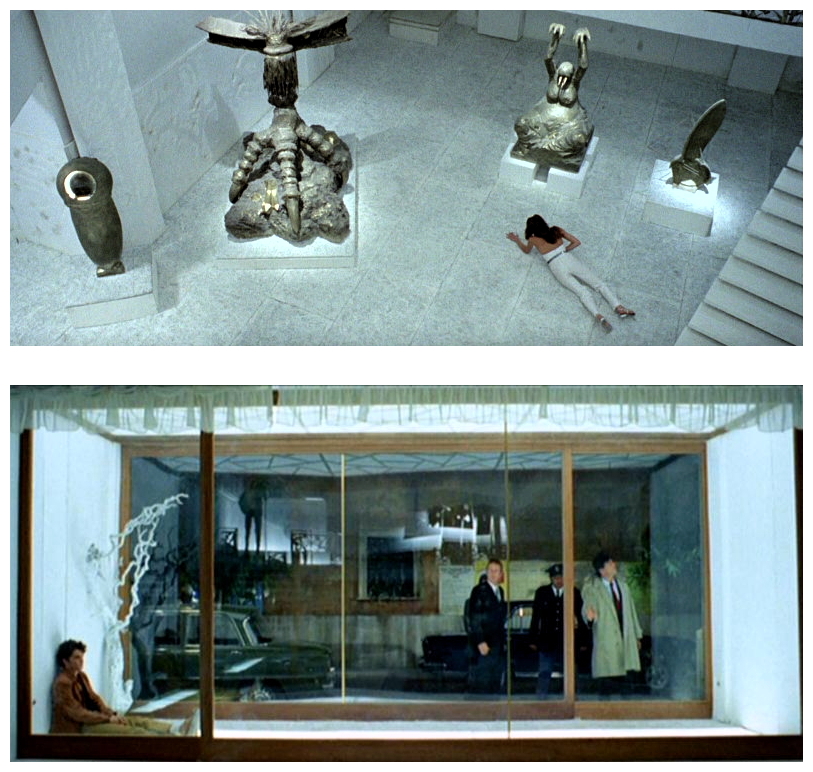 Film Noir (literally meaning ‘Film Black’) takes its name from the preponderance of night scenes and shadows in certain American thrillers of the forties and fifties. The Giallo film takes its name from the colour of the covers of a series of thriller novels published in Italy. ‘Giallo’ simply means ‘Yellow’ even though the predominant colour was often blood red. Bava virtually created the genre with his film The Evil Eye (1963) and the huge success of Argento’s first feature film, The Bird With The Crystal Plumage (1970) also known as The Phantom Of Terror, ushered in a glut of similar films to Italian cinemas. Argento’s themes encompass the horror of random meaningless violence, the extent people will go to protect a loved one, that appearances can be deceptive, and staying sane when the rest of the world seems mad. His technique includes assured and elaborate camera movements coupled with extreme close-ups for punctuation, as well as a skillful use of sound and music to heighten tension or counterpoint innocence with evil. In fact, Argento’s central concept might be summed up by a line of dialogue from his later film Suspiria (1977): “Bad luck isn’t brought on by broken mirrors but by broken minds.” 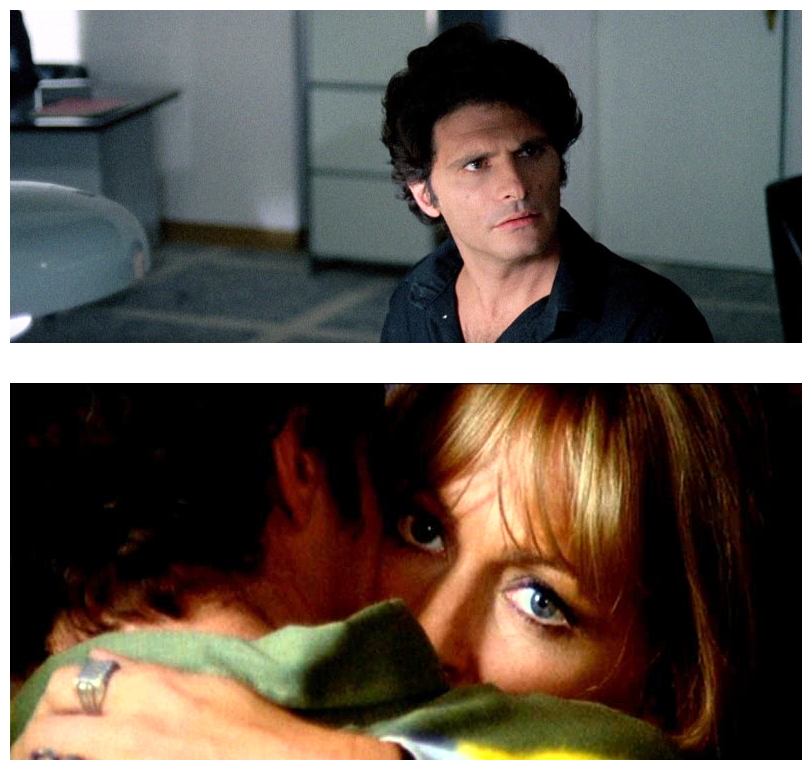 Dario Argento was born in 1940, the son of motion picture executive Salvatore Argento. At a young age he became interested in movies and worked as a film reviewer for one of Rome’s daily newspapers. Determined to break into the film industry, he was given his first big break when Sergio Leone, Italy’s greatest director of spaghetti westerns, commissioned Argento and Bernardo Bertolucci to storyboard his next epic, Once Upon A Time In The West (1968), a highly stylish and stylised western that is arguably Leone’s best work. One day Bertolucci loaned Argento a copy of Fredric Brown‘s novel The Screaming Statue to get Argento’s opinion of it. He like what he read and saw possibilities in some of the ideas. Earlier, he was inspired by Bava’s classic Giallo thriller The Evil Eye, in which a young American tourist witnesses a brutal murder attempt but is unable to identify the serial killer, and she is bothered by something she might have missed. 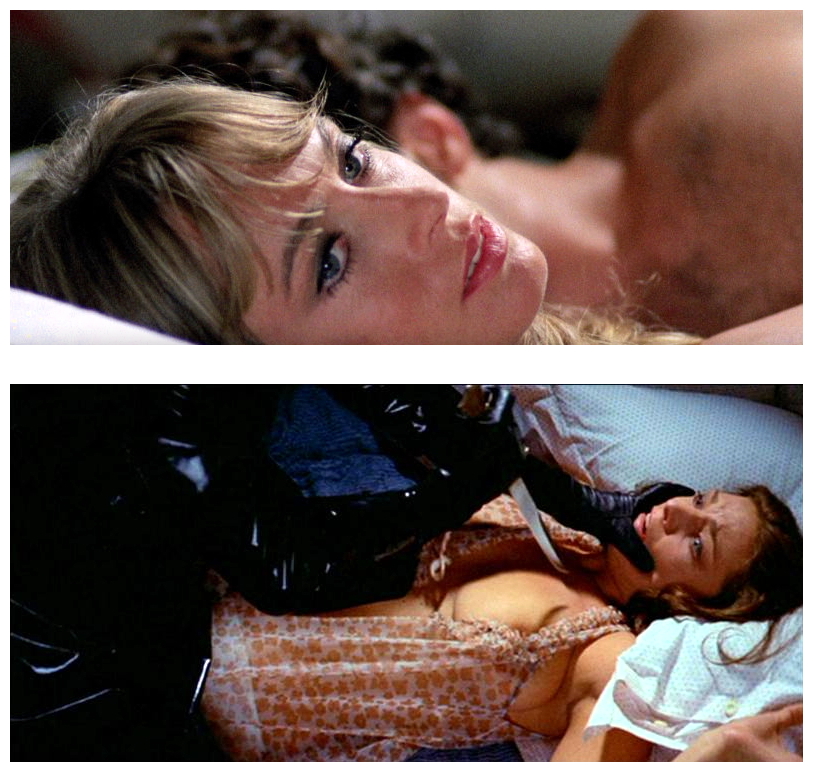 Argento took this basic idea and reversed the sex of the witness, coming up with The Bird With The Crystal Plumage, a suitably intriguing title. He made a deal with producer Goffredo Lombardo to direct the film from his own screenplay. Argento had previously taken the script away from Euro Films because they insisted that it be directed by British filmmaker Terence Young, fresh from his success with Wait Until Dark (1967). However, midway into the production, Lombardo was unhappy with the dailies and sought to replace Argento with Ferdinando Salvatore. Argento countered with a clause in his contract that only Dario Argento be allowed to direct a film from a script by himself – it was him or no film at all. Lombardo relented, and The Bird With The Crystal Plumage went on to become an unexpected box-office success. Argento managed to inject heavy doses of violence and implied sexual titillation in the movie, meshing them in a lustrous and visionary cinematographic style which captivated both the general public (thrilled by the lurid plot elements) and the critics (thrilled by the camerawork). 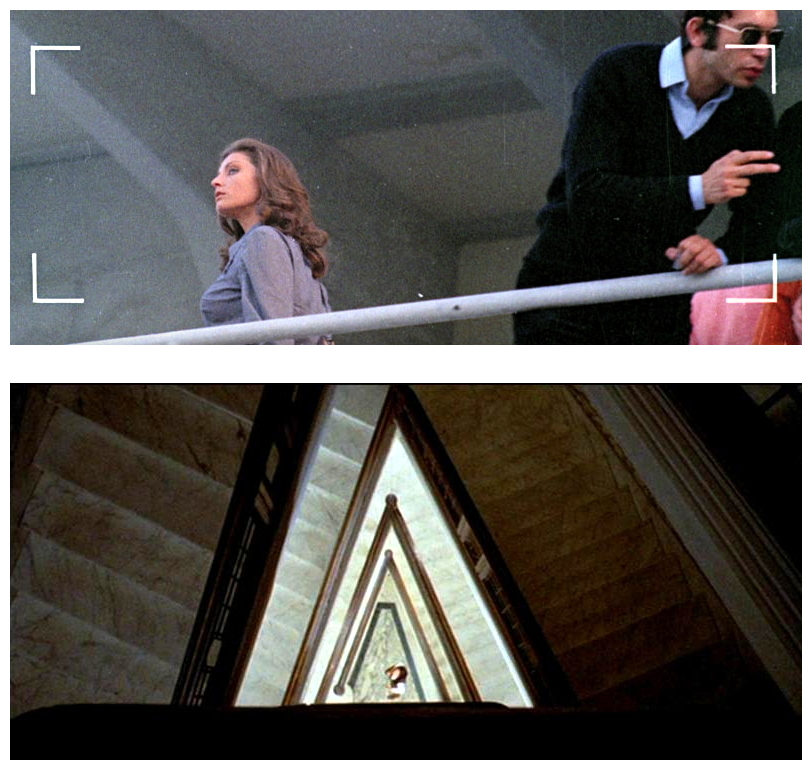 Tony Musante plays Sam Delmas, an American tourist, who happens to witness a murder attempt through the glass windows of an art gallery. He bravely attempts to come to the rescue but winds up trapped in a glass anteroom in the gallery where impotently pounds on the glass doors. However, that is sufficient enough to stop the attack and a figure dressed in black runs away. This opening is the most memorable part of the entire film and serves as a metaphor for Sam’s character. He is trapped out in the open where he can become a target for a killer he can’t get at. The woman who was attacked, Monica (Eva Renzi), survives and recovers in the hospital. Meanwhile, Sam becomes more and more obsessed with piecing the mystery together, much to the distress of his girlfriend Julia (Suzy Kendall). 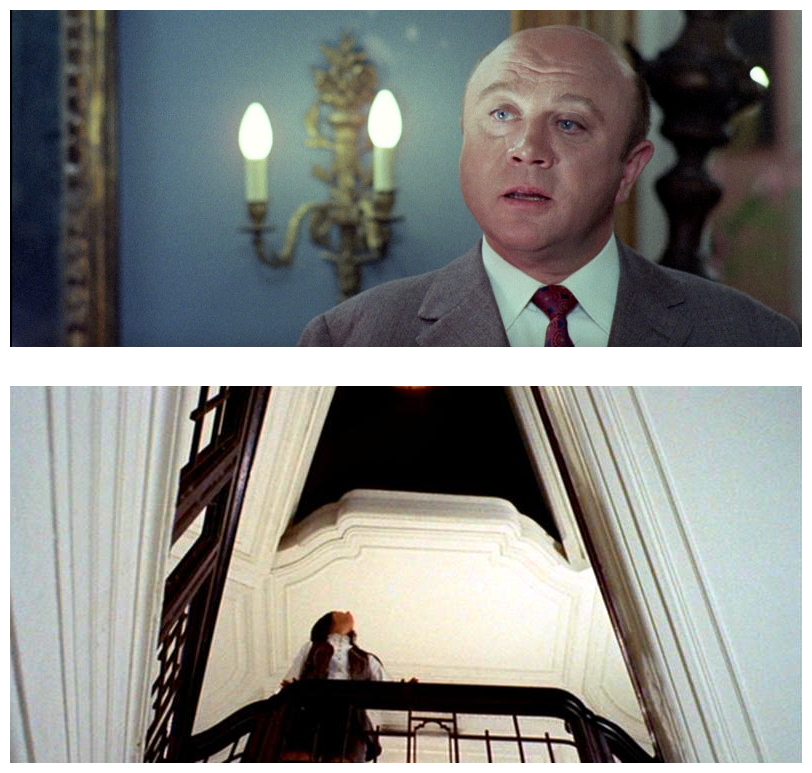 There are some very clever sequences including Sam chasing a figure who resembles the killer into a convention where everyone is dressed as the killer. Sam and Julia begin to get threatening phone calls from the killer with the sound of a bird in the background (the source of the elegant title). There’s a chilling scene when the killer turns out the lights at the top of a long set of stairs, which escapes the attention of a young woman who climbs to the top and then lights a match. Another great scene involves a point-of-view shot of Alberto (Umberto Raho) falling six stories to his death. This was achieved by actually dropping the camera six stories onto a concrete sidewalk. The camera broke of course, but the footage was saved. In fact, my old friend Stanley Kubrick was so impressed with the scene, he did the very same thing himself the following year in A Clockwork Orange (1971) when Alex (Malcolm McDowell) is forced to jump from a window. 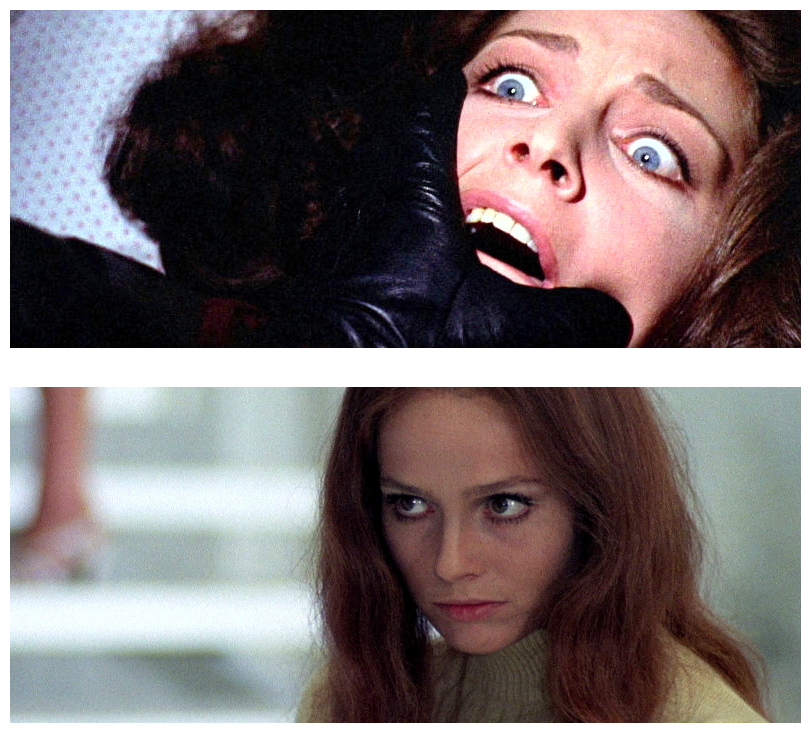 More shocking than suspenseful is the killer’s assault on Julia in which the killer attacks the closed doors that Julia hides behind and hacks on through, and the final attack on Sam in which the police arrive just in the nick of time to shoot the killer and reveal her to be Monica. It suddenly occurs to Sam that what he actually saw was Monica trying to murder her husband rather than the other way around. Many of these elements would be seen again in later Argento projects, not least the recurring plot point of the protagonist seeing something of great importance but finding themselves either unable to realise or remember what they saw. Apart from some jarring editing, The Bird With The Crystal Plumage greatly benefits from Ennio Morricone‘s soundtrack and the work of one of the industry’s best cinematographers, Vittorio Storaro, famous for shooting several dozen classics from Apocalypse Now (1979) to Zapata (2004) and, at seventy-five years old, he’s still going strong. 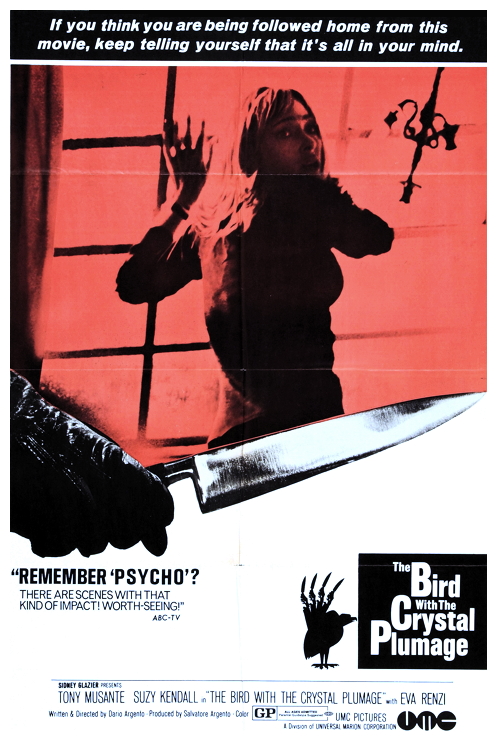 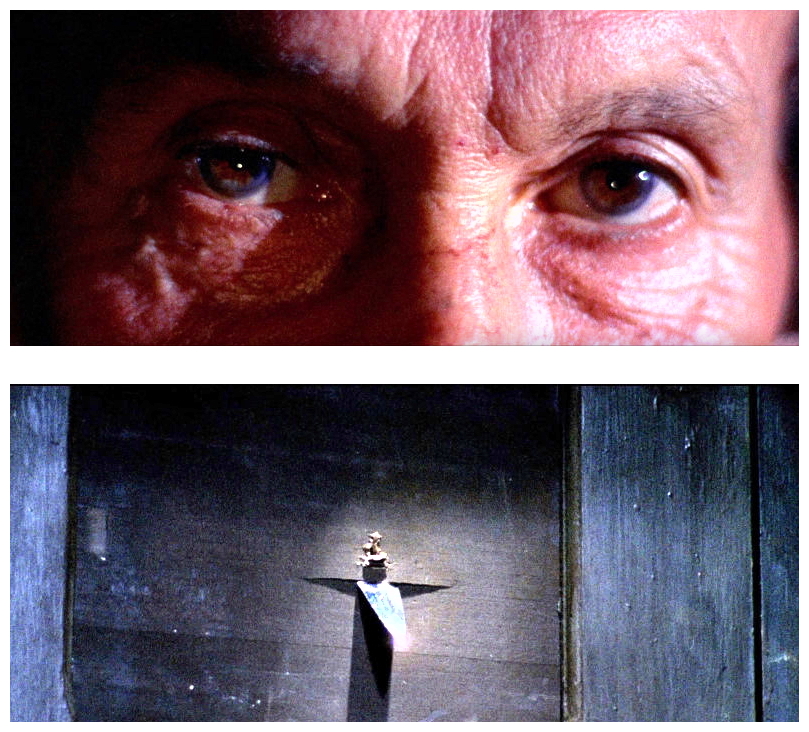 It was an auspicious debut and Argento soon began working on his second feature film, Cat O’ Nine Tails (1971), the second in his ‘animals’ trilogy along with Four Flies On Grey Velvet (1971). The distributors insisted on American actors in the lead roles of to help sell Cat O’ Nine Tails overseas, and so the parts went to Karl Malden and James Franciscus. The plot centres on the belief that an extra ‘Y’ chromosome causes some men to become murderers, but that’s another story for another time. Right now I’d like to inform you that it’s vitally important that you join me for next week’s edition of Horror News, because my horoscope said that if you don’t read all my reviews from now on, the Earth would be destroyed by a disaster of biblical proportions, you know, real wrath-of-God type stuff: Fire and brimstone coming down from the skies, rivers and seas boiling, forty years of darkness, earthquakes, volcanoes, the dead rising from the grave, human sacrifice – you get the picture. Normally I’m highly skeptical of such claims, but I read it on the internet, so it must be true. So sleep well and remember, the survival of the entire world depends on you visiting Horror News every week! Toodles! 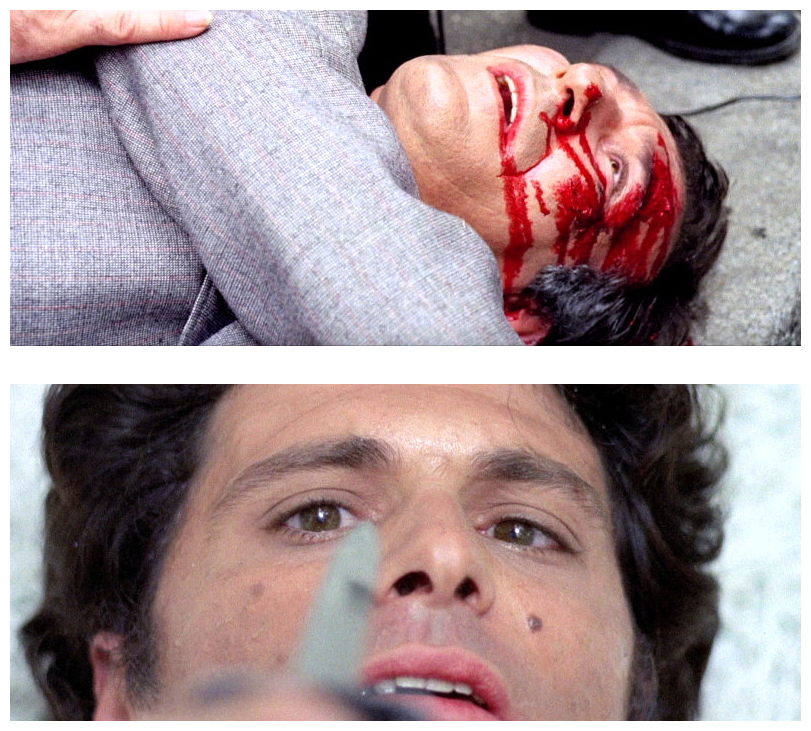 The Bird With The Crystal Plumage (1970)