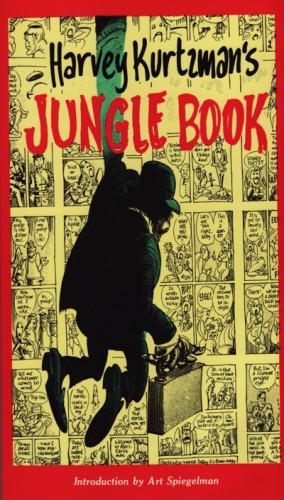 Kitchen Sink Books/Dark Horse Comics announces the re-release of Harvey Kurtzman’s Jungle Book, the pioneering 1959 graphic novel by the creator of MAD magazine that inspired legions of cartoonists, from the underground cartoonists of the 1960s and ‘70s through today’s graphic novelists.

The re-release of this graphic novel, comprised of four satirical stories written and drawn by the late Harvey Kurtzman, returns to print this work that has been out-of-print for nearly three decades. Two of the stories satirize popular detective and Western television shows of the 1950s. The other two stories skewer social conditions in American corporate culture and the American South, respectively.

The second semi-autobiographical story, “The Organization Man in the Grey Flannel Executive Suite,” follows the moral corruption of an idealistic magazine editor while working for a ruthless publisher.

The third story, “Compulsion on the Range,” parodies the TV Western Gunsmoke and shows how the protagonist Marshall Matt Dollin comes to a Freudian understanding that his obsessive behavior to beat a villain in a gunfight is caused by his failure to resolve trauma from childhood: fear that his father would beat him to his “drawer” where he hid a racy photo.

Using dark humor with a twist ending, the final story, “Decadence Degenerated,” skewers the attitudes in a Southern town that lead to violence.

While cartoonist Will Eisner’s 1978 A Contract with God (Baronet Books) is widely credited as being the first modern graphic novel, Jungle Book, in a virtually identical format, preceded Contract with God by nearly 20 years.

This edition of Jungle Book was produced by cartoonist/historian Denis Kitchen and art director John Lind, who, with lecturer Paul Buhle, created The Art of Harvey Kurtzman (Abrams ComicArts), the monograph that won both Eisner and Harvey awards in 2010.

In addition to the four stories, this edition’s commentary by five prominent underground cartoonists contextualizes the life, career, impact and insecurities of the cartoonist who conceived, wrote and laid out the first 28 issues of MAD:

In the book’s introduction, Gilbert Shelton, creator of The Fabulously Furry Freak Brothers, calls Kurtzman “the greatest of all comic-book humorists,” and writes that Jungle Book was one of the 1950s comic books that made him want to be a cartoonist.

In addition to analyzing each Jungle Book story, an essay by Kitchen gives a detailed account of Kurtzman’s career, including the soured relationship with MAD’s publisher, which set the stage for the original 1959 Jungle Book published by Ballantine Books.

In the reprinted introduction from the 1986 edition published by Kitchen Sink Press, Pulitzer Prize-winning graphic novelist Art Spiegelman (Maus) points out how Kurtzman— in addition to being a brilliant cartoonist and editor—found and developed talent, including himself, Zap Comix founder Robert Crumb, Shelton and British animator, screenwriter and film director Terry Gilliam.

This edition closes with a printed conversation between Crumb and fellow cartoonist Peter Poplaski, who debate how the Jungle Book stories compare with Kurtzman’s earlier work for MAD.

A limited edition, slip-cased version of Jungle Book includes an actual Harvey Kurtzman signature. The artist died in 1994, but the family kept a small number of cancelled checks signed by Kurtzman, which were utilized for the special autograph edition.

Says Kitchen: “Harvey Kurtzman is a seminal figure in comics history, most famous for the creation of MAD and the ‘realistic’ war comics for EC Comics. The comic-book industry’s annual Harvey Awards for excellence are named after him. His primary work deserves to be in print, and Jungle Book is arguably the most important Kurtzman work.”