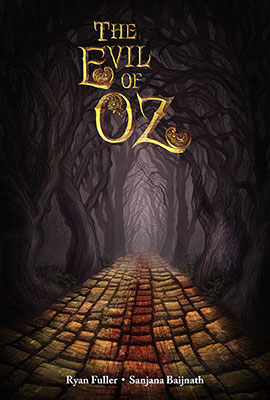 Dorothy is back for another fantastic adventure. Well more like…….. several years later after returning from Oz. Creators Ryan Fuller and Sanjana Baijnath have created quite an artistic variation of the Oz theme taking on a very dark and haunting direction. But then again, this is the kind of direction Horronews.net fans love to see!

When Dorothy arrives home, she is greeted by a bloodbath of epic portions. Her poor aunt Em and family has been slaughtered per way of an all too “familiar” axe. Figuring that her past life in Oz had something to do with it, she clicks her Ruby slippers to yet take on 1 more journey into the fantasy-filled land of witches, scarecrows and munchkins……yep, it’s back to Oz and all its crazy characters.

Arriving, Dorothy seeks out her munchkin buds only to find they have gone the way of the “walking dead-esque (sort of cretins). Now evil and vicious, they attack her like hungry zombies awaiting their next kill. Dorothy, no stranger to chaos brings her trusty axe down upon the minions as she barely escape their onslaught. Something has definitely changed in Oz.

This is how it begins………. An adventure awaits that Dorothy her seeking out her old acquaintances, ones that have drastically changed over the years for the worst

The graphic novel, “The Evil of Oz” is definitely worth a purchase for fans of fantasy and horror. The artwork and illustration is extremely well done offering plenty of dark encounters and nasty bits for your entertainment. Fans of Oz will like the reinterpretation…me I just thought “this would make for a really cool movie someday”

Check it out, it’s a product of hard work and attention to detail ..but most of all supports the independent comic publishers who prefer to self release their creations directly to the public.