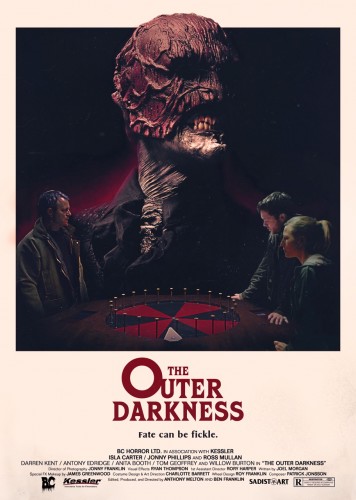 This year the creators of Bloody Cuts are giving the ones we love something special, something dark and something very, very evil! The British filmmakers responsible for the popular horror anthology Bloody Cuts, have conjured up a brand new spine chilling series – The Outer Darkness.

The Outer Darkness is a horror series in the vein of classic anthology shows like ‘The Twilight Zone’, and ‘Tales from the Darkside’, with each episode featuring an individual story told by a victim of the supernatural.

“On Friday evenings in Lynnsmouth Community Centre, meets a group led by Father Jonathan Crowe. Together they share their stories – tales of strange occurrences, horrific events and bizarre encounters that have scarred their lives. Tonight, a young tormented woman called Jenny will share a story of her experience with a game of chance that sealed the fate of her family…”

Bloody Cuts was known for its high-end production values and continued subversion of the horror genre, and ‘The Outer Darkness’ is no different. It’s the most ambitious and terrifying piece of work we’ve have produced yet, with Hollywood production values helping to tell a thought provoking, paranormal story of twisted revelations.

We’ve also teamed with Kessler, industry leaders in professional camera equipment, to not only create this new slice of horror, but also a unique 7 part series of Behind the Scenes documentaries entitled ‘From Script to Scream’ that show the process behind making a short horror film.

‘The Outer Darkness’ also has both a Facebook page and a twitter account @faithindarkness, as well as ‘From Script to Scream’ – the ‘making of’ series following the film’s production online at KesslerU.