Home | Road Thriller IMPOSTER to Bring Terror To the Streets

Road Thriller IMPOSTER to Bring Terror To the Streets 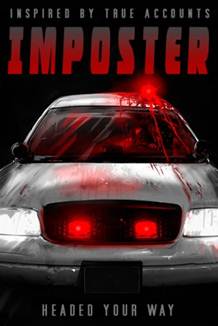 The short film “DEAD SPOT” which was last mentioned along with the launching of the company was put off because of work on another feature screenplay “ZOMBIE WEDDING”.  Moving forward PSYCHO LOGICAL PICTURES will stay focused on feature films.

“IMPOSTER” is a modern day “Fem Jep” road thriller in vein of such films as Joy Ride, Jeepers Creepers, and The Hitcher.  Selz finished Imposter’s thirteen page detailed treatment over a year ago and has completed the 89 page screenplay with Karl (Satanic Panic) Sundstrom.  Marc wants to get the picture rolling soon and hopes to get other companies involved.

Inspired by true accounts, “IMPOSTER” tells the tale of two high school females who are terrorized by a crazed police imposter on their late night drive home from a Halloween party.  Selz said the concept had been in his head for years and now felt like it was a good time to move forward with it.

Selz felt this new project had a unique spin that hadn’t been touched upon in any other previous road thrillers.  “We live in a time, now more than ever, where we don’t know who to trust.  This really happens.  What would you do if  you were put in this situation?  Those combinations make this concept more relevant and fitting,” says Selz.  Marc also felt this was an ingenious MO for a serial killer to trick and lure vulnerable prey.

Selz wanted to make a micro-budget feature that he felt his new production company could take on with a small cast and limited crew.   “IMPOSTER” is psychological!”  Says Selz and very fitting for the new label.  “The entire film takes place on Halloween night, my favorite night of the year! The night people wear costumes and pretend to be someone else.  It’s also the night tricks are played on one another.  That is exactly what the antagonist is doing to these two female protagonists in the film.” “IMPOSTER” is also a nod to John Carpenters “HALLOWEEN” one of Marc’s all-time favorite horror/thrillers which inspired him to become a filmmaker.

With “IMPOSTER” Selz says he wants to grow from his earlier work.  He wants to launch a new round of features with the new production company and hopefully start a franchise that gets into people’s heads.  “IMPOSTER” should give a fresh new meaning to the term “terror on the road.”  Stay tuned for more updates.