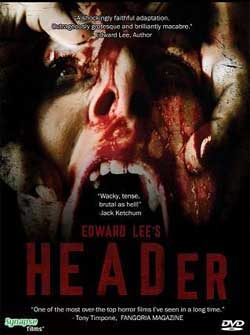 HEADER portrays the grueling psychological journey taken by ATF Agent Stewart Cummings. On the surface, Stewart struggles to solve a string of bizarre murders, but in secret, his life falls into a world of corruption that’s impossible to escape. Deceit, rape, and murder spiral out of control triggering a hellish conclusion that defies description.

Header, a film with a weird name that makes you ask the obvious question of “what is it?” Then of course you have a smattering of marketing quotes that indulge you even further with taunts of a film marked highly offensive and of disturbing nature. Just when you thought you’d seen it all ….comes something else to corrupt minds with a new vision. And fresh off the Synapse films line at that. Header is a film created from an original novel written by Edward Lee.

It really doesn’t take the film long to answer “the” question and get into the sickness. As it is told…..in the manner of “here’s the way things are done around here in the boonies”, …Header is essentially humping heads. Now this kind of sickened focus could have easily been the focal point of a CAT III Asian film…though this time we beat them to it with a US made film. Go USA!

Travis Clyde Tuckton (Elliot V. Kotek) has just been released from prison. With his former estate burned to the ground, Travis seeks out his Grand father to take up residence with and help around the house. Grand pap (Dick Mullaney) as he calls him…. is without legs due to a diabetes spat that went wrong. Grandpap, though stays busy making and repairing footwear locally. As they get to chatting down-home style Grandpap indulges Travis into participating in what they call a “Header”.

A header involves finding a female, knocking her unconscious, kidnapping her, tying her up, drilling a hole in her head and then sawing a slit into the softer brain portion. Got all that? Oh we are not done yet……. Then the indulger has his way with her per literally having sex with her skull. Hence the term “Header”.

Now 1 act of skull banging is alot but this film is full of nonstop skull pokes. Bad taste? yes…. crude?…yes Depraved?…..yes. Though in today’s market, my guess is that will actually turn out to be a plus in the horror community.

But believe it or not there “is” a story wrapped around all this skull sex. Like the Hatfields and Mccoys, Header is a form of vengeance on those who have done one’s family wrong. The wronged family kidnaps a female member of the opposing family and performs a header as a form of ultimate payback. Of course this kills her in the process and leaves her for dead.

While this is all going on we have agent Stewart Cummings (Jake Suffian) on the prowl who is now a member of the ATF. As federal agent, he begins to find these bodies per crime scene call ins and makes it a personal goal to solve the case. If that isn’t enough, young Stu is running a crooked Fed operation that aids local drug dealers to make drops while retaining a $1000 a run. The reason? To purchase medicine for his ailing wife who needs multiple prescriptions just to get by. Stu also has the displeasure of working for a rather ignorant, lazy supervisor who doesn’t seem to ever leave his desk much less get things done. If that all sounds good and dandy then there’s more here than meets the eye. A spiral of violence, betrayal and surprise awaits.

The Header activities continue with frequency with quotes like “Who needs poon when you can hump a head” and “Hump that head boy”! Yep plenty of Rednecking debauchery as twisted as anything you can come up with. To further cause damage, Travis believes he’s doing the lords work by following an eye for an eye revenge streak against the unjust. Fx work on this film is well done and works to the effect of the scenes pretty effective. As a consumer offering, I’m gonna have to say this is for hardcore watchers only.

I’m guessing this won’t be on any Blockbuster shelves for the level of content alone, though it will be available soon for those who need one more reason to go to Sunday School. In all, the film itself has some nice turns, and is well done as a production. Directed by Archibald Flancranstin, this is one film that really can’t be ignored. Bold moves instigate bold reactions. My guess is this is one to be talked about for some time. That is …until someone 1 ups him with something even more depraved. Beyond the obvious content, there lurks a psychological journey as well that Agent Cummings must face. Want a dose of twisted?…then check out “Header”!