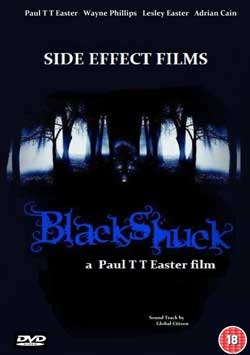 Black Shuck shows what happened to a Suffolk film makers pet dog. After he was murdered while shooting a low budget film 100s of years ago villagers told of a large black dog following young ladies home after dark as a protector to them until the lady arrived safely home. Often she would turn around as home was coming into vision only to see that the dog had disappeared.

Ok so I have been informed that I might be the first internet reviewer to actually bother writing a review for this film. I’m glad of it, too. You know why?

Let me start by talking a little bit about the filmmmaker, Paul T.T. Easter. 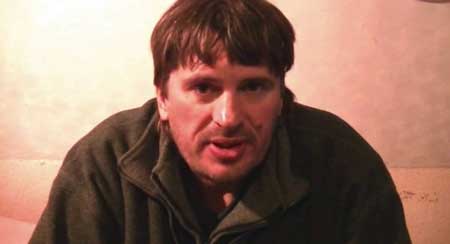 Here’s what I know:

2) Since 2008, he has made and/or starred in a ridiculous amount of low-budget, first person shooter “found footage” style films.

3) His films are (apparently) universally hated and dismissed as rubbish.

Coming into this review, and before I had watched even a moment of it, I was reminded of Ed Wood. You know who that is. Plan 9 From Outer Space. The single worst film ever made EVER. Ed Wood didn’t care if you liked it or not. He had a vision, you see. And while he only made five films in his career, he felt each one a masterpiece. If you didn’t like his films, then you just didn’t “get it”.

Well, in sheer numbers alone, Mr. Easter has well surpassed Mr. Wood. But in attitude, they are very much on the same level. 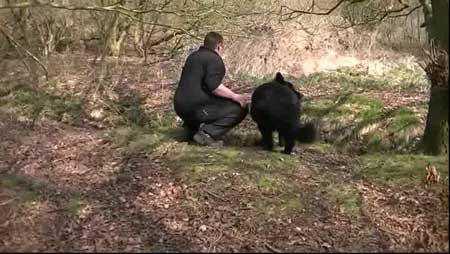 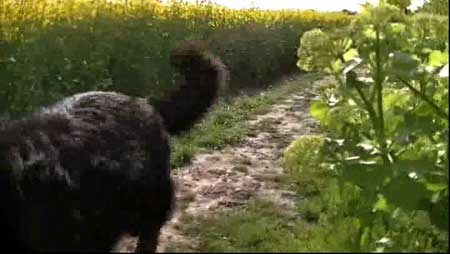 I give this example – I told a friend of mine I was reviewing one of Mr. Easter’s films and my friend told me about an interview he saw with the director. The interviewer told him that his movies sucked (as if he didn’t know) and asked him why he bothered to keep making more. Mr. Easter responded:

“I can explain it with two phrases. One, because I can. Two, go f*ck yourself”.

And he then proceeded to walk out of the interview. I can get behind that kind of chutzbah.

Never mind, let’s not. I’m not sure I could explain it anyway. Something about the evil twin brother of the killer from one of the director’s previous films, and his dog. And the search for a “bitch” to make his life complete. Or something. I have no idea. 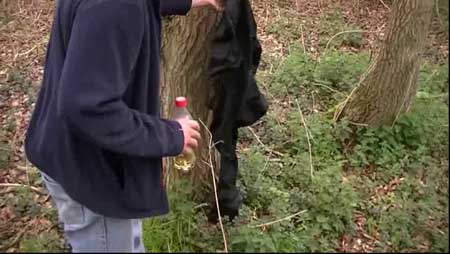 The film is disjointed and surreal, as our main character (played by the director/writer/producer, etc) kills some wayward hikers and steals their camera. He then films himself (and his dog) as they travel through the woods. The character does a running commentary on what he sees and does. He plays with the dog and kills people and digs through trash, all the while talking to the camera.

Like all of his films, this one is totally self referential. As the wildman digs through the garbage, he reads out loud articles and reviews of the filmmaker’s work, picks up dvd covers of previous works, flyers for film screenings, and even shows the video equipment bag (from which he grabs a new battery), all in character of course.

Also, the “black shuck” is his dog, a black German Shephard, which also appears in every film he has made to date. 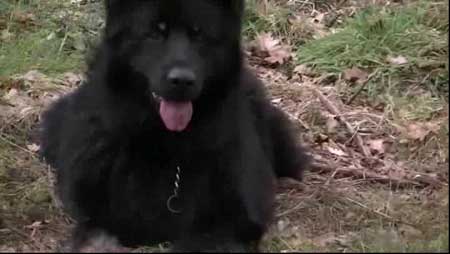 Mr. Easter is known to be quite controversial in the UK, especially relating to his views on the state of independant cinema. This film (at least my copy) opens with a 15 minute clip of the filmmaker giving his “manifesto” concerning this topic. To be honest, it’s the best part of the film.

What really bothers me is that I can’t decide if Mr. Easter is a self-absorbed idiot or a f*cking genius. As the crazed wildman character, his commentary focuses on pollution and other issues. He’s definItely going somewhere with this, and seems like he’s got some sort of important message to convey. If you really think about it, and pay attention, you can actually see the point. Almost. Well, maybe not but it sounded good.

Look, any of you who have read my reviews before know that I will give love to an indie film even if it kills me. And I’m really trying here. You have no idea.

So here’s what I’m gonna do. Ready?

On a scale of one to ten, ten being awesome, I’m giving this film 10 black dogs……