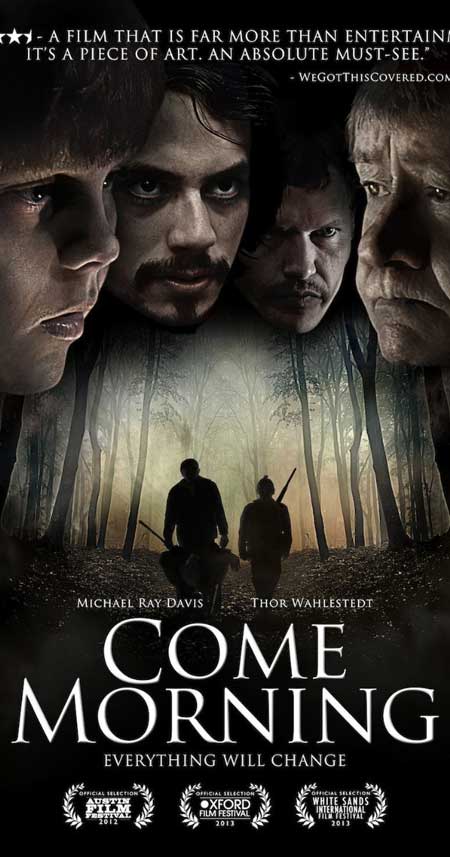 Set in rural Arkansas in 1973, Come Morning is the tragic story of Frank and his 10-year-old grandson and the hunting accident that forever changes their lives.

I really wanted to review this film, and for some reason the file I received has the worst sound EVER. I don’t know if it’s the mix on the film itself, or just a problem with the copy I received. Either way, I am foraging ahead with this.

Come Morning is a crowd funded film, which is one of the reasons I wanted to review it so badly. Using the website Kickstarter, the filmmakers raised half of their budget is a month and a half. The film premiered at the 2012 Austin film festival and won awards in two other festivals.

This is a dark and beautiful story about how one moment can change your life forever.

The film is set in Arkansas in 1973. A young boy, called only D (Thor Wahlestedt) and his grandpa Frank (Michael Ray Davis) set out one cold morning for a bonding deer hunting trip. Grandma Morigan (Elise Rovinsky) doesn’t think it’s such a good idea. Undaunted, the men folk head out for the day.

But this day is not destined to fair well. The boy takes the shot at what he thinks is a deer in the trees, only to find that he has shot and killed a neighbor (Thomas Moore) who was trespassing on their land, apparently on his own hunting adventure.

Marion Mitchell, the neighbor in question, and his family have apparently been involved in a land dispute with Grandpa Frank for many years, so obviously this doesn’t look good. When the cops come, they will not see the event for what it really was.

Grandpa Frank knows what to do – hide the body and pretend it never happened. With D’s help, he sets out to bury Marion somewhere outside of the property line. The bulk of the film focuses on this venture, and how the relationship between them changes as they go about the grim task. Not exactly the kind of bonding they had in mind when this day began. 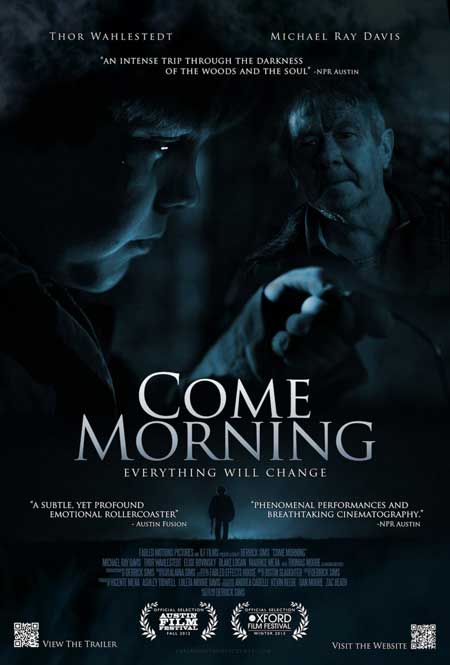 Meanwhile, members of the Mitchell family are set on their feud. As grandpa and D are trying to move the body, we have fences being chopped down by axe in the dead of night. Family members on both sides pulling guns on each other and generally being unpleasant. So Grampa Frank and D have the added challenge of not being seen by either side as they try to get this done.

In addition to the feud-related drama, there are a lot of nefarious things going on in the dark woods. All of which become part of the secret that Grandpa Frank and D must keep.

Now as you can imagine, this becomes a real problem. Some secrets are very hard to keep, and some secrets slowly nibble away at your very soul until you are consumed by the weight of them. Now imagine a secret of this magnitude, and being the child that has to keep it.

Everything spirals out of control very quickly. The simple but macabre mission that Grandpa Frank and D are on becomes complicated when Frank falls down a ravine and is injured. It is now up to the boy to find a way to bring the night to its conclusion. And perhaps, come morning, all will be well.

I’m really annoyed that I can’t hear what is being said by the characters. Again, I don’t know if that is because of a bad sound mix or a bad file. Either way, as a result I’m sure there are a lot of plot points I am just not getting.

What I can tell you about the film is that it is visually compelling. Because I find myself having to rely mostly on just what I see, this is very important. Some of the finer points of the story may be lost to me, but I am able to follow the general events quite well. I had to watch it kind of like a silent film, and the fact that I actually could speaks volumes to its brilliance.

I am able to hear the score. It is very simple, yet emotive. Composer Justin Slaughter (another “best name ever” nominee) has done a brilliant job of creating an atmospheric musical accompaniment to the tragic events unfolding on the screen. The music feeds the emotion of the story without overwhelming it.

Director Derrick Simms, who is also the writer and cinematographer, paints a visually stunning pallet. Most of the film takes the place in the dark, following the events through the night. Low light is hard to shoot in, and yet he made it work in a big way. Combined with the score, the film is simply beautiful.

The two main characters focused on are, of course, grandpa and D. Michael Ray Davis has quite a list of credits, performances varying in style from television to movies. I could tell, even without the sound , that his performance here was very quiet and subtle. In the face of the extraordinary circumstances his character must deal with, he conveys almost everything you need to know through his expressions and body language.

Thor Wahlestedt is a child actor from Sweden. His list of credits is short, but extensive for a boy of his age. While I have not seen anything else he has done, in this film he is amazing. A lot was asked of him in this film, and he truly delivered. If he continues in this profession as an adult, I foresee him doing great things.

So on a scale of one to ten, ten being awesome, I’m giving this film 8 deer.