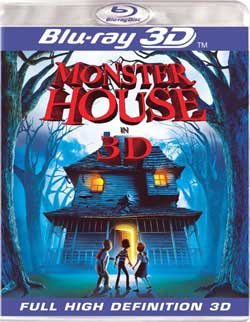 Three kids, DJ, Chowder, and Jenny discover that the house across the street from DJ’s is alive. It eats anything that goes on its property. They try to convince the babysitter, the police, and some weirdo named Skull. They try to unravel the mystery of the house and they have to go inside.

With a strong cast of voice characters and a horror genre crossing children’s adventure tale, comes a new feature from Steven Spielberg titled “Monster House”. Alot has come down the pipe in recent 3D animations films, so it’s always good to see one that has a classic scary edge to it combined with laughs. Especially since it gives me an opportunity to sit down and share the viewing with my children. I’m sure you’ve all experienced in your earlier years that creepy old house down the street that everyone’s afraid of?  Sure, the stories are different but it’s all part of our days of youth when anything that looked old and dark was considered off limits, and because of that was the prime object of our attention.

This idea is what happens to reside across the street from our suburban family, who’s son DJ has a rather obsessive interest in the house and the mean old grump who yells at children who invade his lawn. With a telescope in hand, he witnesses several of the neighborhood children lose their toys, bicycles and anything else that falls onto the property. Steve Buscemi plays the voice of a convincing Mr. Nebbercracker who’s cranky demeanor has the children frightened and succeeds at barking at anything that moves in his vicinity.

DJ joins up with his friend Chowder and plots a scheme to get to the bottom of what that house holds mystery to that they just cant place their finger on. His parents go away for the weekend while he is left accompanied with a flaky babysitter named Zee and her obnoxious boyfriend named Bones. Though this also gives them the perfect opportunity to explore the mystery house as the babysitter indulges in her own business. Great character voices arrive with actors Catherine O’Hara, Jason Lee, Kevin James, Maggie Gyllenhaala and Mitchel Musso. It’s a ride of film that really brings on some fantastical animated visuals of a haunted house that likes to eat kids, dogs and anything that makes it angry. When Nebbercracker  suffers a stroke, the boys learn real quickly how deadly and dangerous this house is and what secrets lay waiting in the basement. Horror fans will love the almost metaphoric transformation of the house into an evil entity that get even angrier as the film progresses. An inevitable confrontation lies ahead and brings with it alot of fun and good humor.

This DVD release finally finds it’s way onto a spectacular DVD blu-ray edition that comes equipped with 3D glasses especially optimized for 3D television. Not only that…. but 8 exciting featurettes are included making this the perfect edition of this runaway hit film. High definition, 3D television….. I couldn’t imagine this release being any better. Good times for the whole family with some creepy Halloween chills to boot.

There is some great trivia pieces on this release courtesy of IMDB that will be of interest to fans.

The second film to be released in REAL D’s digital 3D format.

The film used 3D motion capture techniques to digitally record the physical performances of the actors before “skinning” them with their animated forms.

The motto on the police car reads “We Wanna Help”.

For the Italian version of the film, Bones and Skull have been renamed “Punk” and “Freak”.

The wallpaper in DJ’s room is the same design as Woody’s shirt in “Toy Story”.

Homages to various Stephen King stories abound. The idea of a house that comes alive and eats people can be found in the third installment of King’s “Dark Tower” series, “The Wastelands”. And while in the house’s basement, Chowder shines his flashlight on a mechanical monkey much like the one found in King’s short story “The Monkey”, collected in “Skeleton Crew”.

There are several references to both Steven Spielberg and Robert Zemeckis’ films in ‘Monster House’: The toy monkey from Close Encounters of the Third Kind (1977). Trees that come alive is derived from Poltergeist (1982). The floating leaf at the beginning of the film is a nod to the falling feather from Forrest Gump (1994). And the basketball brand-named Wilson is a reference to the volleyball of the same name from Cast Away (2000).

For the German version of the film, Bones, Skull and Chowder have been renamed “Punk”, “Freak” and “Ketchup”.

The first animated film to be made using Sony’s animation rendering software.