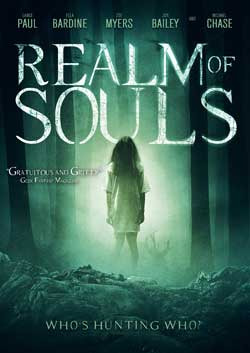 Last year, a group of filmmakers set out to investigate 13 of the most haunted locations in Georgia in order to gather footage of the supernatural for use in their next horror film. They would never return…

I literally don’t know where to start with this film. I really don’t. I’m so frustrated and confused after watching Realm of Souls I don’t know how I can even begin this review. The film begins promising enough, Realm of Souls is an independent horror which is totally cool by me and is set up nicely in it’s first scene. We open with a group of four ‘sexy’ youngsters in the woods at a supposedly haunted site. All four are extremely horny and I wouldn’t be surprised if you thought you had set yourself in for a P*rno. The two couples separate and begin having some explicit sex – pretty raunchy for a horror film. Of course something is in the woods watching and before long it comes and ruins the sex party by slaughtering the naughty couples. So there is the first scene, nice and simple. Sex, blood, bad acting all the ingredients for a fun silly horror film. *SIGH* Well this scene was definitely cut and pasted from another film because the rest of the film really has little to no connection with the opening scene be it in tone or narrative.

Now here is when things get mighty confusing. I think of my self as a moderately intelligent man but this film had me stumped in all sense of coherence and understanding. The filming technique swaps from the traditional sense into found footage. However not just with one or two camera’s but I’m pretty sure using about six different cameras with two different groups of characters at two different places in time. It took me about forty minutes to figure this out and only an hour in is there a clear explanation about to what the hell is going on. Apparently the first group in the timeline is a collection of film makers and actors going around to different locations in America to film haunted locations.

Why they have actors is a mystery to me, it is never made clear if they are filming a documentary or a feature film. The people in the second timeline are looking for the first group who supposedly are missing. The footage that is shown cuts between found footage to traditional shot scenes which just adds to the mayhem of any understanding of the plot or characters. 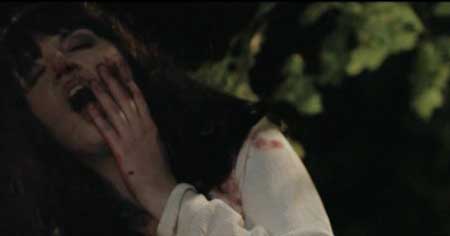 Halfway through the film the rescue group come across the first group’s footage in the haunted woods – yes all their equipment is still set up and the audience are shown at least twenty minutes of the previous groups footage. AGHH it’s so god-damn confusing and weird. I can only really call them by their group names because there are really no characters that are fleshed out just groups of people talking. Once the rescue group finish watching the footage they too go looking in the haunted woods and the found footage is scrapped which is a huge relief. One by one the group is slowly picked off and this is where the film KIND OF redeems itself. There are a few grisly and gruesome deaths, a reminder that you are watching a horror film even though there is very little scares in the first half of the film. These are fun to watch and would have made a much better film if all the found footage crap had been scrapped.

The more bad horror films I watch (and I don’t mean good bad) the more I realise how important editing is in a film to create the terror and tell a cohesive narrative that will suck in its audience. Realm of Souls is abysmal in this department with such lousy editing that it doesn’t allow any of the narrative to make two bars of sense. There are some cool shots and scenes in the film but because of the way it is cut together barely any of it works. Apart from the editing the music contrasts too heavily with what sounds like a score made in Garageband in some parts and heavy metal overpowering the dialogue in others.

There is some decent acting coming across quite naturalistic in the first half which is endearing and makes the found footage a bit more believable but not knowing any of the characters apart from their professions it’s impossible to root for any of them. Realm of Souls tries to be many things but if it had stuck with the vibe it created in its first five minutes it would be a lot more successful than the hellish mess it ends up being. 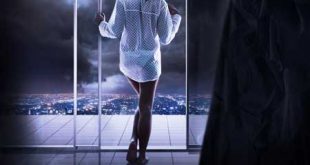