FIVE MINUTES was created for zombie-loving gamers who enjoy interactive films and the latest web technology. Produced by two students from the Filmakademie Baden-Württemberg, FIVE MINUTES is a live action zombie gaming experience that allows users to interact with and alter the storyline. 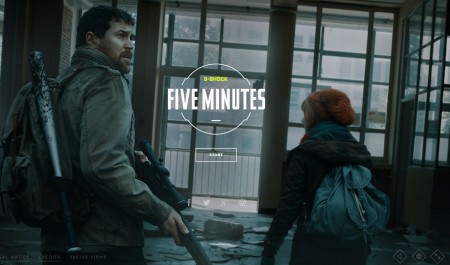 FIVE MINUTES is the ultimate zombie countdown. The game is based on the concept that the first symptom of infection is memory loss. John, the main character, is fighting to survive after being injured during a battle with a zombie. Only five minutes remain for John to figure out his fate and for the player to help him and his daughter survive up to the twisted climax.

FIVE MINUTES is more than just your average short with some zombies thrown in. His fate is entirely dependent on the user’s decisions.

Players have to help John fight the infection by keeping him focused while he is reaching for his memories. Only if the user succeeds and John holds onto his memories will he survive. This raises the stakes of the game, involving the user to an unprecedented degree.

In order to create FIVE MINUTES, the producers of the project developed a special HTML framework, meaning that the game can be played on all desktop and tablet devices with no app installation, and is also suitable for a variety of users as it offers three levels of difficulty.

FIVE MINUTES Can be played here.