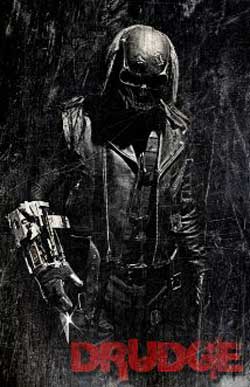 What was supposed to be a romantic night in for a young couple, quickly turns into a terrifying encounter with Drudge… A new face of horror is born.

It is short films like Drudge that remind me how powerful and important horror shorts can be. To put it simply, I was in awe throughout the whole 9 minutes of its runtime – and by the looks of the amount of awards it won, so were many others.

Like so many before it, Drudge begins with a young, middle class couple, very much in love. It appears like any other night, but soon descends into a fight for their lives. Despite the fact that this is a well-worn formula, Drudge does it in a way which still makes it gripping and exciting. We are introduced to the character right at the start, and this sense of forewarning only helps to increase the tension and enjoyment of the film. The music, the cinematography, the effects, the lighting, the acting, were just perfect. Everything just seemed to come together for this one, and it was a delight to watch – as delightful as horror can be, of course!

An obvious comparison would be between Kheireddine El-Helou’s Drudge and Wes Craven’s classic Scream, as both begin with a lone female in her house being stalked by a crazed, masked killer. However, Drudge feels a bit edgier, with its mechanical gadgets that make murder much more of a sport. The character of Drudge reminds me of Predator as well, and I think that he has the potential to join the great horror villains one day, up there with Freddy Krueger and Leatherface. The writer/director says that he was inspired by horror and also superheroes, and so wanted Drudge to be a combination of both. This is indeed a fantastic idea as it’s not something that’s seen too often. Whilst we do sympathise with the victims in these sort of films, I can’t help but enjoy watching how brutal and relentless Drudge can be, and look forward to what fun, creative toys he has up his sleeve.

It is interesting to note that in an interview that Kheireddine El-Helou gave with The Horror Appraisal on YouTube, he admitted that he actually built the whole costume that Drudge wears himself, and that it is even fully functional. Talk about a man with many talents!

And the good news is that – according to their IndieGoGo page – Drudge is just the opening scene to a feature length! This means that hopefully in the not too distant future, there’ll be more horror antics coming from the ‘psychopath engineer’, as Drudge has been lovingly dubbed. Hopefully, this’ll explore who Drudge is and where he’s come from, as this short film has acted a bit like a teaser trailer to be honest, and poses lots of questions, leaving us wanting more. I for one, absolutely cannot wait.