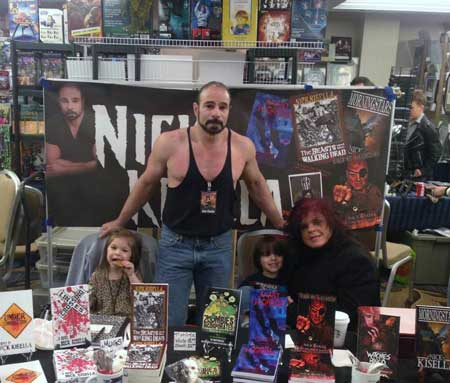 Janel- Tell us what you are currently up to now?

Nick Kisella -This is always a busy time of year for me.  I love to write in the fall and winter.  The weather is just perfect for the material I write.  I’ve got quite a few things going on right now too.  Between finishing up with ‘Lilith’s Apple’, editing stories for a few authors I know and spending time with my wife and twins, I’m also in the planning stages of adapting a series of films titled ‘The Soulless’ by Chris Eilenstine into novels.  He’s got an interesting spin on the zombie genre and I’m looking forward to delving into it over the next few months.   I’ll also be working with wrestler/actor Andrew Anderson on his bio.

Janel- Why did you decide to write with Deana?

Nick- Deana’s a good friend, a member of my extended family and it was something we’d been kicking around for a while before actually taking the plunge and writing it.  It was fun and she was easy to work with.

Janel -How do you feel this story differs from the work you do?

Janel- Lilith’s Apple is a very dark fantasy rooted in the story of Adam, Eve, Lilith, and Snow White.  I haven’t written this sort of a fantasy since I was in my twenties, and being forty-eight, well, that was a long time ago.  I saw it as a fun challenge and a way of flexing some old literary muscles that I hadn’t used in a long time.  I’d planned on revisiting that type of material before Deana and I did Lilith’s Apple, and this was definitely a great way to get back to it.

Janel- Could you tell us about any upcoming appearances you have?

Nick-This coming weekend, October 24-26, I’m a guest at Chiller Theatre.  Personally, I think that’s the largest and the best horror con on the east coast.  I’m looking forward to it because it’s a great way to stay in touch with readers, new and old and everyone there is just great to hang-out with.  Lilith’s Apple will debut there as a paperback.  Then I’m a guest at the Flemington Punk Rock Flea Market on November 16th.   That looks to be a fun event that benefits the local food pantries.  I’ve got a few other local book signings but dates and times still have to be narrowed down. 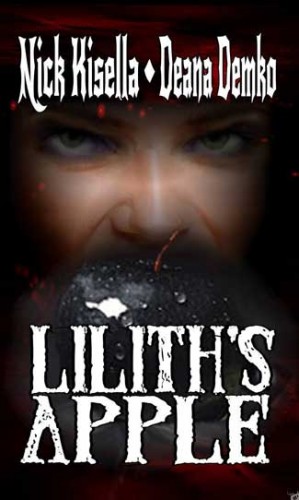 Janel- Tell us about Lilith’s Apple?

Nick- I can give you a straight summary, but I’d rather explain what’s behind the story.  Lilith’s Apple is very much about how people are perceived.  Yes, it’s a twisted combination of a fairy tale and a biblical story, but it’s much more than that.  It’s the story of how a woman was abandoned, exiled from paradise because she didn’t want to be dominated or controlled.  It shows how far she’s willing to go to get revenge for all the pain and hardship it caused her.  Everyone thinks she’s evil, but they don’t realize what she’s had to endure in order to merely survive.  The seven deadly sins have very important roles in trying to prevent her from succeeding, but even they have an ulterior motive.

Janel- You received such great reviews for Lilith’s Apple, do you feel you have to up the ante after each book?

Nick- It would be great if I could, but I don’t think that’s possible for me to do intentionally without upsetting the natural balance and flow of a story.  I write in a few different genres too, so in some ways comparing novels would be like mixing apple and oranges.

Janel- Who are some of your all-time favorite writers/authors

Nick- I enjoy some of Stephen King’s material, Dean Koontz, and Ray Garton.  They’re great at writing people, making them real, which is important to me.  I also like to read Clive Barker, Tanith Lee and similar material because it’s vivid and easy to fall into.  I like getting lost in a good book.

Janel- Do you have any habits that you stick to when you write?

Nick- Too many…….
I write at night.  I always have even when I lived alone, though now that I’m married with twins it’s easier at night anyway.  I just find the solitude comforting when I write horror.  It’s easier to ‘go there’ and be a part of the story as it takes shape as words.  I never sleep much but it’s even less when I write.  I enjoy it in spite of that, especially with strong coffee, and a good ecigarette.  I stopped smoking regular cigarettes years ago and use a fake one now.  I eat a lot of junk food.  Anything from dry cereal, ice cream, cookies- if people knew how much junk I ate they’d wonder how I’m still alive much less able to write.   I use music sometimes for the mood too.

Janel- Are you planning on writing another book?

Nick- Always.  I have sequels for ‘Morningstars’ and ‘The Beasts and the Walking Dead’ in the works, as well as what I mentioned earlier on.  I’m always either writing something. 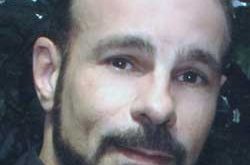