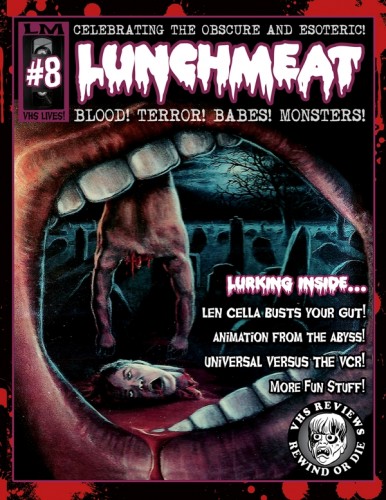 Crank up your VCR, slip in your favourite VHS tape as background and kick back with the long-awaited 8th issue of LUNCHMEAT, the brilliant magazine from the Lunchmeat VHS website. A zine which leaves most major publications in the dust, it’s a labour of love for Josh and the gang and also an extremely well written, well produced piece of film culture.

With a deep appreciation of the weirdness that was released throughout the glory years (and the less-than-glorious years too) of the VHS medium, the writers of Lunchmeat bring you content which you will not find anywhere else.

Behind the glossy cover and upon the professionally realised pages there is once again a wealth of oddities to enjoy. After Josh’s excellent editorial, there are 13 full page obscure VHS reviews that go beyond the call of duty, followed by a very cool interview with action movie veteran director Paul Kyriazi.

A frank and entertaining interview with cult film creator Rick Sloane is up next, then a fascinating look at the scandal of the Video Warehouse label. A personal favourite of the issue is the fascinating interview with Martin Campbell on the practical effects extravaganza that was Cast A Deadly Spell, a gem of a movie which is still only available on VHS as far as I’m aware. It’s a shame, as it’s a very cool film.

After a VHS themed crossword and a look at obscure wrestling tapes, it’s onto the regular feature in which the mag takes a look at weird promotional items given away to promote a variety of VHS delights. My favourite has to be the Kindred bib, although I’d love one of those awesome Terror Vision watches. An interview with comedian Len Cella is a little tough to get through as it’s presented as handwriting which has been resized, but it’s still a worthy read!

There’s also a look at rare animated tapes and an interview with notorious schlock auteur Fred Olen Ray, a look at a notorious video related court case and other delights. Another wonderful issue of a genuinely interesting and beautifully produced magazine. Essential reading for any fan of a much missed era of popular culture. 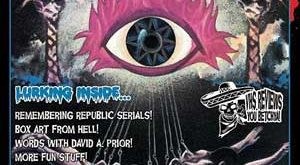